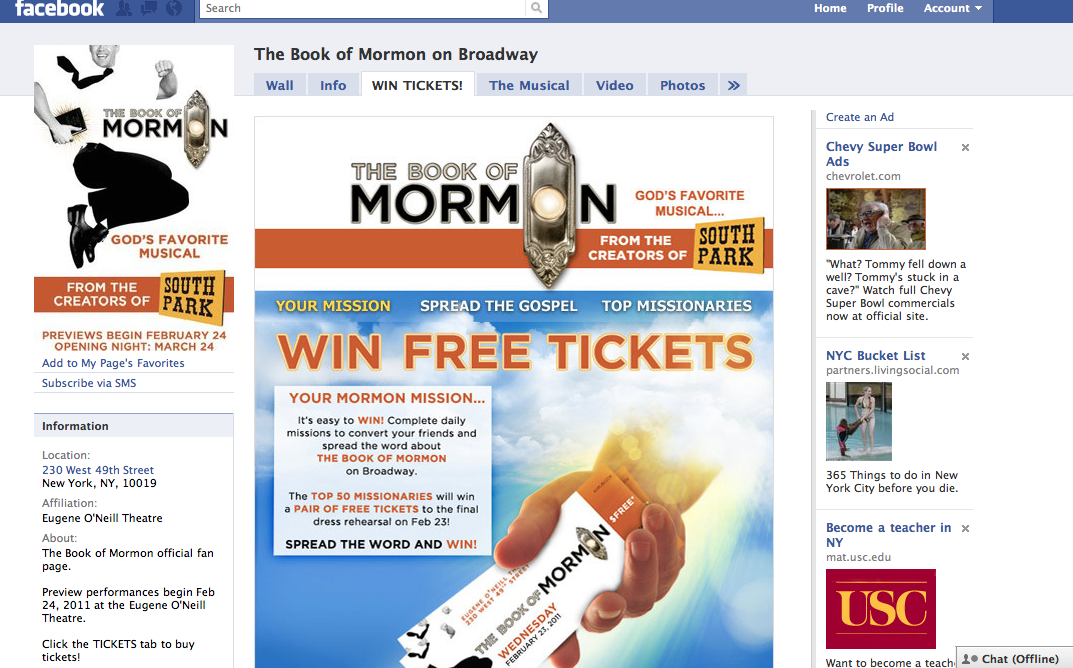 The Broadway shows “The Book of Mormon” and “Chicago” couldn’t be more different on the surface. One follows two mismatched Mormons on a mission and the other tells the story of murder, greed and the luster of celebrity in the jazz age through a series of Vaudeville inspired song and dance numbers.

The two productions have both taken creative approaches to appeal to theater lovers and broaden their audiences. Reaching across the footlights to connect with patrons, both shows are getting noticed for the clever application of social networking tools.

Set to open this spring, “The Book of Mormon,” a new musical by South Park creators Trey Parker and Matt Stone, as well as Tony Award winner Robert Lopez, is already making its presence known on popular social networking websites.

Freelance writer Matt Patches, 24, said his online connection with the production first began when the “The Book of Mormon” Twitter account came knocking.

“I only followed them because they followed me,” Patches said, referring to the site’s terminology for interacting with other users. “They’re really trying to push social media. I haven’t really seen others out there doing it the way that they have.”

Patches attended a special 25-minute preview performance of the production last month, after the show’s press representatives invited his news outlet, Collider, to stop by.

He said the invite was unusual and unexpected; Broadway shows rarely reach out to sites like Collider, which focuses on movies, television and tech content.

“There were some Broadway writers there that were covering their beat, but a lot of us cover humor and movies,” Patches said. “I think they’re saying to the non-theater people that ‘Hey, you can go see this show and it will be up your alley too.’”

Ian Klein, dramaturg and M.F.A. candidate at Columbia University, also attended the show preview. Moments after sharing his thoughts on his website, “The Book of Mormon” sprang into action via Twitter. 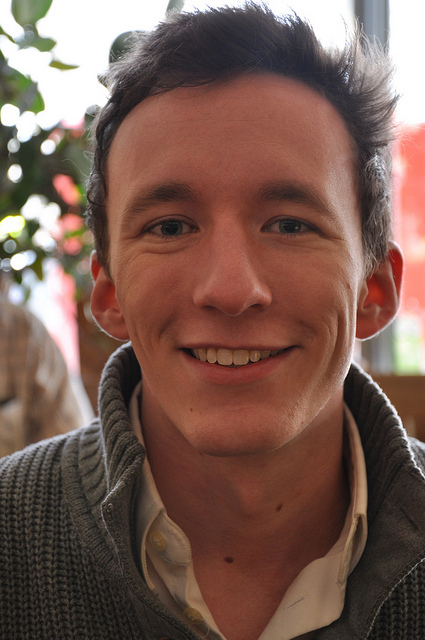 Ian Klein, dramaturg and M.F.A candidate at Columbia University, was one of many invited to a preview performance of "The Book of Mormon." Photo by Ryan Chavis.

“I went home that evening and I had taken notes and everything,” Klein, 25, said. “I wrote an article and within minutes it was picked up by “The Book of Mormon” Twitter feed – I think they really appreciated the content.”

“The Book of Mormon” social media campaign has implemented a game on Facebook that allows users to perform a set of daily tasks to earn points and ultimately spread word of the production with their friends online. The top 50 “missionaries” will receive two free tickets to the final dress rehearsal of the show Feb. 23.

On the other end of the musical spectrum, the revival of “Chicago” is proving that after 14 years on Broadway, it too can benefit from social media. The production offered a performance Jan. 30 for Facebook fans, free of charge.

But there was a catch: fans had to spread word of the show’s Facebook page with 10 friends in order to gain admission to the special performance.

Despite its age, “Chicago” is still kicking its legs sky high. The production announced earlier this month that Christie Brinkley would be joining the cast as murderess Roxie Hart, a message that was heralded on both its Twitter and Facebook accounts after Brinkley herself made the announcement on “Oprah.”

Still, Klein said, even with the creative latitude older shows have through social media, they can still be at a disadvantage.

“It’s easy for new shows to say ‘Yeah, we’re young, hip and with the times,’” he said. “But with the shows that have been running a long time, they need to constantly re-evaluate their marketing campaigns and that can be hard.”

Broadway shows expand audiences via social media | Memoirs of a Southern Transplant says:
March 1, 2011 at 12:39 am

[…] One of my latest stories posted on Pavement Pieces.  Click on the link to the left to read! Ian Klein, dramaturg and M.F.A candidate at Columbia University, was one of many invited to a preview performance of "The Book of Mormon." Photo by Ryan Chavis. […]