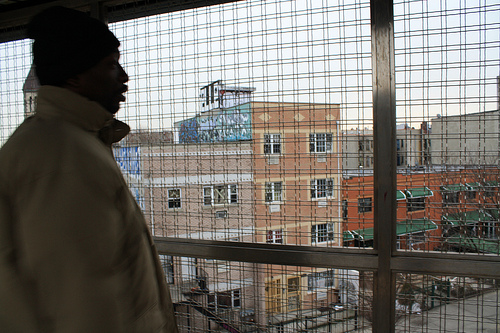 Alex Johnson, who has lived in Bushwick, Brooklyn for ten years, points out new housing near the Kosciusko train stop. Photo by Gabrielle A. Wright.

Residents of Bushwick on gentrification

Looting, fires and closed down business brought Bushwick, Brooklyn to a standstill during the historic black out of 1977. But ash and vacant buildings are fertile ground for revival. Since then, Bushwick has become a magnet for struggling artists and Williamsburg overflow, and now like most gentrifying neighborhoods across the nation: a clash of cultures and agendas.

“The population changed,” said resident Alex Johnson, 36. Looking out the window and firmly planted against the sway of the J train, he pointed out new housing developments as they whizzed by. But it isn’t just new developments that have taken over, a neighborhood that was primarily black and Hispanic for decades is seeing an influx of white residents.

“This is one of the closest [neighborhoods] to Manhattan so there’s a lot of white people in the area now,” said Johnson. According to the U.S. Census, non-Hispanic white population more than tripled between 2000 and 2010.

Johnson said with his new neighbors comes more police and organic food stores.
“They got a lot of things that haven’t been here five years ago,” he said.

Beneath the Flushing Avenue elevated train stop on the JMZ train lines are bars and cafes retrofitted into spaces that once belonged to family owned businesses. Street vendors sell the same goods sold in the Walgreens they’re set up in front of and an IHOP, not yet two years old, shares the block with small delis selling similar breakfast items.

Between the Flushing Avenue and Kosciusko Street stops along the J line, older residents say Bushwick is truly found on side streets like Hart or Dodworth where residents have childhood memories and have seen the streets go from drug infestation to “ghost-town”. Yet, newer, younger residents point towards a different Bushwick, found in loft spaces turned into farms and auxiliary art projects near the L’s Jefferson Street stop. The train lines stretching and screeching across Bushwick dot the gradient of gentrification throughout the neighborhood.

Each train stop spills out Bushwick newbies attracted by affordable housing and art gallery space alongside long-time residents with a hunch their rent may be going up soon. As Johnson, who has lived in Bushwick for ten years, stepped onto the J’s Kosciusko Avenue platform he grimaced at the renovated spaces on the avenue.

“Money makers are coming out here and can rent an apartment for $2500,” said Johnson.
“Affordable housing so they say. Section 8 doesn’t apply to that which is what we need. We can’t afford that,” he said.

According to PropertyShark.com’s Brooklyn home price map, homes in Williamsburg, the gentrified neighborhood next to Bushwick, are priced 174% more than they were in 2004. In Bushwick, the increase is by 14%. Condos are selling fast but Johnson said the increased rent and influx of new residents prices long-time Bushwick residents out. As rent goes up, businesses close down or move out.

“We may not be able to stay here,” said Lars Kremer, founder of Airplane, an art gallery on Jefferson Street . “There are four new buildings going up. We’re probably going to have 200 new people on the block by the end of this year. A new bar just opened up down the street,” he said.

Kremer has lived in Bushwick since 2000.
“I’ve seen it change a lot,” he said. “In many ways it will be good because of the increased exposure, but then there is also the looming threat of rent increase that might happen. I have mixed feelings about Bushwick,” he said.

The increased exposure has brought The Center for Urban Future’s 2012 State of the Chains study reports that there is a 2.6% increase in the number of chain stores across Brooklyn. Fifty-five chain stores are in Bushwick. An additional 34 chains are shared by both Williamsburg and Bushwick where the 11206 zip code is shared.

For Meagan Davis, a newcomer to Bushwick from Dallas, Texas, there are just enough familiar coffee shops and stores with newly hung drywall to not ruin the “gem” of her new home. However, if it becomes too much like Williamsburg, Bushwick’s gentrified neighbor, she would move.

“Williamsburg just doesn’t have enough grit,” said Davis, who has been in Bushwick for about six months. “Williamsburg is like Disney Land. Bushwick still has family, still has grit. Bushwick has something that to me is just real,” she said.

To Johnson, that “realness” is just a freak show for new residents. Beneath the Myrtle Avenue stop on the J line, a woman who was visibly incoherent rolled around on the ground reaching for her purse as stereotypical hipsters stepped around her.

“You’re in the hood, you see what’s going on, that’s real,” said Johnson, who believes Bushwick is becoming more racist. “They’re scared so they keep walking,” he said.

Torn between the pros and cons in his neighborhood, Johnson believes that gentrification in Bushwick can be felt more than it is seen. He said drug dealers weren’t on his corner anymore, but on the other hand, the family-owned dry cleaners that would clean clothes for free were also gone.

“They’re taking the danger out of Bushwick but taking the people out with it,” said Johnson.

[…] it was Bushwick at the time. But not how Bushwick is now, there was nobody there. I’d literally eat one meal a day and save the money to busy acrylic, […]