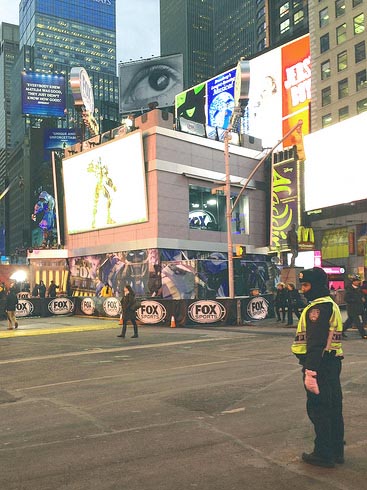 NYPD is in place at Times Square for Super Bowl week. By Zoe Lake

NYPD is in place at Times Square for Super Bowl week. By Zoe Lake

As frigid temperatures and Super Bowl fever sweep the city, New York businesses are gearing up for what is sure to be a busy weekend. Dining deals, party packages, and drink promotions mean big business, especially for those establishments close to Times Square, where ‘Super Bowl Boulevard’ will draw large crowds throughout the week with events including a toboggan run, and NFL autograph tent, among others.

Meg Sylvester, 26, manager of Social Bar .com on 48th and 8th, is anticipating a major increase in patronage over the weekend, and said they are prepared to handle the Super Bowl crowds.

“With our close proximity to Times Square we are anticipating a larger crowd,but its really just about being prepared. All staff will be on hand, it’s going to be a great weekend,” she said.

Establishments near Times Square have been warned that road closures surrounding the area in preparation for the opening, operation, and closing of Super Bowl Boulevard this week might affect their deliveries but Sylvester isn’t worried,

“The mayor’s office has been really good at letting us know about road closures, sanitation crews, and waste pick-up so we can prepare. There’s nothing to contrast this event to, so all we can do is be prepared,” she said.

Paul Downey, 33, of Manhattan, manager of McHale’s Bar and Grill on 51st and Broadway, agrees; 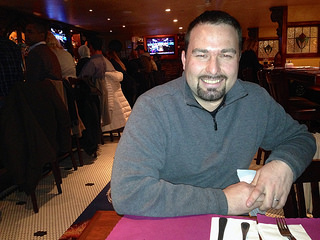 Paul Downey, 33, the manager of McHale’s Bar and Grill is prepared for large crowds this weekend. By Zoe Lake

Downey plans on having extra security on detail but feels good knowing the NYPD will likely ‘have a cop on every corner.’

Downey, and Eric Shon, 34, of New Jersey, who owns Shon 45 Wine and Spirits, also near Times Square, said business has been unusually steady after Christmas and New Years; a time where it traditionally levels off. Shon believes this has left him better prepared for the high demand that is sure to come with Super Bowl weekend. 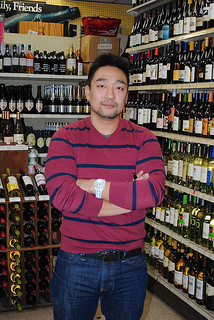 Shon, 34, of Shon 45 Wine and Spirits stands in his shop ready for Super Bowl Business. By Zoe Lake

“We’re pretty well stocked, Christmas and New Years hit us pretty hard so we’ve been trying to compensate for that,” he said.

Shon expects that liquor and wine deliveries, which average at about 5-10 a day for his shop, will increase leading up to the weekend, especially with the influx of fans staying in nearby hotels.

“We’re pretty booked up this whole week,” she said. “Bookings went up as soon as the two teams were announced, but were not oversold.”

Sachdev expects that between last minute bookings, and walk-ins they will likely fill all their rooms this weekend. Many other area hotels are anticipating the same given their proximity to the game itself, which is being held in New Jersey.

As the countdown to the first cold weather Super Bowl in nearly 20 years winds down, New Yorkers don’t have to worry about local businesses getting cold feet,

”We’ll be ready for them,” chuckled Downey. “And hopefully the weather will hold up too.”