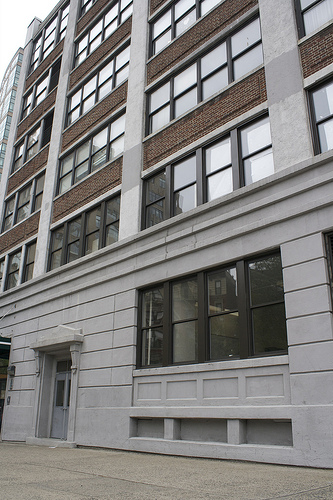 The Broome Street Charter School, which will open its doors at 121 Avenue of the Americas in September 2011, was one of 20 schools to use a pilot online application developed by the New York City Charter Center. Photo by Rachel Ohm.

New York City schools are in the thick of the high school application process this month—but a new online approach to the admissions process might make their workload a little lighter.

The common online application, an admissions system preferred by most universities and colleges for nearly a decade, was used by nearly 3,000 charter school applicants for the first time this year.

The New York City Charter Center, a non-profit organization helping charter schools with advocacy and management, implemented the new system at select schools to get parents and teachers through the stressful and time-consuming application process.

“We’ve had very positive feedback from the schools,” said Sulafa Bashir, Program Manager for School Operations at the New York City Charter Center. “It was interesting because a number of the schools already had their own online application but they were still interested in using this as a channel to get additional applicants and they did receive a lot of additional applications as a result.”

Development of the new system began in December, after the Charter Center offered a pilot application to the first 20 schools that expressed interest.

There are currently 125 charter schools citywide, with another 17 scheduled to open this fall. According to Bashir, 40 schools responded to the Charter Center advertisement within two days.

After an initial round of feedback, the application—which asks for basic information such as a student’s name, address, gender and the academic year they are applying for—was displayed on the schools’ websites.

“It’s a lot like the common application for colleges,” said Bashir. “It’s the same concept except there are no recommendations or essays. It’s much easier.”

In addition to online application submission, many schools retained a printable version that parents could fill out and mail, fax or deliver by hand.

A key part of the application requires that parents note whether an applicant has siblings at the school and what Community School District (CSD) the family lives in—factors that could give their child an inside edge.

The citywide due date for applications was April 1 with lotteries scheduled to take place from April 2 to April 16.

Dan Rubenstein, executive director of Brooklyn Prospect Middle School, a charter school in CSD 15 that places special emphasis on technology, said the online common application has made the admissions process less stressful for both applicants and schools.

“The reason we decided to use the common application was to make it easier for parents to apply to the school,” he said. “It’s also easier to manage a single application as opposed to running around collecting a bunch of different papers; it’s much less work for us.”

Rubenstein said Brooklyn Prospect, which has 220 students in grades six through eight, received 680 applications this year and accepted about 100 new students –an increase he attributes to the common online system.

But he added that although the school is looking to expand, they do not really feel the need to attract a larger applicant pool.

“We have so many more applications than we have spaces available,” he said. “I think there may be other schools that are under-enrolled and I think maybe for them it would be a bigger deal.”

Bashir said a goal of the new online common application is to increase access to charter schools, make parents aware of the educational opportunities they offer, and encourage people to apply.

“The charter landscape has changed over time and it has definitely become more competitive between schools,” said Bashir. “In areas where it has become more saturated; where there are multiple schools in the same area, those schools have definitely seen a decline in their wait lists.”

The Charter Center plans to provide the application in languages other than English and Spanish, which are currently the only options.

“Parents who aren’t comfortable with English have a hard time applying to charter schools because they may not necessarily be able to fill out the application,” Bashir said. “One of the great things about having a common application is once we translate it to multiple languages we can make it much easier for these parents to apply.”