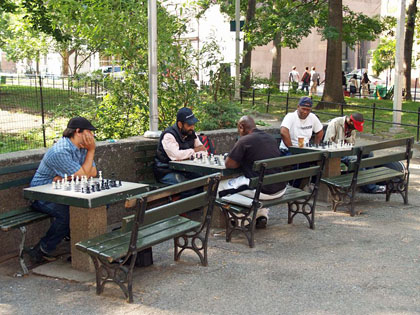 Although the ground was still covered in snow and the temperature was below freezing, Bobby “Sweet Pea” Plummer sat on a bench in Washington Square Park with two felt chess boards set up at the table in front of him. He stayed there for hours calling out to passersby, the few who were out in the freezing weather, trying to persuade them to join him for a quick game.

“It’s hard out here in the winter,” he said. “Plus, the economy’s bad so no one wants to play. In the summer I get thirty, forty, fifty people. These days I’m lucky to get five.”

Hours went by without anyone sitting down to play, but Sweet Pea accepted it as part of the job. After four decades of playing chess for money, barely anything ruffles his feathers.

Sweet Pea fell into the chess profession during the ’60s when he couldn’t find a job. He’d wander around the city’s chess shops, looking for a way to occupy his time. As he tells it, he learned how to play from a wealthy rabbi who would always come by the shops. The rabbi told him about guys making money playing out in Times Square, and Sweet Pea jumped at the opportunity.

“The rabbi used to spread all his money around to the poor guys like me. I thank God for that rabbi. He’s up in heaven now,” Sweet Pea says, looking towards the sky.

Sweet Pea has come a long way since his early days. He’s been quoted in newspapers and magazines, and he has been on TV. He had a cameo in “Searching for Bobby Fischer,” a film about a prodigy chess player. He’s played with Woody Allen, Chris Rock and Anthony Hopkins. Sweet Pea says everything Hopkins knows about chess, he learned from him.

Sweet Pea hasn’t let these brief encounters with fame go to his head. He still plays with anyone who’ll pay and gives lessons to beginners, but he’s tough on the inexperienced opponents who challenge him to a game.

“I play to win, no matter who sits down,” he said. “I probably win about 85 percent of my games. There are some good players out here.”

On this cold February day, a young man finally sat down to play a quick $5 game. Jon Fischer (no relation to Bobby, he confirmed), 24, is certainly not someone who will damage Sweet Pea’s winning record.

“I just learned the other day, so I’m kind of a beginner,” he explained apologetically. “Take it easy on me.”

But Sweet Pea had no intention of taking it easy on anyone. From the first move, he relentlessly taunted his opponent, using variations on the derogatory chess term — “fish” — for players like Fischer.

“We call ‘em fish because beating them is like shooting fish in a barrel,” said Sweet Pea, as if the young man across the table can’t hear. “Honorable fish. C’mon, fishcake. Let’s go, Baby Jon,” Sweet Pea shouted. “I’m going to use my duck variation. You’re a dead duck now.”

Even though he was a little flustered, Fischer played along, taking no offense.

“Well, you’re one of the most modest people I’ve met in a while,” Fischer shot back sarcastically.

As promised, Sweet Pea made quick work of Fischer. He got his third $5 payment of the day, but it only got colder and fewer people walked past. Sweet Pea didn’t seem to mind though — he just likes to play.

“I’m out here surviving, doing what I want to do,” he said. “I love chess. I really love it. It might be tough these days, but things will pick up soon.”

Now Sweet Pea is just waiting for the weather to improve. Until then, he’ll be in Washington Square Park — rain, sleet or snow — waiting to make some real money.

Pavement Pieces » Blog Archive » Chess pro challenges willing opponents was a wonderful read. You really out done yourself! I’m so new to this stuff, you make it so newbie like myself can easly wrap their heads around it, thanks!