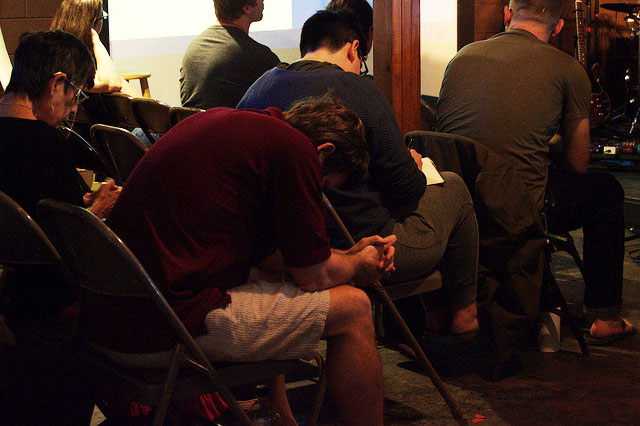 The congregation at Vox Veniae bows their heads to pray during a Sunday service. Photo by Samantha Springer

Some Christians in Austin, Texas are reframing the strict conservative label often associated with a traditionally “red” state located on the Bible Belt.

As the rhetoric of the Republican Party becomes increasingly divisive, they are looking to their faith to help them decide where they fall on the political spectrum.

“I grew up under the guise of thinking that the Republican Party was just right about everything because it took the “Christian stance,” said Naomi Jackson. “But the key question for me has become: what is God doing?”

Jackson attends Vox Veniae, a non-denominational and notably progressive church in Austin, Texas. Like any other church, the ambience of the service was set by dimmed lights, bowed heads, and soulful, heartfelt music, but when it was over, Jackson discussed the way the atmosphere of southern religion is changing with her friend, Gina Bastone. The change is particularly focused around influential religious figures like Jen Hatmaker and Beth Moore.

“These white, suburban, middle-class women, evangelicals, are suddenly realizing ‘Trump does not represent me, he does not represent my values,’” said Bastone. “I think that’s a really interesting, shifting demographic that is not what you see in the mainstream media.” 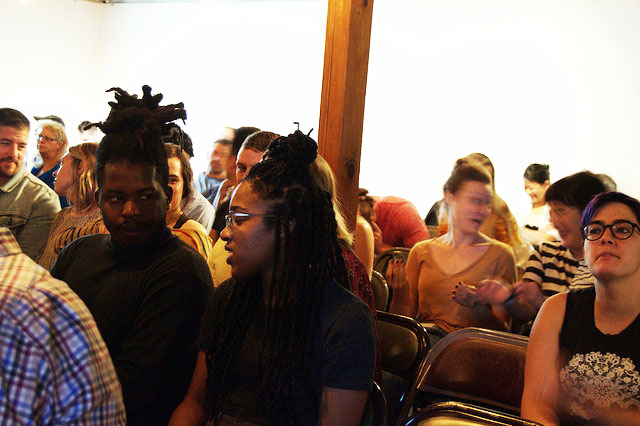 Jason Igkpatt speaks with another member of the congregation during the service at Vox Veniae. Photo by Samantha Springer.

Jason Ikpatt is also a member of the congregation at Vox. For him, the current state of politics in America has made his position abundantly clear and completely absolute. Because he doesn’t want “companies releasing toxins into the air” or for “children detained at the border to have to represent themselves,” he said there is “not much room for nuance to reflect my actual opinion.”

“For me, because things have become so binary in the political sphere, there is really only one option,” said Ikpatt.

Not all southern Christians have always had a liberal inclination, and some still struggle with issues that conflict with their beliefs. Roxanne Van Brown grew up Baptist and attended a Baptist church for almost her entire adult life. She considers herself a radical prayer warrior and has been a staunch Republican for many years, but a paralyzing fear for the future has swayed her political affiliation.

“He is a bully [Trump].” said Van Brown. “He is putting our lives, our national security, in danger, and I can’t support that.”

Van Brown is a member of a Facebook group named “Christians for Beto.” Though she vehemently opposes abortion, gay marriage, and the legalization of marijuana, she will no longer vote Republican.

“For me, the breaking point was when that shooting [Parkland] happened down in Florida.” said Van Brown. “I’m going to vote the way those kids tell me to vote.”

Jillian Myles works for a Texas state Senator. She also finds herself torn when it comes to the issues she cares about, specifically abortion and immigration.

“I have some non-citizen friends,” said Myles. “I care about their well-being, and their status, and their path to citizenship. But on the line of abortion, I have always cared about the unborn, because scripture says God knits us together in our mother’s womb.”

She had not decided who she was voting for yet, but her obligation to her faith plays a bigger role in the way she votes than her occupation does.

“Honestly,” said Myles, “I have just been praying a lot, and trying to look at the big picture… what candidates care about, what they are pushing and hoping for, in line with what scripture says.”

Like Jackson, she is looking to where she sees God and to what will advance his kingdom.

“And that is hard,” she said. “Because I think that both sides of the aisle have good ideas for doing that, so it’s hard to say that one party is going to accomplish it.”