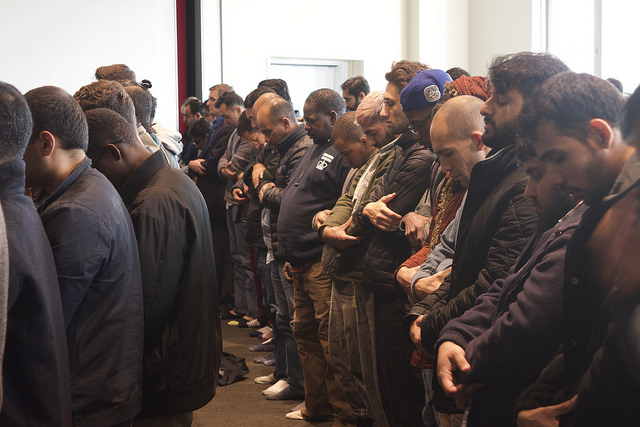 Muslim men attending the prayer service at the Islamic Center of New York all stand in union hoping that the message of the speaker leads them in their daily lives. Photo by Levar Alonzo.

More Muslim candidates than ever before are running for public office. Last time there was this many was after 9/11.

“We are all one people, white, black, Muslim or Christian doesn’t matter,” said Shahab Mohammad, a pharmacist in Jackson Heights, Queens. “Yes, I am a Muslim and people hate me for being that, but I am so much more.”

President Trump’s time in office has seen him push for a travel ban aimed primarily at Muslim countries. His rhetoric has ushered in a swell of Islamophobia not seen since the 9/11 attacks. In response to Trump’s tactics to ostracize Islam and the Muslim community, Muslim candidates have come out in force, though heavy underdogs in some races, to run for public office.

Members of the Muslim community said they happy to have the representation of people that look like them in government and just want to be included in the American society.

Mohammad wants people all across the country to know that he is not a terror to his community because of his religion. He came to the US from Bangladesh in 1977 and has since worked and opened up his own pharmacy. He has given jobs to people in his Jackson Heights community.

“After 9/11, although I’m a pharmacist some people call me a terrorist. They called me this a few times,” said Mohammad. “I’ve been serving this community almost 25 years. The Bangladesh government paid for my education, but I have lived and work in this country, trying to make people live comfortable.” 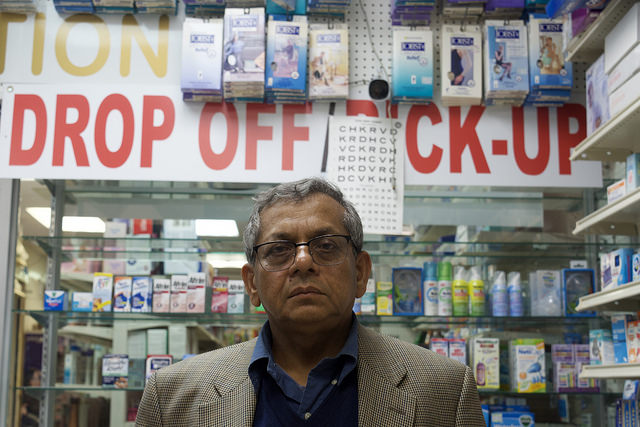 Shahab Mohammad has owned his pharmacy for the past 25 years in Jackson Heights and wants to be look at as a hard working American instead of a terrorist. Photo by Levar Alonzo

According to a 2017 data research done by the Pew Research Center,  despite the concerns and perceived challenges Muslims faced, 89% of them said they are both proud to be American and proud to be Muslim.

“America is the land of the free and home of the brave, it is where everyone comes to live together and just be one,” said Abdul Raquq, the janitor at the Masjid AL Tawfiq.

The research also said that eight-in-ten Muslims said they are satisfied with the way things are going in their lives. And a large majority of U.S. Muslims continue to profess faith in the American dream, with 70% saying that most people who want to get ahead can make it in America if they are willing to work hard.

“This is a country where despite what might be going on in the political world, you can make something of yourself,” said Raquq. “ The American dream is real, forget Trump, he can say what he wants but he not stopping a Muslim. Hard work can get you anything you want.”

Energized by the anti-Muslim rhetoric of Trump and his supporters, as many as 90 Muslims have run for national or statewide offices in this election cycle.

The rise of the first two Muslim women, Ilhan Omar, and Rashida Tlaib, poised to be elected to the US House of Congress is a direct outcry for Muslim representation in government.

“It means a lot to me, but I think more importantly to the Muslim generation growing up to see these women in positions of power,” said Sara El Shrief, 31, a talent acquisitions manager. “I feel like America has evolved over the years and it’s not unusual to see someone with a headscarf in advert.”

Rashida Tlaib is running in Michigan’s 13th Congressional District spanning parts of the Detroit and its suburban area. Her race to replace former Democratic representative John Conyers is guaranteed as she is running unopposed.

According to ABC News Tlaib said that she is running to make sure her sons stay true to their Islamic identity.

“I didn’t run because my election would be historic,” she said. “I ran because of injustices and because of my boys, who are questioning their identity and whether they belong.”

Ilhan Omar is running in Minnesota’s fifth congressional district, a seat that was previously held by Keith Ellison, the first Muslim man in Congress.

Two years ago the Minnesota Democrat became the first Somali-American elected to a state legislature. Now she’s likely to be one of two Muslim women elected to Congress.

“Growing up, we barely had any Muslim representation whether in office or in the media,” said El Sherif. “Whenever any of us see that happen we’re super excited and it makes us feel like we’re as American as everyone else instead of feeling like outsiders in our own country.”

Resident scholar at New York University, Shiek Suhaib Webb, said that Muslims are not foolish to how power in America works. He has seen that more and more Muslims are feeling empowered to go out and change their neighborhoods. This change is not just for Muslims only, but for the greater community. He said Trump’s rhetoric of hate and fear does not phase them.

“We fear nothing but Allah,” he said. “We are not a community that believes in complaining. We believe in changing things. Muslims are getting busy.” 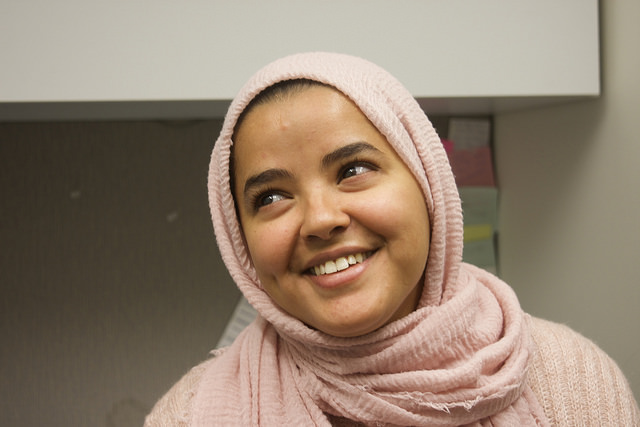 Aziz Giroud who works in outreach at the Islamic Center of New York University moved to America from Libya three years ago wants to see more Muslim representation in government. Photo by Levar Alonzo.

With just a few days left before the final votes are tallied Aziz Giroud wants Muslims to continue the trend of fighting for public office and seeking representation.

“For too long we have felt like our voices weren’t important,” she said. “But if you start the habit of speaking up like we are now then it would pass down to other generations to start a real change in the way this country thinks of us.”