City relies on residents to carry out smoking ban 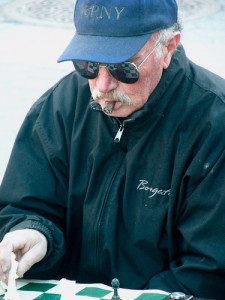 A smoker in Union Square in lower Manhattan savors the last bit of his cigar while playing chess. New York City will call on residents to enforce the new smoking ban in parks and public plazas. Photo by Frank Riolo.

Enforcing the new citywide smoking ban in New York City parks, public plazas and beaches might depend on resident watchdogs.

Mayor Bloomberg recently announced the New York Police Department will rely on citizens to keep tabs on wayward smokers. Although residents cannot go as far as handing out $50 fines to those lighting up in restricted areas, some smokers say a law that depends on citizen enforcement could backfire.

“You’re going to have the potential to create a lot of volatile situations amongst people in the city,” said Nile McMahon, originally from Dublin, Ireland, an after-lunch cigarette protruding from his mouth. “I’m going to have people coming up to me and saying ‘You’ve got to put that out’ and I’m going to say ‘No!’ I mean, I’m normally not an aggressive person.”

“I know from personal experience that NYPD officers are not about to spend precious time chasing down those ‘criminal’ smokers; I have no doubt that fellow law enforcement officers will share the same sentiment,” she said, referring to the Parks Enforcement Patrol, the entity granted official authority to hand out the $50 fines. New York City Council estimates there will be about 475 officers on park patrol this summer, which Silk said is not nearly enough to enforce the ban.

Listen to what smokers say about residents enforcing the ban:
Altarv1.mp3

Yet Upper West Side Councilwoman Gale Brewer, the bill’s primary sponsor, said she has faith in citizens to keep tabs on one another. Brewer believes the ban will reduce confrontation now that smoking opponents can point to the law.

Brewer compared the smoking ban to the restricted use of cell phones in movie theaters, which she says some believed would be ineffective when first introduced.

“Now people know that it’s the law and they turn their cell phones off,” she said. “I’ve never seen a cop in a movie theater.”

“It just becomes a huge social problem,” Ng said while smoking on a bench in Union Square Park in Lower Manhattan. “People will see themselves as more superior because they have the power (to cite the law). And it also tags people who smoke as inferior or criminals rather than just as an ordinary citizen.”

Despite the plan for citizen enforcement of the law, many smokers say they’re not intimidated by the ban.

“I’m a smoker,” Zack Freilich of Manhattan’s Lower East Village said almost with a sense of pride. “I am going to smoke wherever I want.”