Crowds are thin, but hopes high at Feast of San Gennaro 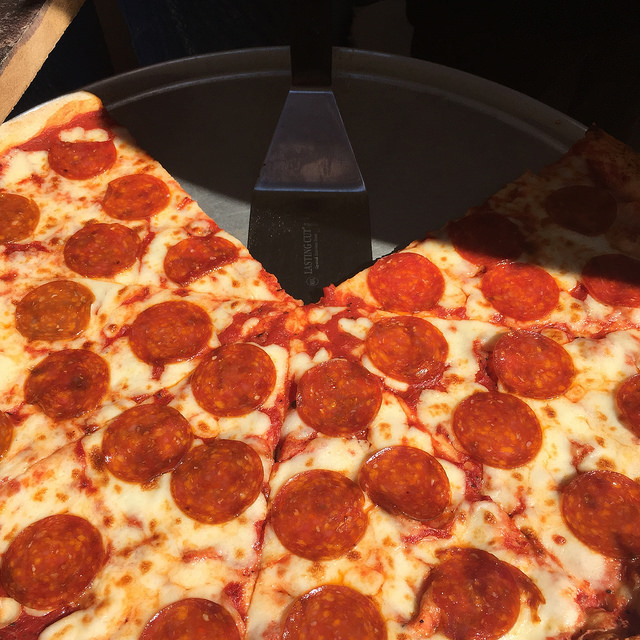 Homemade pizza is one of the staples The Mulberry Street Bar offers during the Feast of San Gennaro. Photo by Leann Garofolo

The red, white and green clad streets of Little Italy yesterday afternoon were empty. Hundreds of vendor tents lined the walkways, selling everything from pizza and cannolis to Italian flags and clothing, But customers were scarce.

Despite crowds being thin, expectations among the vendors were up with over a million visitors expected during the 89th year of the Feast of San Gennaro.

The annual feast is meant to keep the spirit and faith of the Italian immigrants alive, and to pay tribute to the patron saint of Naples, San Gennaro. Thousands of Italians emigrated from Naples, Italy, to the lower Manhattan neighborhood of Little Italy over a century ago in search of a better life. But the descendants of the immigrants have long moved to Brooklyn, Staten Island and beyond. Only a few Italian stores and restaurants which stand as reminders of the bustling Italian neighborhood it once was

Vendor Rose Lansang, of Bayonne, NJ said she knew why business was slow. The feast started right after Labor Day and had other holidays stacked behind it.

“[The visitors] just came back from their holiday, then the Jewish holiday was approaching, so you know, their minds were set on school opening, not on the feast,” she said.

Lansang and her daughter, Dorothy Lansang, are the owners of Street Fair Cosmetics based in New Jersey. They have had a stand in the festival for over 25 years.

The duo’s beauty stand on the corner of Mott and Hester Street sold discounted cosmetics, including body lotions, bath products, makeup kits, and hundreds of nail polish colors just waiting to be bought.

Liza Nagelkirk, 26, of Williamsburg, Brooklyn, was hoping to see bigger crowds.
This was her first year working the festival as the event manager of Gelso & Grand restaurant, and her spot was at the wooden high-top window bar serving food and alcohol to passersby. 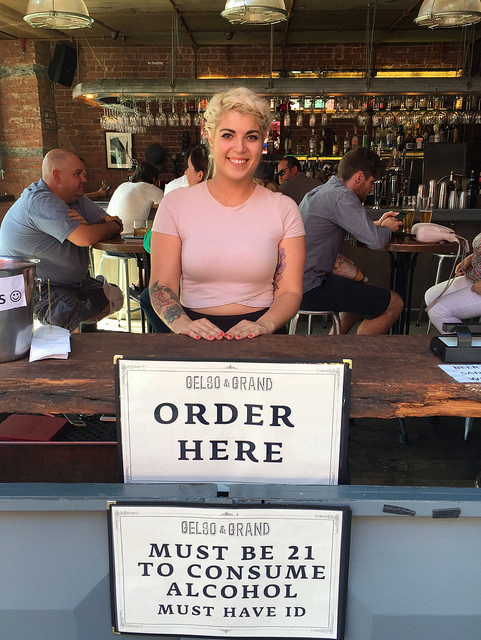 Liza Nagelkirk, the manager of Gelso & Grand, awaits the influx of customers the sunny weekend weather is predicted to bring. Photo by Leann Garofolo

“We started off with it being rainy, and so that was difficult for people,” Nagelkirk said of the thin crowds. “I think a lot of people put it off because they knew this weekend coming up was going to be nice, and they’re like, we’ll just go. I think it’s going to be swamped this weekend”

Fabrizio Facchetti, 21, an Italian immigrant who lives in the Bronx, worked out
of a makeshift café stand in front of the Christmas in New York Store, which also happened to be his second job. He compared scooping gelato and preparing cappuccino to his days as a pastry chef in Milan. He was hopeful the crowds would come.

“Everybody, maybe they are working,” Facchetti said. “Most of [the customers right now] are tourists from all parts of the world, like Italy, Asia, South America. But tonight is going to be busy, trust me.”

Camille Welsh, of Naples, Italy, has assisted her family in working at the stand for their restaurant, the Mulberry Street Bar, for 72 years. Welsh grew so accustomed to Little Italy that she moved to Mulberry Street to live permanently, just a short distance from her family bar, which also boasted Thursday karaoke nights and weekly comedy shows.

Welsh’s familiarity with the festival helps her understand the occasional lull in business.

“Now it’s the middle of the day,” she said. “People are still at work, lunch time is really over, dinner didn’t start yet. It comes in spurts.”

A few idle visitors walked by to check out the various homemade pizzas lining the picnic table style stand for the family’s bar. They walked away empty-handed.

“You never know how crowded it is going to be,” she continued. “So, it’s like anything else. It’s like the weather. You don’t know if the sun is going to come or the rain. So, whatever happens, happens.”

[…] Crowds are thin, but hopes are high at Feast of San Gennaro […]