Designer aims for success beyond NYC 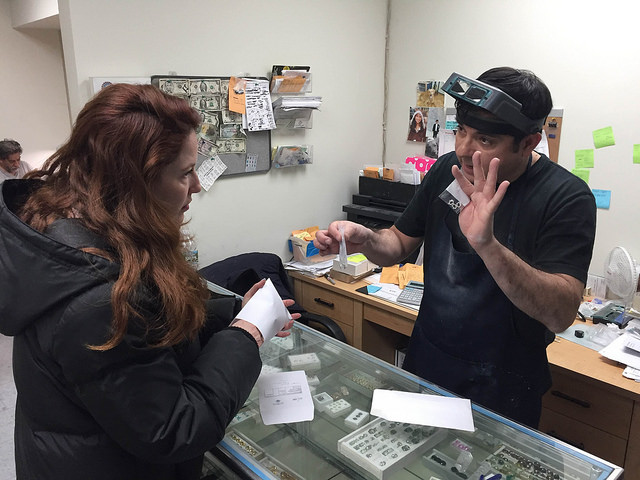 Julie Lamb arranges a supply order with one of stone sources in NYC’s diamond district. Photo by Eugene Y. Santos

It was a rainy Monday morning in New York City, and Julie Lamb was on a roll, hopping from one appointment to another in midtown Manhattan’s diamond district, meeting jewelry setters and stone suppliers for her eponymous accessories line. For her, bad weather can stop her business.

Not at that time, or any day in the near future. Not now when finally, she is building a name for herself in New York City, and hopefully, the rest of the world, too.

And she’s not alone.

For many designers, New York City is seen as a boot camp for a career in fashion. While it’s competitive and expensive, designers like Lamb opted to professionally stay in the city for two main benefits: connections (fashion retailers and press) and accessibility (the suppliers and labor that can be utilized and outsourced in the garment and diamond districts).

“I like the fact that everything’s within reach in the city,” said Lamb. “It’s nice that I can just walk into someone’s shop and personally keep track on how my products are made.”

It’s been two years since Lamb ventured into entrepreneurship. A decade ago, her younger self would have balked at the idea of being a businesswoman, considering math isn’t her best suit. She was a creative, and she appreciated the corporate stability offered by employers like Nine West jewelry and Avon.

“After many years of working though, it came to a point where I just didn’t want to report to a boss,” she said. “I talked to my brother about it and he said that the only way I can work for myself was if I started my own accessories line.”

In 2014, Lamb launched her own jewelry brand, consisting of a lineup of accessories made with gold, silver, and diamonds, with a cutesy sheep pendant or engraving as a signature.

For Lamb’s friend Kia Felty, the designer’s strength lies in her fun approach to fine jewelry.

“There is a desire for fun, fine jewelry that can be worn everyday and are well-crafted enough to be passed on to the next generation,” said Felty. “Julie’s brand is headed into that positive direction.”

The brand has been warmly received by both jewelry insiders and press, although for Lamb, it’s just one facet of what makes a success story in New York City.

In an ephemeral industry like fashion, Lamb learned that designers should keep an open mind—and a keen foresight—in the city that never sleeps.

“I don’t have a business degree so I can say that experience is the best teacher,” said Lamb, who is now active in the Women’s Jewelry Association (WJA), an organization that helps jewelry designers develop their business savvy through networking events, learning workshops, among others. “There’s so much going on in this industry that I just talk to and learn from everyone.”

It also helps to be alert in social media. In Lamb’s case, you never know who is going to come around to even expand your horizons outside New York City.

To be exact, Lamb has been virtually acquainted with  jeweler Andrea Riso, one of the retail brains behind Talisman Collection, a gallery concept store based in El Dorado Hills, CA.

After a year of liking and casually leaving comments on each other’s posts on social media, Lamb sent Riso a formal message about what her jewelry line is about. Riso then reverted back, saying that she’s interested to work out a deal with Lamb.

“She also sent me a list of people I can talk to,” said Lamb. “It feels very nice, as right now, I’m in the process of contacting different retailers to get my jewelry out into various selling points outside New York City. It’s a matter of slowly getting my name out there more.”