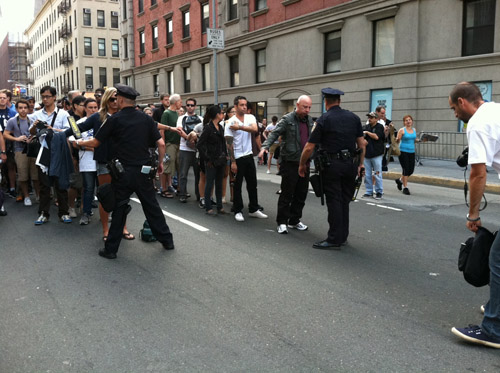 Each ground zero visitor was scanned by metal detector wands before they could enter the public viewing section. (photo by Edna Ishayik)

Ten years ago, the shocked and wounded ran from the World Trade Center, hands to mouth, covered in dust. Today, despite new threats of attack, thousands streamed to where the towers once stood to commemorate the lives of those killed there in 2001.

Earlier this week, the Obama Administration announced reports of “specific and credible but uncorroborated intelligence” of a possible anniversary attack on Washington D.C. or New York. Citizens of those cities were told to go about their business as usual, but to be on the alert for suspicious activity. Police patrols beefed up their numbers by the thousands. No incidents were reported.

The threats did not come as a surprise to many considering the triplicate of new elements involved in this year’s ceremony: the symbolic tenth anniversary, Osama bin Laden’s capture and the completion of the 9/11 memorial.

“They want us not to celebrate, but I think it did the opposite,” she said while watching family members of the victims of the attacks read aloud the names of the fallen. She was dressed in the colors of the American flag. 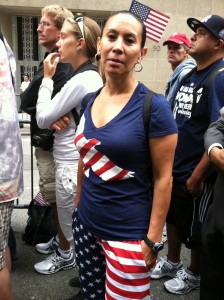 Martha Rincon of Forest Hills, Queens, shows her patriotism. She would not let terror threats keep her from the memorial service.

Rincon was not worried. She said the new threats compelled her to come to ground zero as an act of defiance.

The crowds, aiming for a closer view of the ceremony, were channeled through police chutes, the streets lined with metal barricades to control the flow of people at each block. Police mingled among the groups, checking bags and asking questions. Above Warren Street, each visitor was stopped and metal detector wands were waved over their bodies.

President Barack Obama, his predecessor, George W. Bush and other current and former elected officials read quotes from poems and literary works. When Paul Simon delivered a spare rendition of his song, “Sound of Silence,” tears streamed from people’s faces. 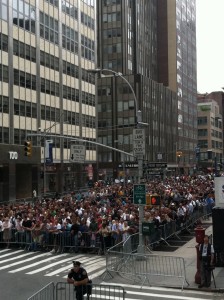 Thousands streamed into lower Manhattan despite, and in some cases, in defiance of renewed threats of attack. (photo by Edna Ishayik)

Subways had a greater police presence. Though security checkpoints were set up along the bridges and roads leading into Manhattan, Doug Reinbeckel, 51, of Media, Pa. made it into the city in record time. He didn’t think twice about the renewed threats of terror in planning his trip to pay tribute to their service and sacrifice.

A decade ago he woke up to news of the attacks. Later he would learn 10 friends, New York City fire fighters, perished in the World Trade Center.

“They died in those towers saving lives,” he said.

David Canner, 40, of Middle Village, Queens, who also attended the memorial service, remembered the smell of the air that wafted outside his house for months after the 2001 attack.

“It was a brownish haze, you could see it to the south,” he said. “It smelled like burned metal.”

On September 11th of that year his brother, FDNY Captain Billy Canner of Ladder 164 was dispatched to the site. It wasn’t until that evening that David got word of his brother’s safety.

Despite vivid memories of that day, Canner said he’s not fearful of a reprise attack.

“New York is the safest place in the world,” he said.