Disabled pet owners won’t give up on beloved “family” members

Kobe is an 11-year-old Shiba Inu who about two years ago developed glaucoma, gradually causing him to go blind. It was a serious condition and eventually his medications stopped working, leaving him in pain. He recently had surgery that removed parts of his eyes that are now stitched shut. He is completely reliant on the love and guidance of his family.

His owners were left with the choice to either pay for the surgery or eventually have him put down. Rather than give up on Kobe, they paid over $2,000 to save him.

Some pet owners, like Kobe’s, will do whatever it takes to keep their beloved animals alive. They will spare no expense or inconvenience. To them, their pet is a treasured member of the family, no matter their condition.

Judy Kule, 52, from Wantagh, LI, and her family are dog lovers who have gone to great lengths to care for their disabled dogs, including Kobe, and Zeus, their previous dog. Zeus developed cancer when he was four years old and had a leg amputated.

“They’re like our children and we’re just going to do what we would do for any one of our children,” Kule said.

For many, the costs of surgery can be a deal breaker when deciding whether or not to provide the utmost care for sick pets.

Over the past 12 years, the Kules have spent over $8,000 in medications and surgeries for their pets and spent countless hours caring for them as they battled illnesses.

The most difficult aspect isn’t the costs, but how people look at their pets as if they’ve been mutilated, Kule said.

“The hardest thing about having disabled dogs, whether it be a blind dog or a dog with three legs, its actually not taking care of them, its other peoples reactions,” she said. 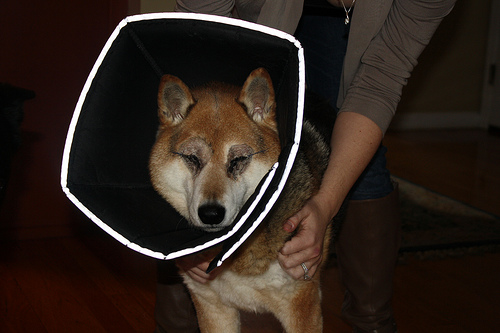 Kobe, 11, is a Shiba Inu recovering from eye surgery that will relieve the pain he's been experiencing due to his glaucoma. Photo by Nicole Guzzardi

People look at disabled dogs and feel sorry for them or don’t understand the point of keeping them, she said.

“The dogs are like our children,” Kule said. “We wouldn’t send our child to a home because they turned blind.”

Besides being completely blind now, Kobe will lead a normal, healthy life. In fact, once he recovers from the surgery, he will be in far less pain and should return to being a playful dog, she said.

“He still has a lot of life in him,” Kule said.

Mallory Kerley, 25, the Kules’ daughter, is the media coordinator at the American Society for the Prevention of Cruelty to Animals (ASPCA).

Kerley said that despite common misconceptions about disabled pets, they actually get adopted rather quickly through ASPCA’s New York City adoption center.

“It depends on the type of disability, but if there’s a dog that comes to our shelter with three legs, or say it’s missing an eye, they actually get a lot more sympathy from potential adopters,” she said.

The Kule family’s first experience caring for a disabled pet was when their dog Zeus, a greyhound mix, developed cancer in his leg in 2000.

Kerley said as soon as the vet said the surgery might save his life, they knew it was the way to go.

The family decided to have Zeus’ cancer-ridden leg amputated in hopes to prolong his life.

While he recovered, Kule would bundle up with blankets and sleep with Zeus on the kitchen floor, because he couldn’t make it up and down stairs, she said.

Despite the surgery, Zeus died about four months later because the cancer had already spread, Kerley said.

“We did it to save his life, even though it didn’t work,” Kule said.

With Zeus, even the best medical care could not save his life. It is cases like this that petMD.com veterinarian Jennifer Coates sees all the time.

Coates, 41, of Fort Collins, Colo., specializes in end-of life care, like hospice and home euthanasia for animals, she said.

Coates said some people spend tens of thousands of dollars to treat their pets’ life-threatening illnesses, while others might only spend a few hundred, depending on their financial situation and their view about an animal’s role in the society.

“When there is little chance for a pet to have good quality of life no matter who is responsible for its health care, I recommend euthanasia, but if it is a matter of finances only, I try to help the client find a new home for their pet,” she said.

In her practice, the doctors never put down an animal simply due to lack of financial funds, she said.

When asked why many people go to great lengths exhausting time and money, she replied frankly.

“The answer is simple – for love. For many people, pets are family,” she said.

Christy Stewart, 38, from Cocoa, Fla, and her family are proud owners of a deaf Boxer named Pearl. 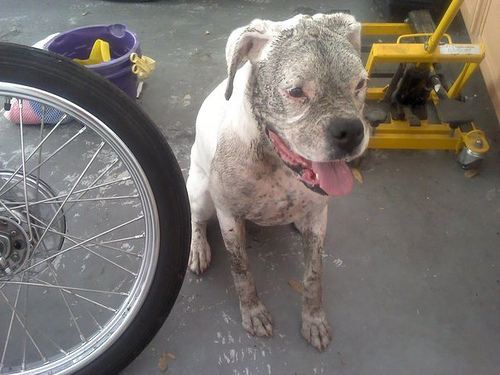 Pearl, age 4, has been completely deaf since birth, but has a loving owner, Christy Stewart, and family who take great care to make sure she lives a healthy, happy life. Photo by Christy Stewart

Pearl is white, which is rare in Boxers, and has been deaf since birth, Stewart said.

“She was born deaf, and so [the breeder] couldn’t sell her, so they were either going to put her down or send her to a rescue, so we decided we would take care,” she said.

Stewart said she did worry that it might not work out because people told her that it can be difficult to connect with a deaf dog, that they don’t always bond well with people.

The family raised Pearl since puppyhood and kept her around children constantly in hopes that she would be comfortable with them, she said.

“It just evolved and now she’s a wonderful family dog ,” Stewart said. “When the children scream and run around her, it’s almost a good thing. She doesn’t hear it, she doesn’t get crazy excited.”

The hardest part of owning a deaf dog is disciplining, because they cannot hear your commands, so Stewart has come up with gestures to compensate, she said.

“We use a lot of hand signals, but she’s a smart dog, so if she doesn’t want to listen she just won’t make eye contact,” she said.

For both the Stewarts and Kules, raising a dog with special needs isn’t at all a chore.

“We would do anything for any of our pets, to keep them healthy, to keep them pain free, to make them just happy dogs,” Kule said.

[…] Disabled-Pet Owners Won’t Give up On their Furry Family Members Share this:FacebookTwitterMoreEmailLike this:LikeBe the first to like this post. Posted in Features | Tagged aspca, disabled, dogs, petMD, pets, puppy love […]