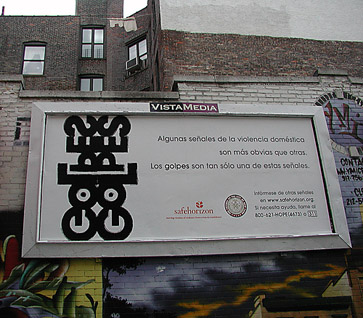 She works as a legal advocate and counselor at My Sister’s Place in White Plains, N.Y., a nonprofit that provides assistance, shelter and counseling to victims of domestic abuse. She meets daily with battered mothers who are afraid to move forward and terrified to look back. She offers them what others cannot — the encouragement of a woman who was broken once, too.

For eight years, Roman lived with her abusive boyfriend, an obsessive cocaine addict who was jealous and controlling from the start of their relationship, refusing to let her talk to other men, and threatening to kill her if she did. At the time, Roman lived in Newark, N.J., working two jobs to support her four children and her boyfriend’s drug habit.

“The way I would deal with it was when I got paid, just to get him out of the house and my hair and to leave me and the kids alone, I would give him all of my money,” Roman said. “He would get high, and it would make him paranoid, and he would accuse me of these terrible things. If I was one minute late coming home, he was waiting for me at the bus stop, screaming in the middle of the street, ‘Who the hell were you sleeping with?’ ”

Roman said she rarely fought back, despite almost daily physical and sexual assaults. He was bigger than she was, and she felt powerless to stop him.

“I didn’t want to make a scene in front of the kids,” she said. “Finally, one day I just started kicking and screaming because I knew as soon as he dragged me into the bedroom he would make me do things I didn’t want to do. It was like being raped every other day.”

Roman’s terror is a daily reality for many. According to the U.S. Department of Justice, one in four women will experience domestic violence in her lifetime. Most cases go unreported.

Roman said most of the women she works with at My Sister’s Place are hesitant to leave violent relationships. Many are too ashamed to admit to being abused. Others are simply afraid of what their partners might do next. Some are still in love.

Roman said the breaking point for her came when her boyfriend tried to molest her handicapped 11-year-old daughter.

“I really felt ashamed and filthy. I blamed myself for what almost happened to my daughter,” Roman said. “It was extremely hard for me to come to terms with that. I was a mother. You’re supposed to protect your children, and you should know better.”

Roman packed up and left, relocating three different times. Her boyfriend found her anyway. With no place left to go, she turned to My Sister’s Place. She hasn’t looked back.

Pichardo said Safe Horizon can house 550 people in its shelters at a time. Almost all shelters are currently at capacity.

Annemarie Vasquez directs a Safe Horizon emergency shelter in Brooklyn. All 45 of her beds are full. Vasquez’s residents, who come from a variety of backgrounds, live in apartment-like “dwellings” while they receive physical and mental crisis care, including counseling and group therapy. She refuses to call them victims.

“I call them survivors,” Vasquez said. “Survivors blame themselves. They say, ‘Why didn’t I leave sooner?’ We offer support groups for them to share their experiences and support the encouragement of other women. It’s very, very powerful. There’s a lot of healing that can happen there.”

Roman agrees. Today, she lives a quiet life in Orange County, N.Y., spending time with her children and walking her dog in the park. In 2004, her abuser was charged with two counts of child endangerment. Roman has an order of protection out against him.

She said the pain that lingers is haunting, but also empowering.

“When I can educate somebody and help them and see how their life is changing, that is healing for me,” Roman said. “When a woman gives you that hug at the end of a session and says, ‘Thank you,’ to me that’s totally healing. I heal Monday through Friday, every day.”

This article really hits home for me. Thank you for making me feel like I’m not alone.

I feel so badly for all the victims. Just remember, you don’t need to suffer, you aren’t alone.

Thank you so much for this story. It brought tears to my eyes.