Tynisha Wilcox marched outside the McDonald’s on the corner of Lexington Avenue and 125th street in Harlem carrying a picket sign. On the other side of the glass, her co-workers looked on.

The 22-year-old Harlemite and hundreds of other fast food workers and their supporters gathered under the golden arches Thursday to speak out against minimum wages. The rally was the culmination of a day of strikes across the five boroughs of New York City as fast food workers rallied for a union, $15 an hour, and better job security.

“We’re being overworked and underpaid,” said Wilcox, “It has to stop. It has to end.”

Wilcox has worked at McDonald’s for seven months and said she noticed an imbalance between workload and pay very early on; jobs that may require five people are left to only two or three.

“Not only are you doing your job, you’re doing the work of many other people and still not being able to support your transportation to get to work to do everybody else’s job,” said Wilcox. 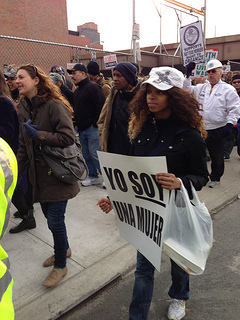 Tynisha Wilcox, 22, of Harlem marches to her workplace to protest for higher wages. Tynisha works at a McDonald’s at 125th Street and Lexington Avenue, where she makes $7.50 an hour. A full-time employee, says she often has to resort to other resources, such as government aid, to survive each month.
Photo by Breana Jones

The average fast food worker in New York City makes about $17,000 a year, according to the New York State Department of Labor, putting them well below the poverty level of $23,000 for a family of four.

The 400 strikers walked out on the same day Martin Luther King Jr. was assassinated 45 years ago. Dr. King was in Memphis to support a sanitation workers strike when he was murdered. New York City Comptroller John Liu told the strikers that Dr. King would be proud of their fight for fair wages.

“I’ve done studies in my office about how we need a real minimum wage,” said Liu, “My office has concluded that $11.50 should be the minimum wage.”

Last month New York state lawmakers decided to raise the minimum wage to $9 an hour by 2016. But Wilcox said it’s not enough.

“That’s a start, but it’s not the answer,” she said while marching down Lexington Avenue. “There’s no way I can support a lifestyle. Especially living in the city when you have rent that is higher than what I would make in three months.”

Comptroller Liu agreed that a $9 an hour pay rate in New York City does not go far.

“… gets you a lot more in Buffalo and Binghamton than it does it the Bronx or Brooklyn,” he said.
New York City Public Advocate and mayoral candidate Bill De Blasio was on sight to give strikers his support, likening their fight to that of the Great Depression era.

“This is our generation’s crisis and people all over this city are waking up to just how unfair things have gotten,” he said.

Strikers were encouraged to go back to work the next day without fear. Wilcox expressed she was afraid her managers would be angry with her, but she was left with no choice.

“It’s like being pushed into a corner and there are no more corners to push you into,” she said, holding a sign that read ‘I am Woman’, reminiscent of the Memphis sanitation strikers who fought the fair wages fight so long ago. “You either fight back or you fall beneath.”