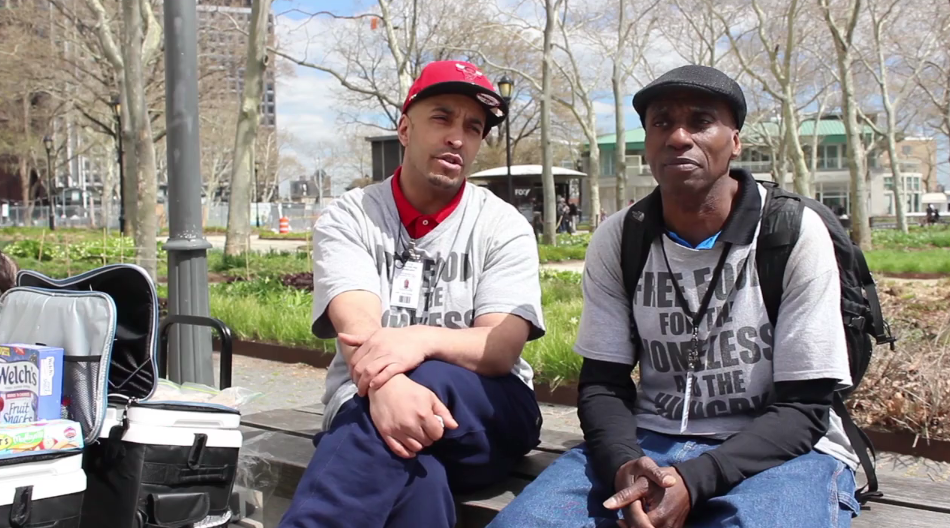 On a recent downtown R train subway ride, the train pulled into the station, the doors opened and then riders heard two men speaking in unison: “Ladies and gentlemen, sorry for the interruption. Is there anyone on this train who is hungry, especially children?”

Just like that – free food is given to the homeless and hungry as stated on their gray T-shirts. Five men push three carts with sandwiches, granola bars, fruit and juices and gave them to anyone who asked.

“You don’t have to be homeless to be hungry,” said Rolando “Divine” Farrow, the founder of Food For The Homeless, whose mission is to feed as many hungry New Yorkers as he can.

Three years ago he was hungry and homeless himself. A stranger on a subway gave him a sandwich. This simple gesture led him on a path of wanting to help others in similar life situations.

Divine is on a public assistance program and lives in the Bronx. Donations on the subway and on the streets are the only sources of money for his mission. He does not travel alone. His colleague from Staten Island Henry Thomas, 38, and others help him feed hungry New Yorkers every day. Thomas lived in a shelter for seven years before he met Divine two years ago. Now they feed nearly 200 people every day.

“We have people who depend on us. They look for us to come by,” said Thomas.

Early in the morning, six days a week, they prepare sandwiches, fill each of three cooler carts with nearly $100 worth of supplies and start to make their way through the subway web.

“The main thing we are trying to do is to give nutritious food,” said Divine.

Along with fresh sandwiches they share information about shelters, where to get a free hot meal and free clothing.

“I believe that one person can make a difference in the world and everyone should at least try,” said Thomas.

This is an excellent organization and what they’re doing is a wonderful thing. Many people on the streets of New York are homeless but I like the fact that the organization was started by a homeless man himself, that shows a little act of kindness creates a domino effect. They reach out to people who are hungry or in need of food you don’t even have to be homeless and they provide you with food. Can you please contact me back the organizers email address I would love to interview them for my school’s newspaper.

This is awesome! I have seen these people in action on the train and they are kind and caring individuals. I like that they go out into the trenches and actually do the legwork of reaching out and connecting with NYC’s most vulnerable. It is heartwarming and reassuring to witness such humanity these days. This organization is a real reminder that there are still good people out here that care and help others.

I think this is amazing! As a high school student, I think more of us should know what struggles people go through and I would love to get involved.

Concert is great but if you don’t have change and you are verbally abused
Speech starts out genuine even A few God Bless You and smile it’s ok after they finish speech and you don’t give or ignore because you had rough day the God Bless You turns into snarky comments. That’s why I donate directly to shelters you don’t insult people because they don’t have money in their pocket.

Don’t verbally insult people if they don’t have money!!!!!!! Give to charity at least you know it goes to people in need

On January 15th 2020 a group of men boarded the E train. They were not dancing. The 3 men begin Telling everyone that they have foods for anyone especially the children. They go on to say that they take donations eben smiles. It really made my day
Thanks Guys for doing an excellent job. God bless you all