Free hearing aids given out in the Bronx 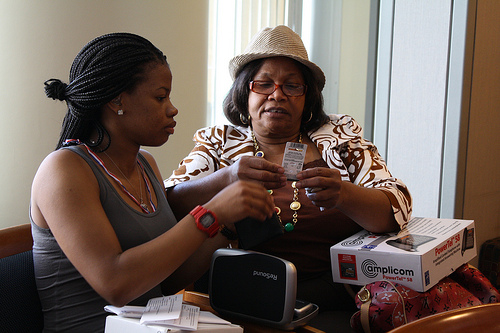 The Foundation for Sight and Sound’s “Help America Hear” program teamed up with the Montefiore Medical Center in the Bronx yesterday, to give 18 low-income patients the gift of unimpaired sound.

Mitch Shapiro, 60, of Long Island who is the program’s co-founder, believes that research in important, but the free hearing aids offer an end to the unique isolation that only the hearing impaired understand

“Services provide an immediate solution to the issue at hand at the moment,” he said.

Shapiro has Usher syndrome, a genetic disorder characterized by loss of sight and hearing that affects about 4 in 100,000 people in the United States. He wears two hearing aids and is accompanied by a seeing-eye dog.

Milina Cuffy, 19, a student at the Rochester Institute of Technology received hearing aids during the event. She was diagnosed with a hearing impairment in the 1st grade.

She spent the last two years without hearing aids because they cost $2000.

“We couldn’t afford it,” she said. “Our insurance didn’t cover it. It was just like whatever, I’ll go everyday without hearing. But, now that I actually have them I can sit in the back of class and hear everything.”

Medicare does not cover the cost of hearing aids.

Cuffy vividly remembers a time when school was difficult because of her impairment.

“I was held back for it because nobody knew I had a disability,” she said.

But the academic challenge was not her only problem.

“I always got picked on in school for it,” she said. I thought I was the only one.”

After the free hearing aids were placed in her ear, Cuffy, could hear everything.

“They were taking pictures when I got them on and I actually heard the clicking of the camera,” she said.” I don’t remember the last time I heard a camera click. I just saw the flash.” 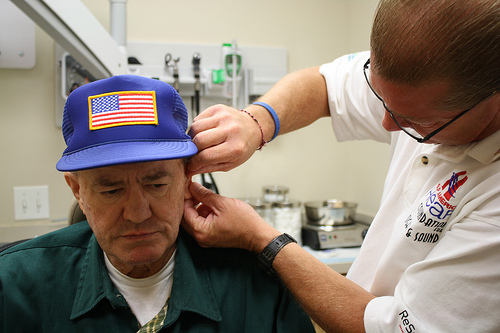 Jon Verr, 67, getting fitted for his first hearing aid at Help America Hear's event in the Bronx Saturday. Photo by Courtney Pence

Jon Verr, 67, of Flushing, Queens also knows how it feels to suffer from a hearing deficiency.

“I keep the closed captions on the TV all the time so I can understand what people are saying,” he said.

He believes his hearing began to diminish in the 1980s or 1990s, but his hearing loss was diagnosed in 2008 after a mandatory medical test prior to his heart transplant surgery.

“They tested everything from toupee to toenails and, you know, the hearing issue came up,” he said. “Of course [hearing aids] are outrageously expensive to boot so I said, ‘Pass.’”

Verr’s sister finally convinced him that his hearing impairment was negatively impacting his life and Help America Hear came to his rescue.

He wore a hearing aid for the first time today.

The recipients will return to Montefiore next week for hearing aid adjustment. They received a one-year warranty on their new equipment.

Shapiro started the Foundation for Sight and Sound in 2004. He co-founded the supplementary program “Help America Hear” with friend Dave Carr in 2009 as a way to give hearing-impaired patients tangible results.

“We rely on the kindness of friends to help support us in giving sound to others,” said Vivian Holmes, the Foundation’s Executive Director. “So, we rely on private donations from individuals, and from foundations, and from whoever feels in their heart that they want to be a part of the solution.”

Shapiro refers to the hearing-impaired community as differently-abled. The Foundation’s most recent philanthropic project is a scholarship fund.

“We like to give a hand up, not a hand out,” Shapiro said.

This is a very inspiring story. I know how expensive hearing aids can be, and to give away 18 f them, you have be very dedicated to your work. Thank you for sharing this touching story. – Hearing Aids Colorado