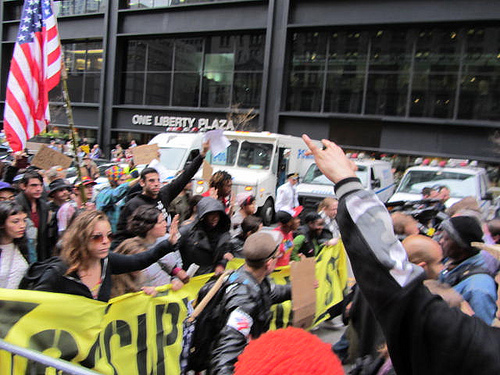 The first wave of Occupy Wall Street protestors returned to Zuccotti Park this morning, after being evicted by police last night. Photo by Chris Palmer

Occupy Wall Street protestors arrived back to Zuccotti Park in Lower Manhattan at around 10:30 this morning, chanting, yelling and skirting dangerously close to a confrontation with police, who had barricaded the park after evicting protestors last night.

The police refused to allow protestors to re-enter the park, violating a temporary restraining order issued by the New York Supreme Court barring cops from keeping protestors out.

Many protestors held copies of the court order in their hands, while chanting “We have a court order!” and “You are breaking the law!” towards police.

Jonas Marton, 29, a lawyer with the National Lawyers Guild, was shocked that the police were not obeying the court’s ruling.

He explained that at 11:30 today, a judge would hear a final ruling on whether the protestors could occupy the park, but the temporary restraining order declared it legal for protestors to enter the park until that final decision was made.

Why, then, were police not allowing anyone in?

“(Orders) have got to be coming down from the top,” he said, adding that he meant Mayor Bloomberg and police chief Ray Kelly.

“(The police) have taken it upon themselves to reinterpret the law,” said Spencer Gray, 23 of Park Slope,Brooklyn.

Gray said he thought that the raid was hypocritical of police, who stood near signs saying that the park was open, and that he wouldn’t be surprised if police started arresting large numbers of people.

“It’s been ridiculous, and I think this is a prime example,” he said.

“I think it’s a shameful day,” said Robert Reiss, 55, of Murray Hill, Manhattan. “The mayor is missing in action on every moral issue.”

In the absence of being able to enter the park, protestors circled around the barricaded perimeter, many holding angry or profane signs about Mayor Bloomberg and the police.

When the mob first returned to the area of the park after marching from City Hall, several protestors removed barricades around the outer sidewalk surrounding the park. Just when it appeared that a confrontation between the swelling mob of protestors and the wall of police inside the park was inevitable, protestors began circling the park, apparently deciding that entering would result in chaos.

They continued to circle the park for an hour afterwards. Some stood along the barricades and asked police why they were refusing to allow protestors in.

“They say they’re following orders,” said a man who identified himself only as Billy W., 23 of Bedford Styuvesant, Brooklyn.

For most protestors, though, that explanation wasn’t good enough.

“This is revolutionary territory, and the mayor is thwarting it,” said Reiss.