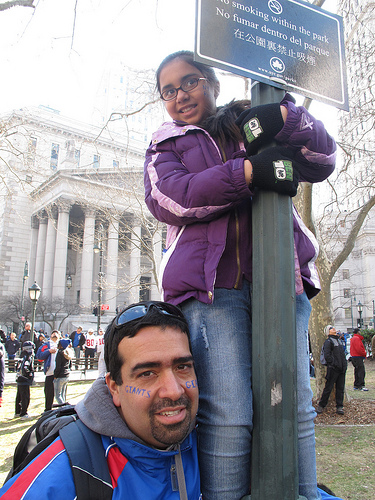 With a blue “NY” painted on her face and grinning as if she was awaiting entry into Willie Wonka’s chocolate factory, Melinda Gomez, 9, had a single word to describe how she felt about missing school in favor of the Giants’ Super Bowl parade.

“Happy is an understatement,” added her father, David Gomez, who’d brought the family in from Long Island for the occasion.

Melinda was one of countless pint-sized Giants fans who’d been excused from school to help pack the championship procession route along Broadway in Lower Manhattan on Tuesday.

In Thomas Paine Park, father-child piggyback rides were a common sight and kids, seeking better views, perched themselves in trees like oversized pigeons. In one of those trees, about 15 feet above ground, were 10-year-old twins Eric and Chris Schneider, who wore matching Giants Super Bowl shirts. They’d taken the Long Island Railroad here with their father, David Schneider, who sat underneath the tree like a spotter at an Olympic gymnastics event.

“These guys never miss school,” the elder Schneider said. “But this is worth it.”

Schneider said he had no misgivings about removing his kids from school, since they’re both straight A students.

Plus, “their mom said it was okay,” he said. 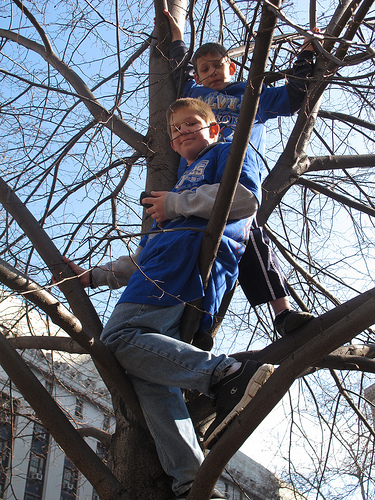 Twin brothers Chris and Eric Schneider, 10, climbed a tree to get a better look at the parade route. The straight A students missed their first day of school all year. Photo by Louie Lazar.

Across Worth Street, where tour buses lined the curb and passing fans barked out expletive-filled chants, a group of eager elementary school children stood on steps outside the City Clerk Office. Some were giggling, others had missing teeth, but nearly all held up signs that read “Go Giants!,” “PS1 Loves U,” or “PS1 Mrs. Curry’s Class.”

An adult identifying herself as their teacher, Mrs. Curry, denied that the kids were skipping class.

“They’re not missing school,” she insisted, noting that their building was just down the street and that the event was a cultural experience.

“It’s their lunch,” she also made clear.

Back in the park, with anticipation and raucousness building as floats neared the vicinity,
Mario Gomez of Hasbrouck Heights, N.J., stood on a bench alongside his children, Mario, 10 and Odaliana, 7. Immediately after the Giants had clinched the title Sunday night, Gomez said he’d obtained permission from each of his kids’ teachers with regard to their absence on Tuesday.

He stressed that he’d attached a condition to his kids attending the parade.

“I made sure they did their homework,” Gomez said, with much seriousness. “I don’t want them to get penalized.” 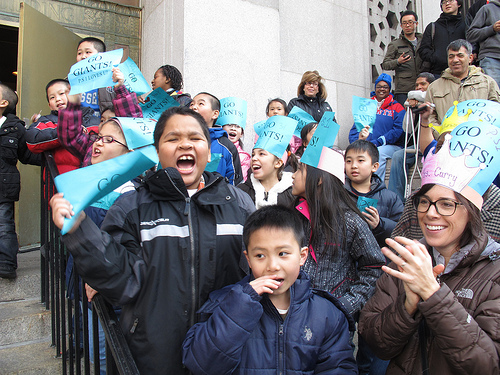 Jubilant third grade students from PS1 attend the Giants parade during their lunch break on Tuesday. Photo by Louie Lazar.