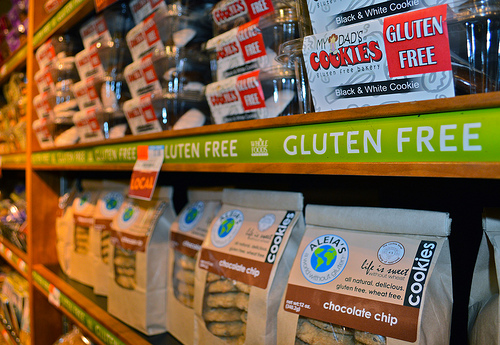 Fuelled by celebrities and the media, gluten-free eating has become a huge dietary trend in North America in the last few years: medical professionals have been skeptical; proponents of the diet say it helps with weight loss and general health. Supermarket aisles now boast an endless selection of gluten-free packaged foods. Photo by Mary Zarikos.

The thought of someone willingly going without bread and pasta makes Megan Henry, of Toronto, cringe with frustration. Henry, 23, has Crohn’s, a disease that causes inflammation and damage to the gastrointestinal tract. For her, cutting out gluten is not a choice.

“If I eat a piece of regular toast, I will be curled up on the couch for days,” Henry said. “I have to be very cautious with my gluten sensitivity. For me, eating even a crumb of gluten will trigger a flare up.”

Gluten, a protein found in wheat, barley and rye, can cause severe allergic reactions when people suffering from Crohn’s and celiac disease, a condition damaging the lining of the small intestine, eat it. Yet gluten-free dieting has become the latest dietary trend. Alternate health practitioners, athletes, personal trainers and celebrities like Oprah and Gwyneth Paltrow have attributed their weight loss and glowing skin to it. Out of the 1.6 million people on a gluten-free diet in North America, 80 percent of them have not been diagnosed with celiac disease.Gluten-free has become a full-blown fad—and skeptics and medical professionals have not been quick to embrace it.

“People want to believe there is an easy solution to weight loss, low energy, high blood sugar and other medical issues,” Nutritionist Dr. Amy Stephens, 40, of Westchester, NY, said. “Proponents of gluten-free claim it helps, or alleviates many of these issues.”

Stephens thinks it is a myth that gluten-free can solely solve these common nutrition issues in a country where the majority of people overeat on wheat-based carbohydrates.

“We eat too little of the gluten-free foods like fresh fruits, vegetables and lean proteins,” Stephens said. “Most people, fueled by the media, misinterpret the gluten-free diet.”

With the rise of the gluten-free movement, the food industry has exploded with an endless selection of gluten-free packaged foods in supermarket aisles nationwide. Consumers buy these gluten-free replacements, made with ingredients like amaranth, quinoa and cornstarch, not realizing that they are often heavily processed, just as fattening and high in sugar.

Following a gluten-free diet would require more time spent on food preparation. With 50 percent of meals being eaten out, Stephens does not find this to be a sustainable long-term dietary solution for everyone.

“Most of my patients want to spend very little time shopping and preparing foods,” Stephens said. “And so they unsuccessfully try to fit gluten free into an already stressed lifestyle.”

She does agree that cutting out gluten may be helpful for overweight patients to try as a noninvasive approach to weight loss, if done properly.

For Mai Brantley, 21, of St. Louis, Mo., the local title holder for Ms. America, gluten-free dieting combined with “clean eating,” a focus on eating pure, unprocessed foods, has been the answer to her health and weight loss goals as she pursues Ms. Missouri this coming June.

“I thought the whole concept was really strange at first,” Brantley said, referring to her personal trainer who lost 13 pounds after eliminating wheat from his diet. He urged her to watch “Hungry for Change,” a documentary about the hidden truths of dieting and the food industry.

“I didn’t know so many chemicals derived from wheat,” she said. “Now I look for products that are gluten-free, but not high in chemicals.”

Brantley, who is not allergic to wheat, says she will only eat Ezekiel 49, a kind of bread made from sprouted wheat. Anything that is not true wheat, she will not touch.

“I’ve lost a ton of weight,” Brantley said. “When wheat was in my diet, I was always hungry for something bread related. Since going gluten-free, my cravings subsided. One of the areas of the competition is swimwear. So it’s really a big deal to get in shape.”