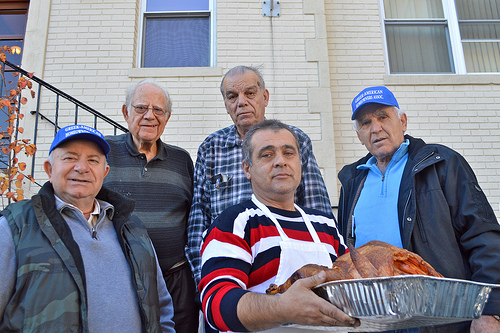 Petros Stathatos, (right) and members of the Greek American community in Astoria pose with the turkey that they will be feeding the poor with in a local soup kitchen on Thanksgiving Day. They said they wished they could do they same for the people of Greece. Photo by Mary Zarikos

On Thanksgiving eve volunteers and community members of the Greek American Home Owners Association (GAHOA) in Astoria, Queens, threw on their aprons to boil potatoes, carve turkeys, and organize rations for their annual Thanksgiving soup kitchen.

For days they had worked to prepare the meal that would feed over 2,000 people. Though joyful about the bountiful food they could give to the needy, some volunteers had mixed feelings as they thought about their families and friends struggling in Greece.

“If only I could do the same for Greece,” said Theoklitos Matsoukatidis, 67, of Astoria, one of the volunteers. “I’d do anything to help the Greek people right now. They are really suffering.”

For the last three years, the Greek nation has suffered an ongoing period of economic and political turmoil, intensified by harsh austerity measures imposed to save the debt-ridden country from defaulting from the euro currency zone. And the austerity measures just keeps coming.

With 9.4 billion euros in cuts scheduled for Greece budget for 2013, this means more cuts to pay, pensions and social benefits, raising the retirement age from 65 to 67 and higher taxes. With a national unemployment rate of 25 percent, more than one-fifth of the population now faces poverty.

“It’s ironic that I am here doing this,” Matsoukatidis said, referring to his volunteer work at the soup kitchen. “It makes me sick to see on television Greeks lining up for food and searching through dumpsters.”

There are approximately 10 million Greeks living outside Greece with about 4 million living in the US. Like Matsoukatidis, many Greek Americans are worried and frustrated with the never ending crisis in Greece. There is little they can do, but work with their local church to help and try to contribute what they can.

“They passed the tray around at church twice,” Matsoukatidis said, referring to the fundraising efforts of the Greek Orthodox Church in Astoria. “And I gave money both times. It’s not much but I give whenever I can.”

Vice president of the GAHOA, Petros Stathatos, 72, of Whitestone, spends five months out of the year in his summer house on the Greek island of Kefalonia, where he also visits extended family and friends. To those who are retired and struggling, he has been sending money and clothes over the last few months.

“It’s really hard,” Stathatos said. “Here my daughter is a lawyer and my son is an architect. In Greece, my family waits around for the government to send them a monthly pension and it’s barely enough to survive on.”

In May, the Federation of Hellenic Societies of Greater New York, an ‘umbrella’ non-profit organization consisting of hundreds of Greek societies, started a food and clothing drive for Greek American members to contribute. General Secretary of the Federation, Petros Galatoulas, 55, of Astoria, said that everything that they collected was sent to Athens last month.

“We sent hundreds of boxes of clothing and even some canned food to the Church in Greece,” Galatoulas said. “And we also just opened a bank account so that we can start sending money too.”

Bigger outreach efforts have also been initiated by other Greek American organizations like the American Hellenic Progressive Association (AHEPA) and the Hellenic Relief Foundation. Both have been raising funds that have been put towards buying food boxes, medical supplies and keeping schools running in Greece.

President of the Bergen Country chapter of AHEPA, Constantinos Mikelis, 50, of Wyckoff, NJ, has been working with other AHEPA chapters, private sector partners and other Greek American organizations to collect money and medical supplies.

“We are trying to mobilize the Greek American community here,” Mikelis said. “We made it easy so that all they have to do is go online and make a donation if they want. We’ve raised over $100, 000 in the last year.”

Mikelis said that many AHEPANs in the New York region are also involved in the Hellenic Relief Foundation, a non-profit philanthropic organization that was created just last year. With its focus on health and nutrition, members of the foundation have been going to Greece, at their own personal expense, to deliver food boxes to those in need.

“They purchase the food locally to help out the Greek economy,” Mikelis said. “Volunteers do all the packaging and delivering. It’s really inspiring stuff.”

The issue of health care has been another serious problem in Greece, since it is fully funded by the state. Because drugstores have not been receiving money from the government, the purchasing of medicine and medical supplies has stalled, leaving those dependent on their weekly prescriptions in an insufferable position.

Ioannis Grammatikus, 30, of Astoria, has been involved in an organization with ties to medical workers in Greece. For the past few months, he has been sending over-the-counter drugs from New York to Athens.

“I wiped out the shelves at Walgreens and it’s not even going to help those who really need medical attention,” Grammatikus said. “Imagine Greek seniors waiting in line for weeks to receive their prescriptions of insulin. It’s inhuman and humiliating.”

A waiter at Uncle George’s Greek Taverna in Astoria, Grammatikus says that between his day job at the restaurant and the relief work he is doing for Greece, he barely has a second to himself.

“I’m busy and exhausted,” Grammatikus said. “But the only way for anything to improve is if we are active. My dad is getting half his salary, my sister is unemployed. They are having it much worse.”

With the, financial crisis in Greece being scrutinized in the media, the nations has been on the receiving end of some charged generalizations, often coined as a nation of “siestas, tax evasion and people cheating the system”.

Yvonne Dallas, 74, of Fort Lee, NJ, feels the country does not deserve the bad press, which only worsened during the last U.S. presidential campaign.

“Romney claimed Obama was going to turn the U.S. into another Greece,” Dallas said, referring to the government spending beyond its means. “He should have said another Europe. This is a Euro-zone crisis. It is not a problem unique to Greece.”

For the last 43 years, Dallas has been teaching Greek and music at the Greek Orthodox Church in Tenafly, NJ. But she feels the church should be doing much more to raise money for Greece, a country that holds religion at the center of its nationality, by starting a campaign.

“If every single Greek living around the globe gave $10, it would make a difference,” she said. “It would not cover the debt,but it would show the solidarity between Greeks of the diaspora and the homeland. It would boost Greek morale.”