Groups spread their own message at 9/11 memorial service 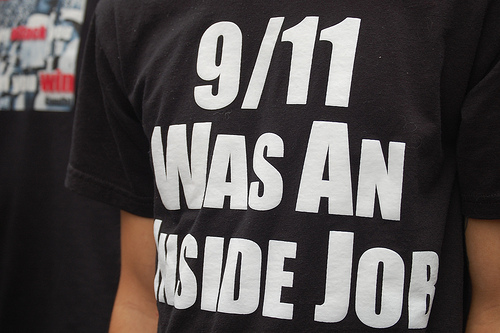 Protestor, Aiden Purcell, of Lakewood, N.J.wears a protest t-shirt with his views at the 9/11 memorial service today. Photo by Kait Richmond

Thousands of people traveled to ground zero on Sunday to commemorate the 10th anniversary of 9/11, but some were hoping to do more than pay their respects. Different groups, with the goal of spreading their own messages, stood outside the memorial trying to be heard.

On an emotional anniversary, the groups promoting themselves were often met with hostility. John Olin, 26, of Smithtown, N.Y., was leading Youth With a Mission, a Christian group that trains young adults and sends them on outreach missions.

Olin and three others stood by a red booth called a “prayer station,” and handed out religious booklets. Olin said they were not looking to condemn or convert, just to help.

But it’s hard to help people who don’t want it, he said. While two people stopped to pray with a woman from Olin’s group, another viciously screamed, “No!” in her face and ran past. Olin admitted that the group was having difficulties in Lower Manhattan.

“It’s better uptown,” he said. “The response here is colder.”

At nearby St. Paul’s Cathedral, “Truthers,” who support various Sept. 11, 2001 conspiracy theories, held signs that read, “Danger! USA Did 9/11” and “10 Years…No Justice.” The peaceful crowd turned riotous when truthers chanted, “Honor the victims by demanding your truth,” while passers-by yelled obscenities from across the street. Police and other security struggled to keep the crowd moving.

Aiden Purcell, 20, of Lakewood, N.J., was not standing with the Truthers, but wore a shirt that read, “9/11 was an inside job.” A man who stood nearby noticed Purcell and started yelling at him. Just as the man made a fist, a friend pulled him in the opposite direction.

“It’s the other side that starts the confrontation,” Purcell said.

He and his three friends are members of We Are Change, a social group that has taken on 9/11 as one of its causes. The men said they came to pay their respects, but to also demand justice.

“We are just trying to get the truth to people,” said Purcell, whose uncle was part of the 9/11 clean-up and is now sick. “I want truth for him.”

As he and his friends explained their views, a small group of people gathered around to listen. Purcell said that people are interested, but do not know enough about it.

But Lauren Folloni, 28, of Boston, Mass., believes it is wrong for anyone to promote messages about controversial topics like religion and conspiracies on the anniversary of 9/11.

Of the conspiracies, Folloni said, “Whether they’re true or not, all that matters today is to remember.”

She added that she finds conspiracy shirts, like the one Purcell wore, offensive.

“Even in silence, it’s just not right,” she said.

However, Purcell and his friends feel stripped of their First Amendment rights each year on Sept. 11.

“Today, there isn’t freedom of speech,” he said. “Today, we aren’t really America, but tomorrow, we will be again.”

While Sgt. Denoh Grear, 30, of Pawtucket, R.I., does not necessarily agree with what everyone has to say, he thinks that it is important to observe First Amendment rights.

“Everyone has opinions and rights, and freedom of speech, it’s why we gather here today.”