Hard-court bike polo players engage in a match at The Pit on the Lower East Side. Photo by Alexandra DiPalma

Each Sunday in Sara D. Roosevelt Park in the Lower East Side, six athletes ride small bicycles, racing back and forth over a blacktop surface about the size of a tennis court. They are divided into teams, and most wear helmets, padding and hockey gloves. Each player wields a mallet, attempting to hit a small plastic ball into a goal while biking without crashing, falling or putting a foot to the ground.

They are playing hard-court bike polo, a variation on traditional horse polo. And while the sport is usually associated with high society and royalty, bike polo matches in Manhattan’s Lower East Side draw a more diverse following.

According to Doug Dalrymple, the unofficial promoter of New York City bike polo, interest in the sport has steadily increased in recent years. But despite its growing popularity, many New Yorkers still know little about hard-court bike polo.

“If I had to describe the game to someone who knew nothing about it, I’d say that it’s something like horse polo, with the feel of street hockey,” Dalrymple said. “On bikes.”

Dalrymple has been playing for more than five years. Now, he helps to organize league play and is responsible for running the club Web site.

The community’s loose attitude makes the sport accessible to newcomers, and the nature of the game attracts young players who cannot necessarily afford a horse. Players ride on souped-up bicycles and use homemade mallets. Rather than a 300-yard grass field at an exclusive polo club, hard-court bike polo is played on parking lots or basketball courts.

In New York, enthusiasts gather at an asphalt court called The Pit, between Chrystie and Grand streets. Large crowds come out every Tuesday, Thursday and Sunday to watch pick-up games played by bike polo veterans and rookies alike.

The Pit has been the location of several high-profile bike polo tournaments and is a well-known venue throughout the national bike-polo community. Just last week, a two-day tournament at The Pit drew bike polo teams from France, England, Germany, Switzerland, and all over the U.S. and Canada.

While the game might sound like some new-fangled extreme sport invented by urban youth, there is a great deal of history behind it.

“A lot of people think it’s a new thing, but bike polo has been around almost has long as bikes,” Dalrymple said. “It probably looked a lot different than this, considering bikes had just been invented, but the idea is still the same.”

First played in Ireland in 1891, traditional bicycle polo was played on a rectangular grass field and was included as a demonstration sport in the 1908 London Olympics.

Hard-court bike polo is different from the original game in that the rules are less formal and can be played in a wider variety of spaces, making it popular in urban environments where large grass fields don’t exist.

Most of the New York regular bike-polo players are men in their 20s and 30s, but there are a few die-hard players who are exceptions.

“We have college students and young people, but we’ve also got a few women, and our most senior player, Frank.” Dalrymple said. “I’m not sure anyone really knows how old he is.”

Frank Marcus, a middle-aged man who jokingly claims to be 25 years old, comes from his home in Long Island to practice each week. Like Dalrymple, he’s been playing for about five years and has no plans of stopping anytime soon.

“I just like to come out and enjoy the game,” Marcus said. “But sometimes I get in trouble for it. I got a few drinking tickets from the cops for having beer during the games.”

Marcus’ teammates tease him about the incident, and one of them caught the exchange on video and posted it to YouTube. Now Marcus is well known throughout the bike polo community for his run-ins with police.

“At the tournament last week, guys kept coming up to me and saying ‘You’re that guy who got the drinking ticket! You’re famous!’ ” Marcus said. “I still haven’t seen the video.”

Marcus and many of the other regular players have been dedicated to the game for several years, and they have the scars to show for it. 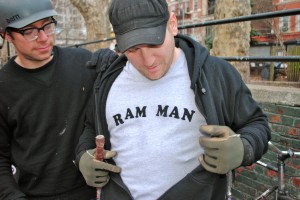 Phil “Ram Man” Miarmi, 34, moved to New York in 2007 and first saw a bike polo match at The Pit within his first few days in the city. He immediately was hooked.

“I started playing right away,” Miarmi said, unzipping his jacket to reveal a custom-made T-shirt with “Ram Man” emblazoned across the front. “And it’s been painful ever since.”

Miarmi is notorious for his countless injuries, and his tendency to cause them on the court.

“The first time I was out there, I just remember smashing into everyone, going full speed into the wall and pieces of my bike flying in the air,” he recalled. “I just don’t care.”

He has marks from several injuries, including cuts, scrapes, blackened nails and even a bruise that he had to “drill a hole in to get the blood out.”

Miarmi is not the only one with battle scars. Ethan Benton, 33, from Brooklyn, has been on hiatus since his shoulder injury.

“I fell off my bike, then my arm fell out of the socket, then I moved my arm and nothing went back the way it was supposed to,” Benton said. “So I’ve been taking a little break.” 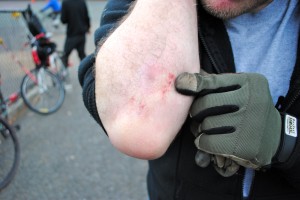 Phil 'Ram Man' Miarmi shows off one of his many bike-polo-related injuries. Photo by Alexandra DiPalma

Even the newcomers seem immune to the roughness of the game. Sara Wojcik, originally from New York, started playing bike polo in Poland a few months ago while she was living abroad. Wojcik and a few friends started a club in Warsaw when her mother agreed to sponsor them, providing mallet head material and balls.

“I came back to New York for a vacation, then I intentionally missed my flight back to Poland and went to my first polo tournament in Richmond, Virginia,” Wojcik said. “It was totally worth it, but it was very, very ‘bro.’ ”

Wojcik doesn’t mind being one of the only women in the scene. In New York, she has helped to organize a women’s bike polo night, or as they refer to it, “no bro polo.” Since skipping her flight back to Poland, Wojcik has had a lot of time to focus on the game.

“I’m still unemployed at the moment, so polo kind of rules my life,” Wojcik said, while bandaging her knuckles to cover a fresh cut. “It’s awesome and awful at the same time.”

That is so true, keep me up to date. Great Blog by the way 🙂

[…] Nice article about New York Bike Polo and the growing popularity in the US. So it seems that Bike Polo is the same all over the world. […]

Fine post, I found your blog while I was doing a research on the internet.

Great I also like your smooth and clean design.

I feel like I’m constantly looking for interesting things to read about a variety of subjects, but I manage to include your blog among my reads every day because you have honest entries that I look forward to. Here’s hoping there’s a lot more great material coming!

Genuinely brilliant piece, I really liked reading through it. It had a number of wonderful insight. I am bookmarking this web page.

Great site, have been back a few times now and am really enjoying it 🙂

Hi, I’ve been a lurker around your blog for a few months. I love this article and your entire site! Looking forward to reading more!