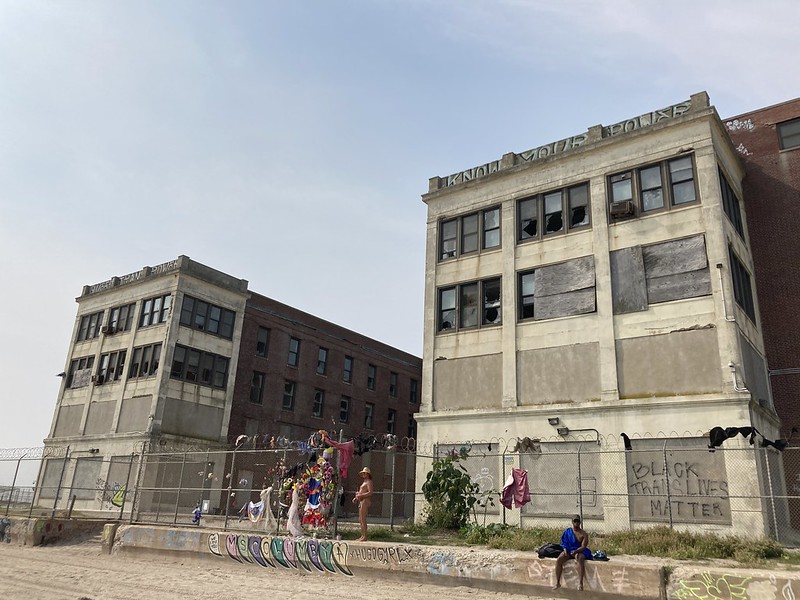 The former Neponsit Hospital has long shielded The People’s Beach at Jacob Riis Park in Queens, from prying eyes. As it crumbles, queer and nude communities there fear for the beach’s future.

The hospital, adorned with graffiti that reads “Trans Lives Matter,” and “Queer Freedom,” looms over a small corner of the beach. Some residents are advocating for a playground to replace the building, which threatens the de facto nude status of the beach by introducing children within eyesight.

“It’s always been a queer beach,” said Victoria “Queen of Riis” Cruz from under her sun tent. “We’re born naked, 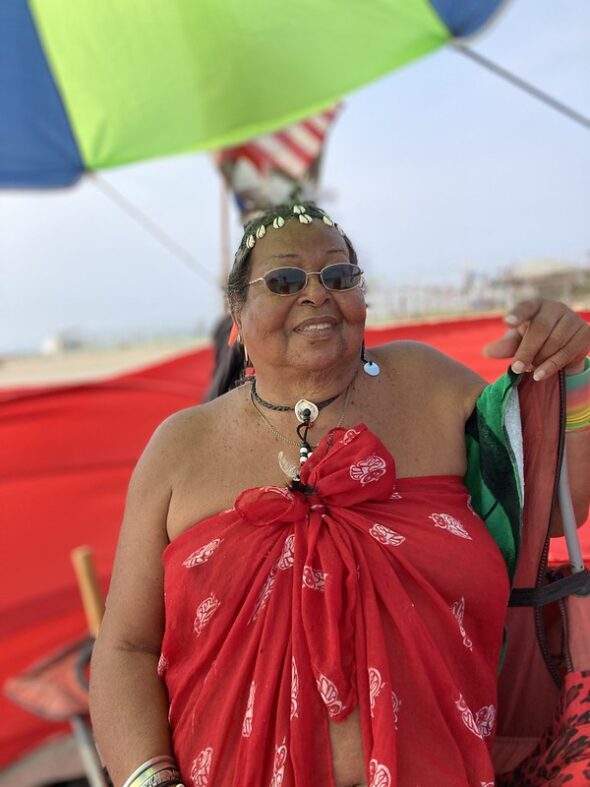 Victoria ‘Queen of Riis’ Cruz enjoys an afternoon at The People’s Beach, the queer Jacob Riis Park beach in Queens she has frequented since the 1960’s. Photo by Annie Iezzi

everything else is just an asset.”

Cruz has been frequenting The People’s Beach  since 1963. She said that convalescent patients from the hospital used to frolic with the beachgoers, enjoying the healing power of the ocean.

The queer community and the nude community at The People’s Beach–with much overlap between them–have initiated petitions to #saveriisbeach. The beach would be closed during the demolition, and likely impacted moving forward, dependent upon the future development of the plot.

Veronica Kirschner, a nudist who has enjoyed Riis for more than 10 years and who initiated a petition to make Neponsit Hospital a scenic landmark, worries about decreased privacy and increased police presence. She said that last week, she was harassed by park rangers demanding identification while she sunbathed in the nude.

“When we come together in community, we are spectacular,” she said, regarding organizing efforts to mitigate harm from the demolition.

Another petition, Protect NYC’s queer beach, has been circulating on Instagram, courtesy of Pony Knowles. An Instagram account, riis.beach, that posts historic and contemporary images of life at Riis, has also been instrumental to community mobilization. On that platform, concerned beachgoers organized a “save Riis beach” community Zoom to share information, skills, and ideas. More than 60 members of the LGBTQ+ community attended in support, and a second Zoom meeting is scheduled for Friday. 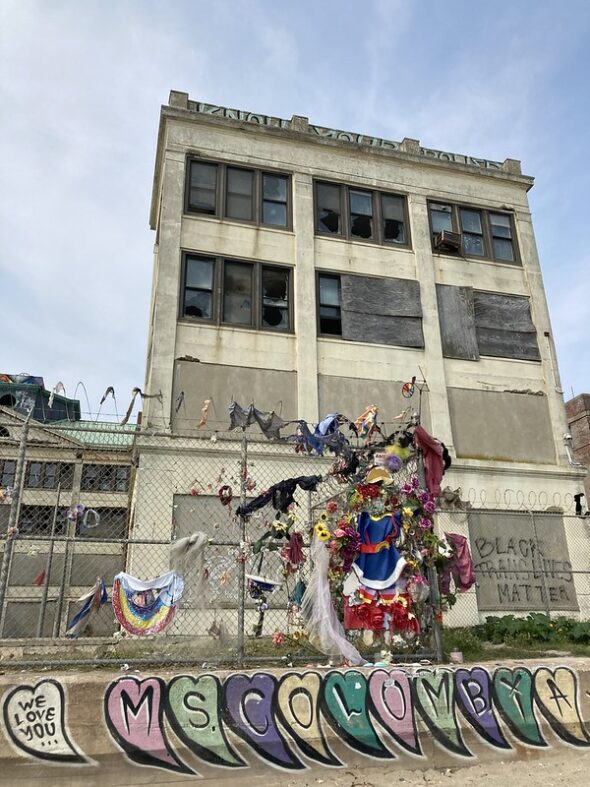 A memorial to the late Ms. Colombia, a beloved New York City queer icon, hung on the barbed-wire fence at The People’s Beach in Jacob Riis Park in Queens. Photo by Annie Iezzi

The effort to save the beach is as much rooted in its history as its present. Many worry about the destruction of a memorial to the late Ms. Colombia, a beloved NYC queer icon, that has long adorned the barbed wire fence between the hospital and The People’s Beach. A colorful wind spinner pokes out between the wires, twirling amidst blooming fake flowers and an homage rainbow dress.

Queer beachgoers are especially concerned about the closure of the beach, community safety, and the possible diminishment of queer gathering space.

“Riis Beach, particularly this corner in front of the abandoned hospital, is a safe haven for queer, trans and nonbinary folks, and it’s important that it remains that way,” said trans-inclusive sex educator Cristina Pitter.“The abandoned hospital reflects the way that marginalized people are also abandoned, so finding sanctuary here alongside this building goes hand in hand.”

Pitter said that park facilities and accessible bathrooms could be constructed on the empty lot. Others on the beach said they would like to see a community or holistic healthcare center erected there, and some suggested that a privacy sand dune would suit the plot well.

“One can only hope that New York City will have a proper infrastructure in place to build, protect and advocate for marginalized communities in this space,” Pitter said.

Constructed in 1914 as a tuberculosis hospital, and officially known as the former Neponsit Nursing Home, the iconic Queens building has housed medical facilities since its erection. In 1998, the hospital made headlines in its last iteration as a nursing home, when the city relocated all its residents without warning and in the middle of the night, citing unsafe building conditions.

Last spring, during a turbulent storm that hit the Rockaways, a chunk of corrugated metal flew off the hospital’s roof and into the driveway of a nearby house. According to Robby Schwach, the Deputy Chief of Staff under City Councilman Eric Ulrich, this active decay kicked off the city’s most recent move to demolish the hospital.

“It would be crazy to keep paying money to maintain it, when it is falling apart,” said Schwach, who is also a community liaison for the office. He says that City Health and Hospitals, which owns the property, has selected the architecture firm Urbahn to design the demolition.

Urbahn hopes to present a demolition plan this fall and could have “shovels in the ground” by spring, Schwach said. The city will also host a community meeting to hear the concerns of beachgoers and neighborhood residents alike. According to the original deed, if the plot is not used for a healthcare facility, it will automatically become a city park, but whether or not that park’s playground will abut The People’s Beach remains undecided.