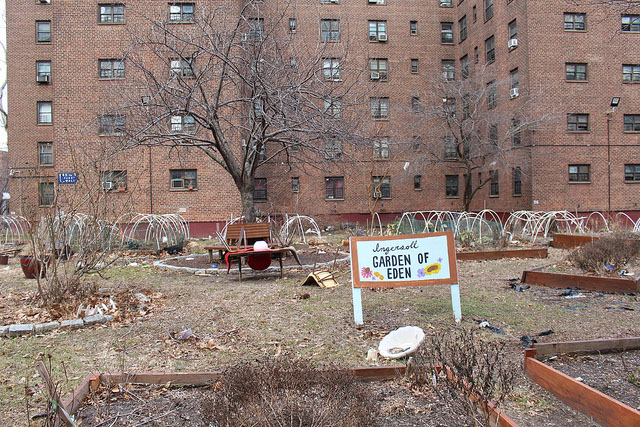 The Ingersoll project’s Garden of Eden grows fruits and vegetables during the warmer months. Photo by Teddy Haines.

Nestled into a compact segment of South Brooklyn, the Raymond V. Ingersoll Housing project is encircled by more prosperous neighborhoods. The Metrotech Center sits directly across Flatbush Avenue to the west, alongside NYU’s Tandon School of Engineering. But now, the Ingersoll Houses also find themselves at the center of a heated debate over the future of public housing in New York City.

The Ingersoll project is operated by the New York City Housing Authority, which is currently under fire for systemic neglect and abuse of its 400,000 tenants. Last June, federal prosecutors accused the authority of covering up appalling living conditions for public housing residents, including lead paint, faulty heating, and infestation by roaches and rats. The report ultimately led to the city government accepting greater oversight from the federal government as it moves to alleviate the crisis.

In Ingersoll, deprivation has taken the form of intermittent heating, which puts pressure on families with young children. Despite this, residents reject the pessimism that colors public perceptions of New York public housing. Resident Janai Tucker cited familial bonds and the project’s sense of community as sources of strength for its residents.

“Sometimes the neighborhood can be dangerous,” Tucker said. “But it’s like a family…it’s all built up off of family members. There’s people that lived in Fort Greene five years ago, and they have family in Fort Greene, so their kids can know people in Fort Greene.”

Dwayne Fussell, a former public housing worker, has lived in the Ingersoll project his entire life. And for him, the community’s prospects have improved significantly since the turbulence of previous decades, although heating remains a major concern.

“The heat and hot water is not as great as it used to be,” Fussell said. “I’ve seen that they’d dug up all the ground and put these big lime-green pipes down here, and I don’t see what it’s supposed to have done. But now, if you look they’re putting the right pipes down there. Now, the heat is starting to come up and the hot water’s starting to come up.”

These improvements haven’t completely remedied the situation, however. The main obstacle now, according to Fussell, is consistent heating.

“You need heat and hot water all the way around, from morning, noon and night,” he explained. “But it’s still not like that. At night, a person that has a child, an infant, in the house, why do you have to bundle up that infant in layers of blankets at night, when you’re supposed to have the heat at night? I went through this with my son. My son is 16 now – I went through this since then.”

More than anything, Fussell seemed to take heart from his fellow Ingersoll residents, and the communal spirit they embodied.

“You have a lot of productive people here in the projects that does good,” he said. “It’s not all as bad as everybody make it seems.”

One of Ingersoll’s productive residents is Michael Pabon. An Iraq War veteran, Pabon assists his neighbors as a carpenter and electrician. And after 12 years in the project with his wife and son, Pabon feels optimistic about the community’s future.

“NYCHA have improved, but they do have their faults,” Pabon said. “Living conditions at times are, bad. And that’s all with a phone call, within the system. You have to let them know what’s going wrong, what’s broke, and what a tenant can expect to get fixed. But other than that, this neighborhood has come a long way in the last 20, 30 years.” 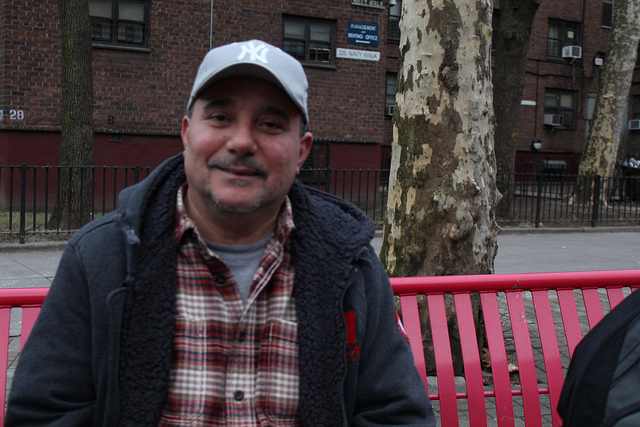 Apart from NYCHA responsiveness, Pabon cited other improvements in the neighborhood’s quality of life. He pointed out recent construction of a laundromat and other amenities, as well as the project’s increasing ethnic diversity.

“Lot of nice Asians, Africans, Indians, there’s a big ethnic melting pot here, and for the most part, everyone gets along,” Pabon said. “You have those very few that unfortunately make the neighborhood not so nice. But we have to live with it, and we make the best of it.”