In Harlem, hundreds celebrate the re-opening of founding father’s house 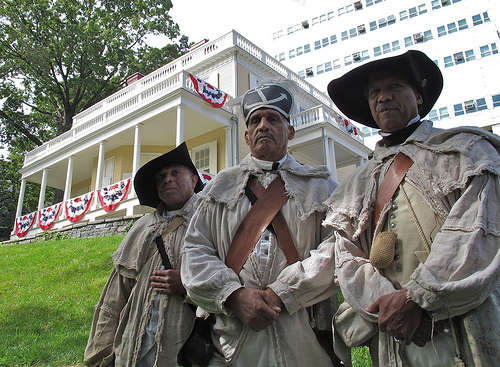 Rand Scholet stared up in awe at Hamilton Grange atop Saint Nicholas Park, the only house that U.S. Founding Father Alexander Hamilton is ever known to have owned. Just moments earlier, the U.S. National Parks Service had opened the newly-restored home to the public during an unveiling ceremony yesterday that attracted hundreds of visitors from the surrounding Harlem, Manhattan neighborhood and beyond.

“I can’t believe it,” said Scholet, a die-hard Hamilton enthusiast who said he drove a whopping 1,300 miles from his hometown of Clearwater, Fla. just to be here. “It’s such a dream come true to see where this fascinating gentleman lived.”

“I’ve read 32,000 pages and 27 books on Alexander Hamilton in the past two and a half years,” boasted Scholet, who wore a blue NASA jacket with a pin featuring Hamilton’s likeness. Scholet’s baseball cap, also with a Hamilton pin, contained the words “St Kitts & Nevis,” referring to the Caribbean island where Hamilton was born and raised. During a recent pilgrimage, Scholet said he’d journeyed to that island via cruise-line.

“I’ve been to all of Hamilton’s homes,” he said.

The Hamilton Grange National Memorial’s previous location had been a few blocks away, semi-hidden between a church and an apartment complex. But the parks service restored the yellow and white structure, now at the corner of 141st Street and Hamilton Terrace, to its original appearance after five years of research and renovation, according to project organizers and architects. The original house, built in 1802, stood on another property less than a quarter mile away.

Some visitors waited more than 30 minutes for a glimpse at the memorial’s interior, which boasts a museum-style exhibit commemorating Hamilton, who was a congressman, Federalist Papers co-author, and the United States’ first Treasury Secretary.

Approximately 1,200 people attended the event, said Mindi Rambo, a public affairs officer for the parks service. Park rangers, community leaders, and officials with ties to the project said they expect the remodeled site to boost the neighborhood financially.

Ed Aleksey of Bay Ridge, Brooklyn was one of many Hamilton admirers who ventured to Harlem for the festivities.

“I’ve been a big Andrew Hamilton fan since I was a kid,” said Aleksey, a 57-year-old accountant, who in 2004 attended a re-enactment of the duel that took Hamilton’s life. “I think [the memorial] is wonderful. He’s a Founding Father from New York.”

Like other Hamilton fans, Aleksey cited Hamilton’s humble roots and exotic ‘rags-to-riches’ narrative, lauding Hamilton as a great man who through wisdom, creativity and ambition did so much to shape a republic. 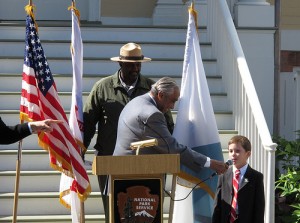 Earlier in the day, a Hamilton impersonator had made a glorious entrance, riding in on a horse-drawn carriage that clip-clopped down 141st Street to the sound of live bagpipes. ROTC guardsmen presented colors, a Harlem choir sang the Star Spangled Banner and dignitaries executed prepared speeches.

Congressman Rengal, who had helped promote the restoration project and as usual sported his trademark bow tie, invited the small redhead up to the podium, and angled the microphone towards the little Hamilton on this Constitution Day.

“I want to say something,” squeaked the youngster as the crowd geared up for its most ferocious applause line of the day. “My seventh great-grandfather is on the ten dollar bill.”

thanks for this great posting, very evocative. i can’t wait to stop by the new place

Louie, within a week after seeing you, something big happened. I stepped up to found the Alexander Hamilton Awareness (AHA!) Society. We have developed two extensive websites: 1. http://www.The-AHA-Society.com which describes the Hamilton events we have planned and summaries of his contributions and achievements. 2. http://www.AllThingsHamilton.com that has a broad set of resources on his life. On January 11th, there will be a big birthday event at Trinity Church at 1 pm. At 5 pm at the Museum of American Finance (48 Wall Street) will be a synchronized cake-cutting with his birthplace in the Caribbean on the island of Nevis. Thanks again for highlighting the Founding Father of Harlem at 414 W. 141st St.