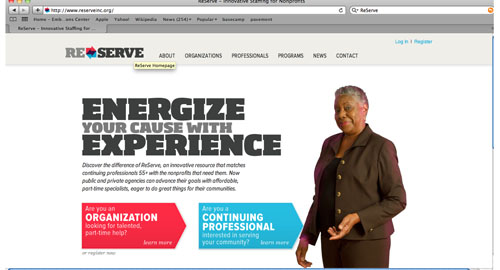 ReServe is a non-profit that matches adults 55+ with jobs.

When Mindy Lewis, 59, arrived at what would be the first of a long line of unpromising job interviews, she was surprised to find that the person interviewing her for the position was half her age.

“When you’re in your fifties and you go into an interview and the person who is interviewing you is 30, it’s just uncomfortable,” Lewis said. “I felt unnecessary and unhireable and too old.”

“Some of the challenges people in the workplace face is ageism, and it’s even harder for women,” said Aurora Salamone, Special Advisor at The New York City Department of Aging.

“In a time of a challenging job market, employers look to get the most qualified person for the least amount of money,” said Tory Johnson, the Chief Executive Officer of Women for Hire, a career recruiting website geared towards college-educated women. “Having a higher salary or higher salary history can hurt your chances of getting hired.”

Lewis, who owns a graphic design business, started losing clientele in 2005. But when she began seeking additional work, she said she was just too old to compete in the shrinking job market.

“I would show my portfolio and people would respond well to it, but I would not hear back from them,” Lewis said. “I just thought, ‘I’m getting older, the workforce is getting younger, and I can’t do this. It’s not working.’”

Scraping by as a part-time writing teacher at the YMCA, Lewis has since given up her search for full-time employment, cut back on personal spending and switched her health coverage to Healthy N.Y., a New York City health plan for individuals making less than $25,000 a year.

“I am living from hand to mouth and I probably will never be able to retire,” she said.

One 64-year-old woman, who did not want to give her name, worked as the senior vice president at a media organization for more than 30 years and was laid off in 2009, along with 10 percent of fellow staff members who also had high-paying positions. Shortly after, she turned to ReServe, a nonprofit organization that provides part-time employment to people over the age of 55.

She has since bounced between several temporary positions. In those rare times she gets called for an interview, she said she often hears the same response from employers.

“I am frequently told that I’m overqualified for the job,” she said. “You pretty much have to dumb down your resume so it doesn’t look like you’ve held a really big job or make it seem that you’re not old. That just doesn’t sit well with me at all.”

Many women have found ways to shift the focus away from their age on job applications. Johnson’s company often instructs older clients to only include the last 10 years of their employment history and to take out their college graduation date if it was any time before the 1970’s.

The company also urges clients to strengthen their social media skills to keep up with younger competitors. Yet for some women, this is easier said than done.

“There are a lot of older people for whom a job search meant calling someone on the phone, meeting them, shaking hands and seeing them Monday morning,” said Johnson, who urges all of her clients to create LinkedIn accounts so they can cultivate a respectable employment presentation on the Internet. “Now, so much of the job process is online. It can be a barrier for an older person.”

Johnson said many women over the age of 50 have scrapped their hopes of landing a top position with a high-paid salary, and most look to get by with part-time gigs.

“The typical theory is that the older worker always wants more money, but in this market, they just want to work,” said Phillip Press, a principal at Temporary Alternatives, a staffing agency based in Manhattan.

“I don’t remember a time in my life when the employment picture was as bleak as it is now,” said the ReServe client. “I would hope that employers would take a harder look at seeing the value that an older, experienced worker brings to the table.”

This type of advice: “Take out the date of graduation, remove some work history” is a problem because most jobs today require applying online via online applications that do not allow you to skip anything or remove any dates. You cannot make your resume look better with awesome formatting or choosing between chronological or skill-set. Today, you have to just fill out the online app the way it’s set up and hope for the best. Most resume advice today is outdated and irrelevant.