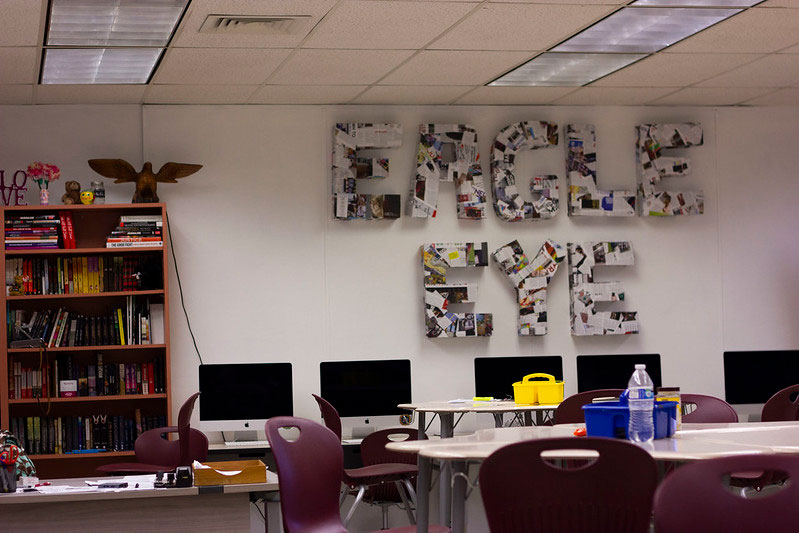 Shortly after the deadly shooting that took the lives of 17 people, at Marjory Stoneman Douglas High School, in Parkland, the school paper’s advisor, Melissa Falkowski, started calling upon her newsroom team.

“I reached out to the kids and I told them that, you know, this was their job,” Falkowski said. “There were kids who really wanted to work on the stories, and there were other kids who felt like they were not capable. I didn’t push kids to do things that they weren’t comfortable [with].”

Following the shooting, the Eagle Eye put out two issues of their quarterly print newsmagazine, one dedicated to the memory of those who died, and another centered on gun control and the activist movements that quickly grew out of Parkland and galvanized a whole nation. 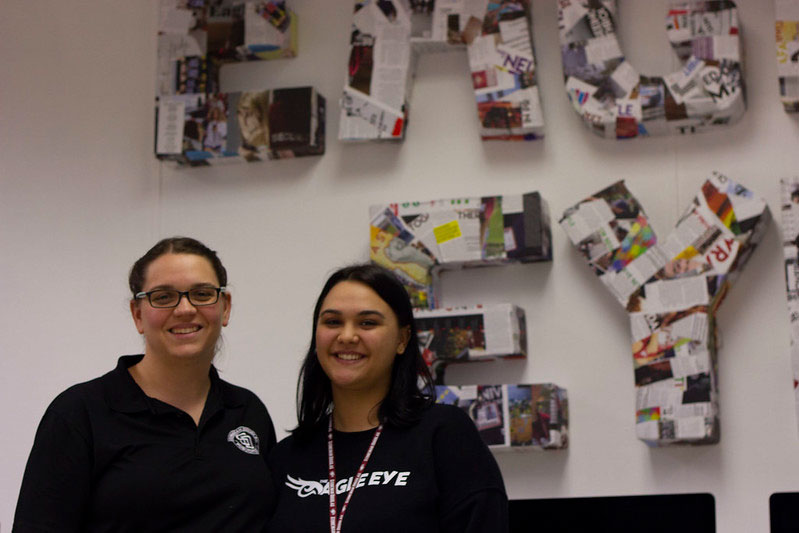 Melissa Falkowski, the school paper advisor, and Dara Rose, one of the four current editors, responsible for the print magazine. Photo by Catarina Lamelas Moura

While grieving for their peers, the paper staff stood up to the challenge.

“That was really mind opening to me, because that’s when I [realized] this is what it means to be a journalist,” current editor, Zoe Gordon, said. “I went from covering local sports games to stories larger than myself about nationwide politics.”

Almost two years have passed. These student journalists have traveled around the country, giving interviews and gone to journalism events. They have even received a special mention by the Pulitzer Prize in 2019, for their coverage.

“There was so much that needed to be said and done,” Brit Taylor, president of the Florida Scholastic Press Association, said. “Obviously the effect of what those students did is going to be felt maybe forever.”

The younger staff writers who were sophomores at the time are about to graduate, but they leave behind a legacy.

“They’ve left incredibly large shoes to fill,” Falkowski said. “Student journalists all over the country are doing really important work. And I hate that they are often discounted and told that they can’t print this or that”.

Of the four current Eagle Eye editors now applying to college, one is planning on following a career as a journalist.

“After everything happened, I got really involved. I was staying after school everyday,” 18-year-old Dara Rosen said. “The commotion of it all, there was just something that was like, oh my god, I want do this.. I love the fast pace.”

Likewise, her peers were shaped by their time in the newspaper. Brianna Fischer, for one, is looking into a career in law.

“Going into law was a way to make sure that these victims of these terrible crimes have a way to get help and make sure that that doesn’t happen to them again,” Fischer said. “Especially after everything that’s happened at the school that kind of just propelled me into wanting to help people.” 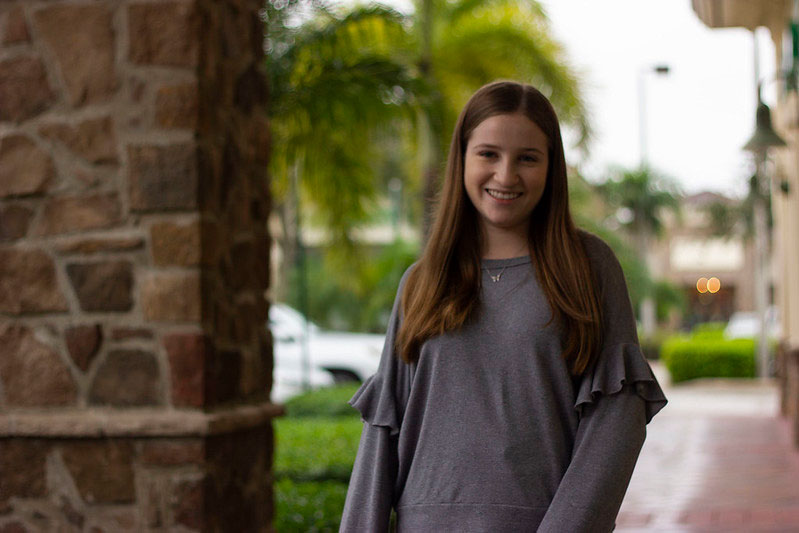 After her time in the Eagle Eye, current editor Brianna Fischer plans on following a career in the field of law. Photo by Catarina Lamelas Moura.

While not necessarily going into journalism, Zoe Gordon and Leni Steinhardt are planning on majoring in communication.

“There’s a part of me that doesn’t really imagine writing for the rest of my life, but I love the creativity aspect of journalism and just like interacting with people,” Steinhardt said.

Some of the news coverage she witnessed in the aftermath of the tragedy made her rethink a career in journalism.

“Immediately after the shooting I saw the good side of journalism, that reported on the activism, and that showed my school in a good light, that we persevered past this tragedy,” Steinhardt said. “And there is a bad side of journalism: walking out of school, teary eyed because it was just a really bad day, people had microphones in my face, it was like ‘talk about happened to you that day’. It kind of made me feel embarrassed to say I want to go into journalism.” 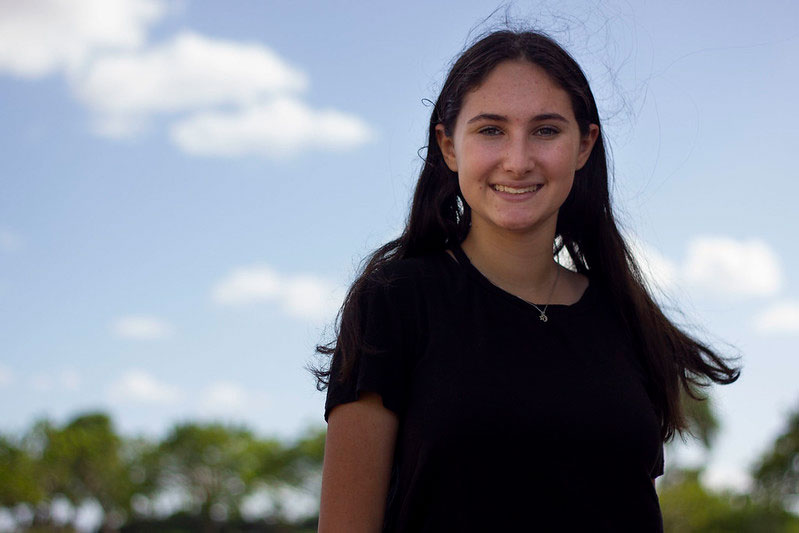 For the students tasked with covering the consequences of the shooting, as well as writing the obituaries of fellow classmates and school staff, being respectful was an important standard to follow.

“Seeing news trucks and reporters trying to shove microphones in your faces every day at the school was difficult,” Fischer said. “Even though we’re doing something on a much local and smaller level, we didn’t want to be those types of reporters. And it made us look at that, especially for people going into journalism, kind of determine who they wanted to be in the future.”

Their work was also a balancing act between the will change gun policy and their role, as journalists, to remain as objective as possible. For the issue on gun control they invited individuals who had opposing views to express their opinion.

“[The students] felt like they wouldn’t be taken seriously if they came at the issue one sided, if they didn’t allow other voices to be expressed,” Falkowski said. “They would just be dismissed as liberal.”

Besides reporting on what happened, they were dealing with their own grief, and being asked to share their stories through countless interviews and op-ed pieces. 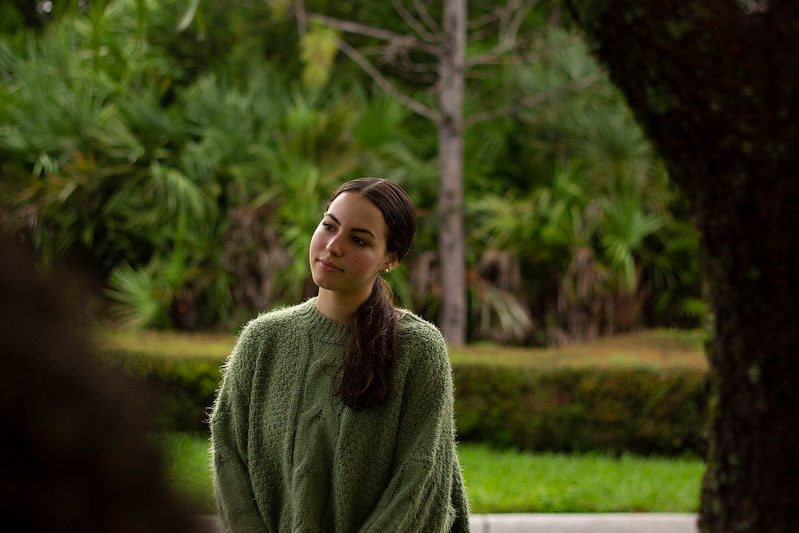 Zoe Gordon is also an editor of the Eagle Eye, and she oversees social media. When faced with the challenge of writing for the paper, after the shooting, after a first “feeling of dread”, she realized how impactful her words could be. Photo by Catarina Lamelas Moura.

“It was kind of difficult to distinguish the two, especially when you have strong opinions and when you’re also in the same position as any other students,” Gordon said. “For a lot of the pieces, we did cover them like journalists, and we did get the facts and we were making sure that everything was truthful and not editorializing.”

The staff benefited from a unique perspective from inside the school.

“All these people that other news organizations are trying to interview we can just pull them out of class and interview them,” Rosen said. “And they’re happy to talk to us, whereas they’re not going to want to talk to a random news organization.. It made it easier for everyone: for you, for the family that you were interviewing.”

In their coverage, the Eagle Eye made it a point to avoid weighing in on the trial of the shooter, Nikolas Cruz. They also steered away from finger pointing.

“This is made by teens for a teen audience. So you also have to ask, what does your readership want?,” Falkowski said. “Does the readership want to read about Nikolas Cruz? No, they don’t. So we don’t write stories about him because our audience is victimized by him and doesn’t want to hear about him. And they’re going to read about it in the Sun Sentinel anyway.”

The weeks that followed the Valentine’s Day shooting tested the limits of the teenagers, who had to grapple with their own feelings, while facing head on their self-imposed duty, working long days after school.

“I think everyone was there for each other. If you just sit there and start crying, there’d be 20 people giving you a hug and wanting to help you and support you,” Rosen said “And it was really nice to have this environment while we were doing something that was so hard and so new to all of us.”

While gun control remains an important topic, the newspaper’s staff — which as of now has 74 writers — has been trying to gradually move on and get back to reporting on the most pressing issues for their peers. At the moment, they are working on an issue about the climate.