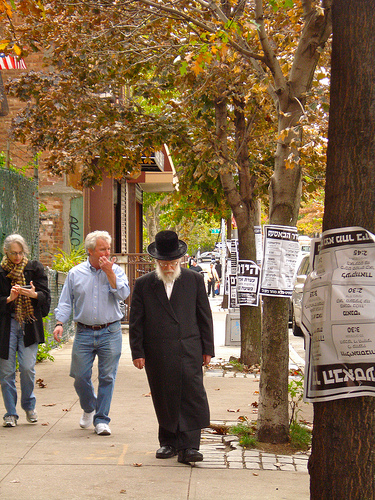 A Hasidic Jewish man walks down the street in Williamsburg. Photo by Kathryn Kattalia/NYU

Walking into Solomon Wagmar’s world is a lot like walking onto a movie set. The dressmakers and cobblers peddling wares along Lee Avenue exude an old world vibe, reinforced by the bearded men ambling down the street in stockings, black overcoats and wide-brimmed hats. Signs hanging in the windows of delis and restaurants clearly spell out the neighborhood’s dress code: “No shorts, no sleeveless.”

Indeed, not a single knee or elbow is revealed on the unusually warm late October afternoon as women in headscarves chat animatedly in Yiddish, pushing their baby strollers around a Klein’s Real Kosher Ice Cream truck unloading on the sidewalk.

For the tourists passing through on Saturdays (Wagmar says they come to see the kolpiks — large fur head-dresses worn by men on the Jewish day of rest), the enormous Hasidic district stretching through southern Williamsburg, Brooklyn, looks like a community frozen in time, immune to the trendy cafes, organic food stores and condos overwhelming the hipster-centric streets north of Division Avenue. For Wagmar, it’s simply the neighborhood he calls home.

Wagmar, whose red beard makes him look older than 26, moved to Williamsburg from his childhood home in Monsey, N.Y., seven years ago with his wife Chaya, a schoolteacher. He has a quiet demeanor, but is eager to answer questions, apologizing ahead of time for his grammar. Like most Hasidic families, Wagmar and his wife speak Yiddish at home, using English only when they don’t want their three young children to understand what they’re saying. A student of Jewish law at his synagogue’s college, Wagmar breaks to pray three times a day. He loves Twitter and avoids politics.

“In Monsey, I was scared,” Wagmar said. “When I walked out at 11 o’clock at night, I was scared because it was very quiet. When you see a car passing by with loud music, I was scared about what was going to happen. Here, whenever you walk, you see other Jewish people are in the street. I feel more safe than in other neighborhoods.”

Nestled in the northern part of Brooklyn, one quick stop away from Manhattan on the L train, Williamsburg has become an increasingly popular place to live, drawing a diverse population that continues to grow. Boasting almost 150,000 people, the neighborhood is home to vibrant Polish and Puerto Rican communities and is a hot spot for young people lured in by the artsy glow of the area’s bars and restaurants.

It’s a neighborhood rich in history that’s constantly changing face. The Domino Sugar refinery still looms along the East River, an abandoned relic of Williamsburg’s 19th Century industrial boom. Other factories have since transformed into hip, indie nightclubs fueling the neighborhood’s underground music scene. A shrinking subculture of hipsters still cling to the non-conformist attitudes first introduced to Williamsburg by an influx of artists who set up shop in the 1970s and left just as quickly in the 90s, no longer able to pay rising rents on their trendy brownstones.

Despite the mesh of cultures, the Hasids have managed to maintain a certain level of exclusivity, if only just barely. The Jewish community was one of the first ethnic sects to settle in Williamsburg, arriving in droves from Hungary and Romania following World War II. Today, it is the largest community of its kind in the world and continues to grow, though at a price — literally.

“You notice outside people coming in,” Wagmar said. “Prices are rising, and some people are moving to Manhattan or other places in Brooklyn to try to grab some better prices. It’s getting more expensive here.”

It’s getting more expensive everywhere — especially in Williamsburg. The Hasidic community is not the only group wary of encroaching commercial chains and shiny high-rise condominiums popping up in a neighborhood whose zoning laws once capped buildings at five stories. In 2009, the first Duane Reade to infiltrate Williamsburg opened on Kent Avenue and North Fifth Street, four blocks away from the locally-owned King’s Pharmacy. A CVS is expected to open along Kent Avenue later this year.

The roar of construction pierces the once-quiet sidewalks running through McCarren Park as developers move forward with plans to build a luxury hotel along North 12th Street between Bedford Avenue and Berry Street. Half-finished apartment complexes along the East River give the waterfront a new look that some fear will translate into a more overarching neighborhood makeover.

“The crowd here is going to change,” said Caren Becker, a 28-year-old Williamsburg resident. “All those construction sites that you see everywhere are going to change the picture so much.”

Becker moved to Williamsburg a year ago from Prospect Heights. An architect working in Manhattan, she was attracted to the area’s close proximity to the city. She said she is unsure how much longer she will stay.

“The house where I live, it’s mostly young professionals with high-paid jobs,” Becker said. “It’s no longer just artists with no money. That’s an issue for Williamsburg. People with money can afford to live here and are pushing the other ones away. It’s scary.”

Brian Lentini, a project manager with aptsandlofts.com, a Brooklyn-based real estate firm marketing many of the new high-end condo buildings, said the new developments are aimed at bringing in young families looking to escape Manhattan who no longer want to rent. He expects the new wave of homeowners to increase as more buildings are completed in the near future, despite the lofty $550,000 starting price accompanying most one-bedroom condos.

“A lot of people from Manhattan are coming here because it costs less and there is a cooler neighborhood vibe,” Lentini said. “There is a ton of people coming over. Here, there’s a more laid-back feel. They’re getting a better product.”

Young Jewish families are  increasingly moving to new housing developments going up along the Hasidic neighborhood’s eastern edge — an area Wagmar calls “New Williamsburg.” He moved his family there two years ago, no longer able to afford the rising cost of living in his community. He said despite increasing rents, most Hasids are reluctant to move from the area they’ve called home for more than 50 years.

“In all Jewish places and towns, there are very high prices,” Wagmar said. “It should push people out, but the fact is that most people are staying here, which actually makes it more expensive. If people started moving then business owners couldn’t keep prices so high. But because people are staying, prices are staying that way.”

Despite the financial challenges Hasids face in the wake of Williamsburg’s revived housing flux, Wagmar said he is most anxious about living in closer quarters with other Jewish families in his building — an inconvenience he said he didn’t have to worry about before coming to Williamsburg.

“When you live so close to each other, everyone knows what’s going on,” Wagmar said. “It’s a little more uncomfortable than in other neighborhoods where you’re living (your) life and no one knows everything going on behind your doors.”

Still, he said he does not see himself moving, nor does he fear his neighborhood’s values will be compromised by newcomers.

“Normally we are friendly to our neighbors,” Wagmar said. “The children are happy here. It’s a good place for them to grow up. People are moving out and others are moving in. The neighborhood is changing definitely, but the Jewish people are here to stay.”