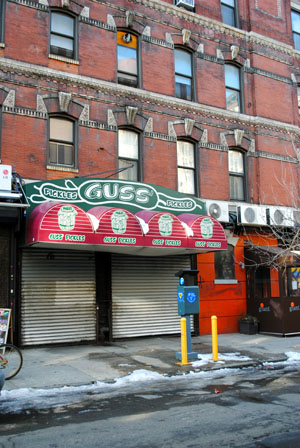 In the span of a few blocks of Manhattan’s Lower East Side, residents and visitors can find themselves sipping wine at a gallery opening, shopping for knockoff purses, touring historic tenement apartments, and ending up at high-end boutique or $3 dumpling shop.

More than any other neighborhood in New York City, the Lower East Side is known for it’s remarkable diversity and rich artistic culture. But now more than ever, store owners and residents fear that growing numbers of affluent middle-class transplants are threatening the area’s unique character.

“When I moved to the Lower East Side 20 years ago, it was the ruckus neighborhood,” said Steven “Sunshine” Potter, longtime resident and manager of the recently opened neighborhood joint Mikey’s Burgers. “Now it’s only a bland, watered-down version of what it used to be.” 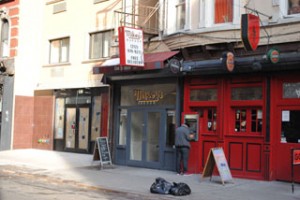 Mikey's Burger on the Lower East Side. Photo by Alexandra DiPalma

Just as the Lower East Side was transformed from immigrant neighborhood to counter-culture capital in the 1960s, the area has been going through another massive shift. Middle-class residential upgrades have pushed out artists and longtime businesses, such as Guss’ Pickles on Orchard Street near Delancey Street. The pickle shop has sold some of the city’s most renowned pickles for more than 89 years, when Polish immigrant Isidor Guss began selling his products out of a pushcart on the Lower East Side.

But in the beginning of this year, Guss’ finally buckled under the pressure of increasing rent prices. Owner Patricia Fairhurst decided to move from Orchard Street to Borough Park in Brooklyn.

“It’s gotten too expensive here,” said Fairhurst. “And we only have an outdoor storefront — we freeze standing out here in the winter.”

Steve Liebowitz, owner of United Pickle Enterprises based in the Bronx, is also sole owner of the Guss’ trademark and name. In a contentious court battle, Fairhurst lost all rights to use the name when she relocated. He believes that the Orchard Street Guss’ is moving to Brooklyn for another reason.

“They didn’t move to Brooklyn because of the rent prices or because of the neighborhood,” Liebowitz said. “When they stopped buying from us five years ago, the pickle quality slipped. That was the problem — they weren’t getting as much business.”

Whether the rent or the quality of their pickles drove them out of the Lower East Side, Guss’ did manage to hold on long enough to see the block change completely. Now, the neighborhood institution seems out of place.

Upscale boutiques and specialty shops — a spa frequented by celebs, a coffee shop that roasts its own beans, a shoe store that only sells items made from organic materials — have overshadowed the red pickle barrels that once crowded the narrow sidewalk.

Even though the pickle shop is moving to Brooklyn, 88 Orchard, the expensive café directly across from the old location, includes Guss’ famous half-sours with their $11 gourmet sandwiches.

“It’s really too bad that they’ve been pushed out,” said Soo Chin Han, 22, who has recently moved to Orchard Street from the Upper West Side. “Especially since yet another trendy hipster boutique will probably go in its place.”

While some residents are angered by the displacement of shops like Guss’, others are resigned to the fact that the neighborhood’s shifting landscape is inevitable.

“The Lower East Side might have held on to its identity for longer than other places, but everything is becoming gentrified in a sense,” Potter said. “People move down here and want to change it instead of embracing it.”

Potter, whose burger spot opened only a few months ago, is pleased with some of the changes.

“In the ’80s, there would be people partying and doing drugs and getting food at diners at 9 in the morning, not looking for the newest restaurants,” Potter said. “Now the Lower East Side food scene is a destination, which is great for us.”

The same influx of affluence that fuels the success of upscale restaurants is helping business for small boutiques in the area. While it’s still possible to buy a fake-leather coat off the street, the ‘bargain district’ title is becoming less and less appropriate as fashionable clothing stores displace old discount emporiums.

Isidoro A. Francisco, 29, is also happy with the way business is being affected. An employee at Yumi Kim, a designer boutique opened in 2008, he is still concerned that his clientele, among others, are taking away from the neighborhood’s distinct identity.

“People from the Upper East and Upper West Sides are moving down here and spending money because they think it’s the place to be,” Francisco said. “But now everyone who made the LES cool is moving out to Brooklyn.”
izzymp3
Isidoro A. Francisco on the changing Lower East Side

Francisco noted the arrested development of several hotels in the area, such as Hotel Ludlow and developer Morris Platt’s plan to build it at 180 Orchard St. Once these developments gather momentum, he said, Lower East Side culture will face a serious blow.

“The Lower East Side still has its edge, but it’s only a matter of time until it loses it,” he said.

Great article, hey I came across this story while surfing for music events. Thanks for sharing I’ll tell my friends about this too.

Hi, How is it going? I must say that i enjoy the unique source of content of your blog a great deal, can’t help wondering where you find all of it from. Best regards Ps3Ylodfix

I’m delighted! It’s refreshing to see someone very chuffed about what they do. Keep up the great work and I’ll return for more! Cheers!

Is this for real? So sad. Thanks a lot for the article. Nice post. Love to share this one.