Memories of stop and frisk, racial profiling and microaggressions drive activists to protest 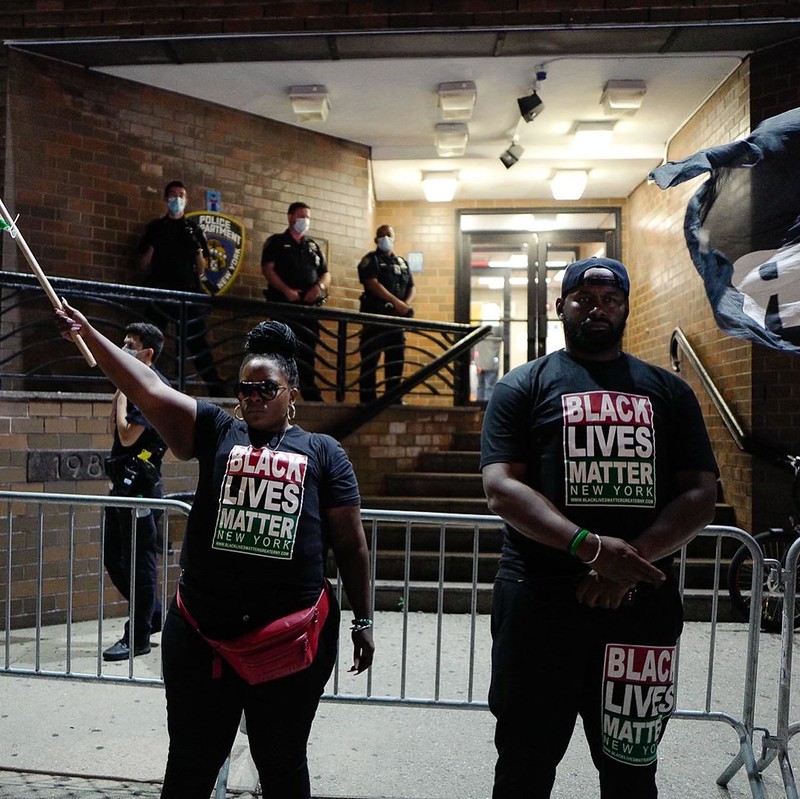 Chivona and Hawk Newsome stand in front of the 34th Precinct after a protest on September 12th, 2020. Photo by Sean Josahi Brown

Chivona Newsome was only 7-years old when she was stopped and frisked by police. The memory haunts her to this day.

“We were not treated as children…we were both children,” she said.

Newsome was with her then 14-year-old brother, Hawk Newsome. The pair was on their way home after picking up some groceries at their grandmother’s house when they were targeted by police, who padded down their pockets and searched their grocery bags

Newsome, 35, of the South Bronx, said that was her first experience with law enforcement and it was traumatic.

The feelings of  fear and trauma have never left her, she said.  As a black woman in America she said she is in constant danger of a police encounter that could go wrong.

“When we get pulled over in our  SUVs it’s like ‘will I make it home?, will they shoot me?’ It’s a protocol that I’ve practiced for years.” said Newsome. “Now when I get in the car and I’m getting pulled over for a cop to give us a ticket, I make sure I’m recording. I’m making sure I’m not moving around and my hands are stationary and this is a protocol.”

Microaggressions are also the norm for her. As a former financial advisor, Newsome received various comments from her white peers complimenting how she is “so well spoken” or “so articulate” as though black women are seen only through the lens of negative stereotypes.

“Sadly, racism is so ingrained in our society that I don’t think most of them are trying to be insulting at all,” said Newsome.

Knowing that she had to do something to fight institutionalized racism and other issues that overwhelmed her community. Chivona and her brother decided to organize  Black Lives Matters Greater New York.

The siblings were raised in a “militant household”  and Hawk Newsome  said  their parents, who met at a civil rights rally, taught them about the importance of standing up for their community.

He said while growing up not everyone could see the effects of racism first hand or understand how it affected communities of color, but now for younger generations, it’s the norm to be aware about these issues.

“You see things on your cell phone before they even hit the news,” said Newsome. “Those images you see are often revolutionary, they are exposing racism, they are exposing police brutality. Now we can expose individual acts of racism and we can go after the Karens of the world, but in the past we couldn’t do that.”

Both siblings are now dedicated activists, they have led hundreds of protests over the past five years in favor of racial equality and ending systematic racism.

Desi Smalls, a 24 year-old from Brooklyn, who has protested in New York City with the group, says the Trayvon Martin case made him understand the dangers he faced as a young black man.

“I remember being in junior high when it happened,” he said. “I will never forget the day that my mom explained to me that whole incident and how George Zimmerman was never held accountable for his actions and ever since then, I’ve been aware of my place in this country.”

For Smalls, living in New York  City has made him  feel safe to voice his opposition to racism. He believes the marchs will lead to change.

“Something will come from all of this. I definitely don’t feel like it’s all in vain,” he said.

Newsome believes that the protests will lead to the transformation the country needs. Recalling one of the chants used during their protests, she said,  “I believe we will win.”

Very good bebe you make me feel very proud to be your uncle .