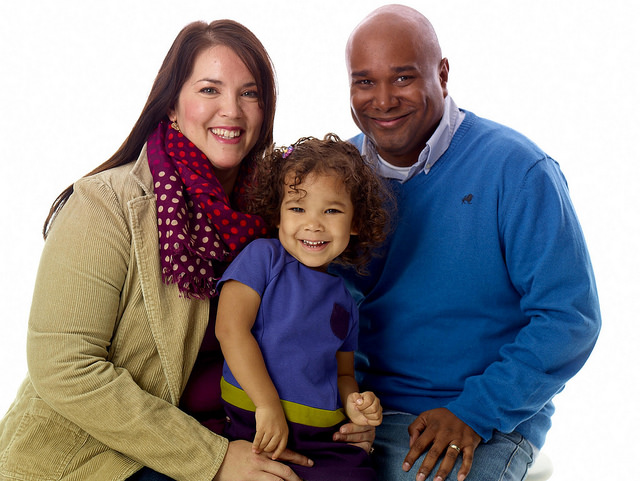 Christopher Persley with his wife, Jenelle, and his daughter, Camilla. Persley is a stay-at-home father who wants to spend as much time with his daughter as he can.

Christopher Persley woke up around 7 a.m. He got breakfast and lunch for his five-year-old daughter, Camilla, before she left for school. For the rest of the afternoon, Persley did dishes, finished laundry, cleaned the house, and squeezed in some reading and writing. Once his daughter got back from school they played, ate a home cooked meal, and started getting ready for bed.

It was a typical day for Persley, a stay-at-home father.

“I have a truly wonderful relationship with my daughter,” said Persley, 42, of the Upper West Side. “There is nothing more fulfilling than that. I get to be the one who picks her up from school, who helps her maturation, who supports her identity development.”

Since 1989, the number of fathers who stay at home with their children has nearly doubled, reaching its highest point at 2.2 million in 2010. The number of stay-at-home fathers who say the main reason for staying home is caring for their family has also grown significantly since 1989, increasing from 5 to 21 percent. 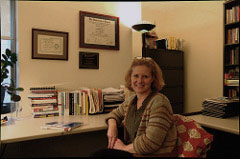 Dr. Caryn Medved sits in her office at Baruch College and explains her recent studies on stay-at-home fathers. Photo by Alex Zuccaro

Dr. Caryn Medved, Associate Professor of Communication Studies at Baruch College, did an in-depth study on stay-at-home fathers. Her inspiration for this study actually came up when her own brother became an at-home father.

Medved believed that one of the most important takeaways from her project was the establishment of parenting roles with at-home dads and breadwinning mothers was not just a result of economic issues.

“You read a lot in newspapers and things like that, that often times this arrangement is brought about because of economics,” she said. “But I was surprised at the number of couples who were there for all sorts of other reasons.”

Many couples also felt more comfortable with a parent staying at home with their children instead of using daycare facilities or hiring a nanny.

For the Persley family, Christopher and his wife, Jenelle, knew that they wanted someone within the family watching their daughter.

“I think our biggest fear was how much of an influence would someone else be on our child,” said Persley. “Would they stifle who she is and lead her to become someone who she’s not?”

Because his wife had stricter hours at the lab she worked at, it made more sense for Persley, who worked at an independent school, to transition into being the at-home parent. He had worked with kids for a long time at his school and was excited about filling that role

“Jenelle loved the idea of it being me,” he said. “She always felt that I was the parent better suited for that sort of extended time with our child.”

Once the couple officially made this decision, Persley told his supervisor that he was going to be leaving work to be a full-time dad. He was surprised to see that some of his co-workers weren’t as supportive of his decision as he thought they would be.

“There were some other people in the community that really didn’t get it, who thought that I was being fired saying, ‘There’s no way this guy is walking away from this job to be home with his kid,’” he said.

Persley also had trouble finding other stay-at-home fathers he could connect with.

Eventually, he found NYC Dads Group, a community of fathers who get together for playdates, classes and other social events

Medved discovered through interviewing her participants that these societal perceptions of the traditional male role does affect how stay-at-home fathers define themselves. Some of them own their title, but others get more insecure in certain social situations, like at a wife’s work party or an outing at the park.

“They might be at a party and someone asks, ‘So what do you do?’ And there certainly were plenty of men that I talked to that said, ‘Oh it depends on the day. Sometimes I’m a photographer,’ which is maybe a part time job or a hobby they do,” she said. “And sometimes they own it. But those kinds of situations are the most challenging for them.”

For breadwinning mothers, similar social situations can be challenging for them as well.

Cherry Vasquez, is a working mother of two. She currently lives with her husband, Jim, in Dallas, Texas.

When Vasquez first became pregnant at 21, she was making more money as a federal government worker than her husband, and that’s when they decided that he should be the at-home parent. Both Vasquez and her husband immigrated to the United States from the Philippines at a young age, and because of cultural differences, not all of the couple’s friends and family understand their household dynamic. Vasquez said that in traditional Philippine culture, the father is supposed to work and the mother is supposed to stay at home with the family. 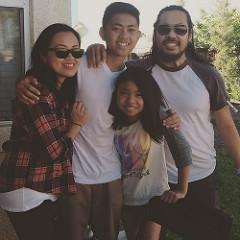 Cherry Vasquez with her husband and two children. As the working mother of the family, Vasquez has had to overcome scrutiny from friends and her parents who believe in a more traditional household environment.

That is why Vasquez’s mother envisioned a different life for her daughter.

“My dad always stayed home too,” said Vasquez. “My dad took care of me, so that’s not something new to me. But my mom would have preferred for that not to be my family situation as well, because she was the one working. I’m sure she was hoping that I would change things.”

But she knew that having her husband stay at home was the best decision for their children.

“They actually really appreciate having one of us stay home,” said Vasquez. “So like when dad asks, ‘Oh can I go back to work now? You guys are older.’ They say no.”

And Vasquez doesn’t mind coming home to a cooked meal and a clean house either, since it gives her more time to spend with her family.

“He takes care of cooking and takes the kids wherever they need to be and that way, when I’m off of work, I don’t have to worry about all of that,” she said. “I can just spend time with the kids once I get home.”

Although stay-at-home fathering is still viewed as ‘non-traditional,’ the increase of this family dynamic over the past decade indicates that it is becoming more socially accepted in society. Even big companies like Lego, have introduced a stay-at-home dad figure as part of the brand’s new Lego City line. And many stay-at-home fathers, like Persley just want people to realize that dads are parents too.

“Most of us want to be just as involved as moms in the raising of our children,” he said. “And a man can be an at-home parent just as easily as a woman.”

[…] “I have a truly wonderful relationship with my daughter. There is nothing more fulfilling than that. I get to be the one who picks her up from school, who helps her maturation, who supports her identity development,” he is quoted as staying in “More Dads Want to Stay at Home.” […]