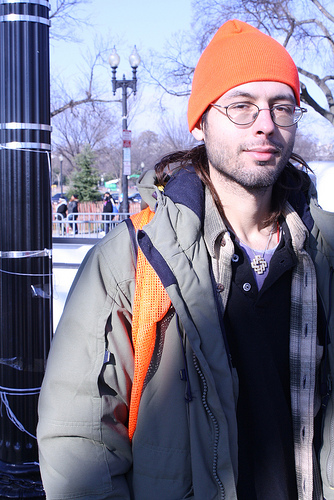 Mark Billings, 29, is a temporary sanitation worker hired for the inauguration. Photo by Alaia Howell

WASHINGTON, D.C-While pomp and circumstance was what brought many to Washington D.C., it was the plastic bottles, crumpled newspaper and unwanted mementos strewn across the National Mall lawn that brought Mark Billings, a temporary sanitation worker to the Inauguration.

The Baltimore native said that he had been to the city a few times, but this was his first attending the inauguration and only because he had trash to pick. His work consisted of collecting the mountains of trash left behind by the hundreds of thousands of people who attended today’s inauguration.
Although he enjoyed watching the festivities as a Native American is also reminded of the never-ending suffering of his people.

“It’s a good thing, but when I’m watching I can’t help but think of injustices that have not been righted and put into the background,” he said.

Billings, who said he is of Cherokee ancestry, felt as though the native people are continuing to be left out of the conversation.

Of the American Indians and Alaskan Natives that make up 1.7 percent of the U.S. population, 28.4 percent were living in poverty in 2010 according to the United States Census Bureau, in comparison to the 15.4 percent nationally. Quality of life on the reservations and employment continue to be issues that permeate throughout the community.

“There would be no United States without the native people,” he said. “If only people understood the depths of the genocide and thefts and lies that the government perpetrated.”

Billings, wore a bright orange vest and ski hat. He held a rake and trash bin in his each hand. But Billings is a scholar of sorts. He received his associate’s degree and likes to meditate and study linguistics in his spare time, gave his unique perspective on a subject that, much like his presence as a garbage collector, is often overlooked.

“We don’t talk about it,” he said. “But you need a Native American talking for native peoples just as you have an African American president talking for African American people. Otherwise there is no justice.”
And though he sees native peoples as being overlooked he is quick to say that he himself doesn’t feel disregarded—neither as a person of native descent or a garbage man.

“People were a lot nicer today for some reason,” he said with a slight grin.

In the past, Billings has been contracted to a number of temporary service and sanitation jobs, and definitely regards picking up garbage as the worst part of his job.

“If not disgusting, it’s symbolically representative of the things that people don’t want,” he said.

But despite his criticisms, he showed positive interest in the parts of President Obama’s speech that were audible from National Mall. Sound issues made it virtually impossible to hear it all.