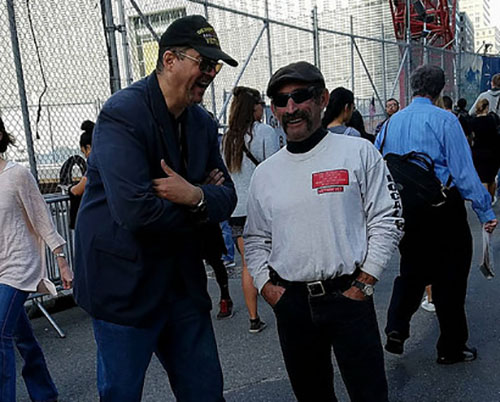 George Gagnon (right) and Joseph Rodriguez joke with each other as they pose near the Freedom Tower today. Both men volunteered at Ground Zero after the attacks. Photo by Amy Zahn

Just before 9 a.m. on the 16th anniversary of the September 11 attacks, George Gagnon and Joseph A. Rodriguez stood close on the corner of West Broadway and Vesey Street, heads together, talking like old friends.

Rodriguez adjusted his black Desert Storm Veteran cap. This morning was his first time visiting the site of the attacks on the anniversary. It was Gagnon’s 16th. He had gone every year without fail, through emphysema, a triple bypass, 18 artery stints and most recently, a heart surgery just two weeks before this year’s visit to Ground Zero.

But the pair weren’t old friends. They had met just minutes before.

“It was the day, the moment,” Rodriguez said about what brought them together. The two found common ground instantly. Both are war veterans — Rodriguez from the Persian Gulf, and Gagnon from Vietnam — and both showed up 16 years ago in the wake of the attacks’ devastation to help in any way they could.

Gagnon was an iron worker at the time, though he’s retired now. He recounted a story he had just told Rodriguez about cutting through steel to help pull people, living and deceased, from the rubble. One body, he said, was pinned down by a beam, her wedding band still on her finger.

“We spent three hours just getting that steel off so not to disturb the body,” Gannon said. “It was just doing what you had to do.”

Rodriguez nodded. The two stood close. An onlooker would not have known that, even an hour before, neither had known the other existed.

Rodriguez remembers the day vividly. He had planned on attending a job interview in one of the towers that day, realizing only while he was getting dressed, after seeing what his father was watching on TV, that he’d be heading downtown for a different reason.

Rodriguez lent his help for days, stopping only after he rushed to the Veterans’ Affairs hospital and discovered he had double pneumonia. He never followed up on his job lead, deciding it wasn’t meant to be. It was for a government job, he said.

Rodriguez would discover another personal connection to the attacks, months later. He was having breakfast at a diner near his home in the Bronx when he opened a newspaper and saw a memorial for a good friend from high school — Officer Jerome Dominguez, one of the 60 police officers who lost their lives that day.

“I just broke down like a baby,” he said. “That’s the reason why I’m here today, to honor him.”

“I think it’s our duty as Americans to come down here,” he said. There are only two places Gagnon makes it a point to go to every year: Washington D.C. over Memorial Day weekend, and Ground Zero on September 11.

The somber mood broke when Gagnon pulled out a black flip phone. Rodriguez, over a decade younger but a head taller, began dictating his phone number.

“We gotta go drinking one day,” Rodriguez said. Gagnon agreed. But first, Rodriguez wants to reflect — to honor the dead, the living, and the life he’s spent the last decade and a half making for himself.

As for their new friendship, Rodriguez said, it’s “to be continued.”