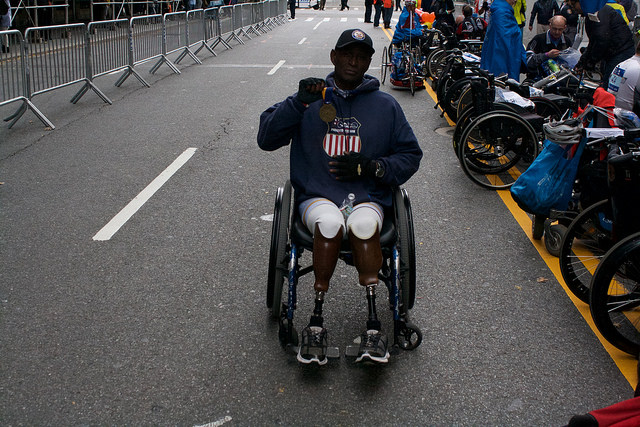 “I did it under two hours,” James Johnson, 60, said proudly as he held up his gold medal for the camera. “This was just an uplifting experience.”

The intersection of 72nd St. and Central Park West marked the finish line for racers competing in the wheelchair and Achilles Handcycle divisions of the 2015 New York City Marathon today, and the excitement in the air was palpable. Competitors were reunited with kisses, cheers, and balloons from loved ones as they crossed the finish line into the swarm of people waiting on the other side.

A former electronics technician for the U.S Navy, Johnson of Atlanta, Ga is a disabled veteran who was no stranger to the demands of a marathon, finishing the race with flying colors, as well as two prosthetic legs.

“I did the Marine Corps Marathon last week,” Johnson said. “I race with Paralyzed Veterans Racing Team, as well. It’s pretty much my passion, but I also like helping, like, other vets get involved and kids get involved in the sport.”

According to its website, the Paralyzed Veterans Racing Team assists disabled veterans with rehabilitation through competing at various cycling events and marathons across the country. Johnson is also involved in Achilles International, an organization that provides an environment of community and support to athletes with disabilities.

Johnson noted that prior to getting involved with adaptive sports, he “didn’t do anything but hang out at the bar” as he struggled to adjust to his new life.

But then he discovered adaptive racing.

Although Johnson does not adhere to any strict rules to prep himself for race day, he said that he typically makes an effort to eat healthy during the week, avoiding pork and beef while loading up on seafood and turkey products. Hydration is also key.

“I don’t drink during the race. I don’t take any fluids in,” he said. “So I try to stay hydrated up until the race, and you know, a couple days before go a little heavy on the hydration.”

One of the most rewarding aspects of racing to Johnson had been the people and friends who helped to coach, train, and inspire him along the way. As he spoke, he pointed out a handful of people around him who had made a difference in his life as a disabled veteran.

“Ever since I started, they’ve been helping me, coaching me,” he said. “I do go to training camps and I’ve been blessed to go to the Olympic Training Center in Colorado.

He said it won’t be his last New York City Marathon, and is planning to return. 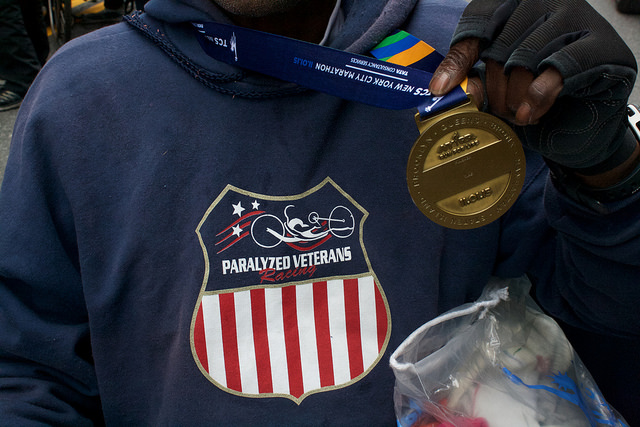 He gazed at the newly acquired medal hanging around his neck.

“This was just simply awesome.” Johnson said of the marathon. “That is all I can tell you.”