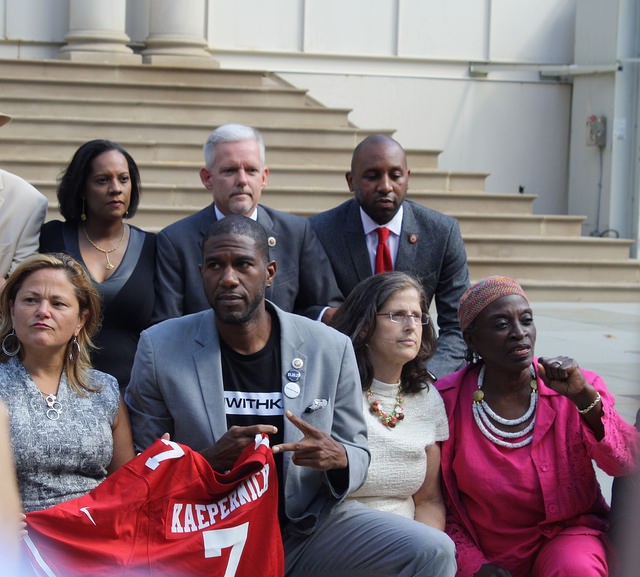 A group of NYC council members knelt on the steps of City Hall yesterday. The action was a show of solidarity with Colin Kaepernick and other NFL players who are protesting police brutality and racial injustice in America. Photo by Farnoush Amiri

Donning a black “IAmWithKap” t-shirt under a striped fitted blazer while holding up a red San Francisco 49ers jersey with Colin Kaepernick’s name and number inscribed on the back, Councilman Jumaane D. Williams (D-Brooklyn) led a group of council members in a “Kneel In” on the steps of City Hall yesterday  morning, just days after President Trump called out demonstrations in the NFL.

The group of about 15 city officials joined together to display unity against the president’s tweets, which called the action of kneeling during the presentation of the National Anthem a “disrespect of our country,” and suggested that the NFL owners should get any “son of a bitch,” who doesn’t stand off the field.

“This here today was a protest,” council member Inez Barron (D-Brooklyn) said. “It was perhaps silent but it speaks volume in the action we are taking.”

This form of protest began back in 2016, when Kaepernick chose to kneel during the National Anthem in protest of the recent rise of police brutality against African-Americans in the US. The now free agent became the league’s unofficial symbol for the cause for police reform and civil rights for minorities.

“Protesting is probably the most American thing that one can do,” Williams said. “It is in fact the only thing that has ever propelled this country to move forward. Everything we have enjoyed from this country has come from protesting.” 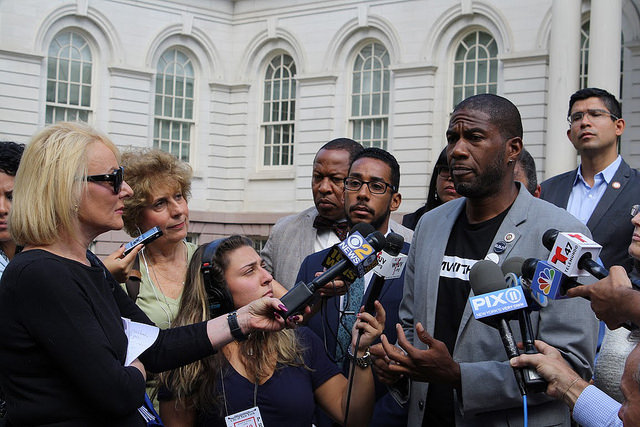 Jumaane Williams (D-Brooklyn) speaks to reporters about the importance of understanding the reasoning behind Colin Kaepernick and other NFL players protest and kneeling during the National Anthem. Photo by Farnoush Amiri

The city officials demonstrating the right to protest also brought light to the lack of attention the president is directing toward Puerto Rico in the aftermath of Hurricane Maria. They said  his focus on NFL players’ right to protest is a distraction from more pressing concerns. One council member even alluded to racism being the reason for the president’s hesitation to devote more attention to the Caribbean island.

“The struggle for racial justice, which we are honoring by taking a knee today, is not narrowing about policing because obviously we have systematic racism in our housing, segregation in schooling and now even in our hurricane relief response,” Councilman Brett Lander (D-Brooklyn) said.

Lander, along with Councilman Daniel Dromm (D-Queens,) were just a few of the leaders who showed support for their minority colleagues whose cause they said they are able to empathize with.

“I stand as an ally. Obviously I am not a person of color, but I feel that white people, myself included, need to stand up for this cause and need to remember how it all started, which is an action against police brutality and the experience that people of color experience, oftentimes at the hands of police,” Dromm said to the crowd outside City Hall.

Andy King (D-Bronx,) also believes that the president and others who are not directly affected have an obligation to the ones who are.

For African American councilmembers, this cause is a personal one, but they know that not unlike the dozens of other civil rights marches and causes that have occurred in this country, this one will also begin and end with the act of nonviolent protest.

“When this started months ago, many of us made it clear that this was not about the flag, this is not about patriotism,” Williams said. “This is about a system of supremacy, a system of oppressive policy that has been around a long time, and many people have tried to use patriotism to stop people from protesting and we’ve said that that will not last.”