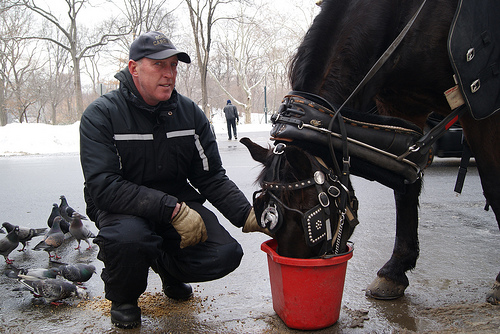 Clad in a thick snowsuit, Robert Boyle stood at the southwest corner of Central Park yesterday, adjusting the blanket and reins wrapped around his black horse, Lester. As he shooed away pigeons from Lester’s bucket of food, he asked chilly pedestrians if they would like a carriage ride. He said customers flock to the area after snowstorms for an idyllic view of the park.

“This time of year and the holidays you see more people here,” said Boyle, 46, a carriage operator who lives in New City, N.Y. “The cold doesn’t bother them, they come here expecting it.”

The National Weather Service predicts 5 to10 more inches of snow will fall on New York City by tomorrow morning— making this storm the third to hit the city since last month.

Despite the recent snowstorms, Boyle said he doesn’t expect business to suffer with today’s weather.

“Bring it on,” Boyle said of the snowfall. “Its only snow and you have to get by.”

Kieran Emanus, 39, a carriage operator in the same area, said he isn’t concerned about the snow but is worried about the low temperatures. If the air drops below 20 degrees, he is not allowed to take the horses out.

“I am constantly worried about the weather and watch the Weather Channel,” said Emanus, of Brooklyn, a full-time operator for 14 years. “You have to be hopeful.”

Emanus said there have been six days when it was too cold to work this winter. He could not speculate how much money he lost on those days, but said that he gives about three a rides a day and charges between $20 and $50 per ride.

“You can’t get frustrated,” Emanus said. “I just make sure my cable is working so I can watch television.”

Boyle agreed that low temperatures are the only hindrance for business in winter. He said that the horses are powerful enough to pull the carriages through the snow-covered streets and the city clears the roads before the day starts.

“People always ask if the horse’s feet get cold,” Boyle said. “They don’t have feet, they have hooves, and they are wearing steel horseshoes. They are perfect for this.”

Jenny Rafter, a 31-year-old tourist from Ireland, said she wanted to take a carriage ride in the snow-covered park because it was too cold to walk and she enjoys the view.

“I wanted to see New York in the snow,” she said after finishing her carriage ride through Central Park with her husband. “I love it. Its magical.”

Boyle said that despite the chilly temperatures outside, passengers keep warm without lots of gear.

“Some people use the blankets,” he said. “But the romantics use body heat.”

Our temps here in Philly are 26 w windchill so we drivers miss way more days than you guys .And we don’t get as many tourists this time of year . Been doin it since 1991 though cause I love the horses !

It’s all about the money for the drivers. How sad.

Yes, Anne, it is ALL about the money. To the industry (which in NYC is cash only–I guess the IRS doesn’t give a damn, either) the horses are inanimate objects to be exploited. When the profit margin slips, off the horses go. And I don’t mean to a grassy farm in la-la land.

New York City carriage drivers and owners routinely break the law, with the blessing of the city government. Thus, the mayor, the city council, the departments of Health and Consumer Affairs are all implicated in these crimes. Sadly, no one cares because the corruption in NYC government runs so deep that this is the tip of the iceberg.

ann & mary at best you misinformed at worst just crotchety zealots.
The Horse require regular exercise or they get of out shape very quick and can “tie-up”, they all have mandatory 5 week annual farm sabbaticals, with most getting months not weeks when they are rotated on and off their respective farms. I suggest you direct your attention to the 38,000+ horses & burros in the wild in western states like Nevada that State officials want to “cull” by 12,000, or perhaps the last herds of wild horses in Corolla North Carolina’s outer banks that they want to “thin Out”.
http://www.foxnews.com/us/2010/09/20/wild-horses-north-carolina-western-states-face-uncertain-future/
Also, ten of thousands of Horses being abandoned and shipped to slaughter in these tough economic times because daddy wants to keep his nice car or boat now that he’s feeling the financial pinch and cannot afford little Darlings Pony Club lessons and Stabling associated fees.
A working Horse is a cared for horse and a lucky horse in todays economy.
In the wild they only average 7 years life span, stabled horses easily hit their 20’s and beyond.
You could also put your money where your mouth is and buy a horse and pay its upkeep. Talk is cheap. Caring for and maintaining a horse is not.
But why let the facts get in the way of your uninformed ignorant opinions.
Real Horse people see through your fantasy world and slanderous assertions.
Going through life ignorant and bitter is life’s own reward to you misguided souls.

In Ireland horses are being abandoned all over the country because irresponsible people do not have either the space, time or money to look after them. It is disgusting. At least the carriage horses are in stables at night, being fed and groomed daily. Horses are a working animal they need exercise. It would be cruel to keep them stabled because of the weather. Would you like them to be kept in for the summer too because it gets HOT!!!

[…] Despite the cold, carriage rides continue in Central Park […]