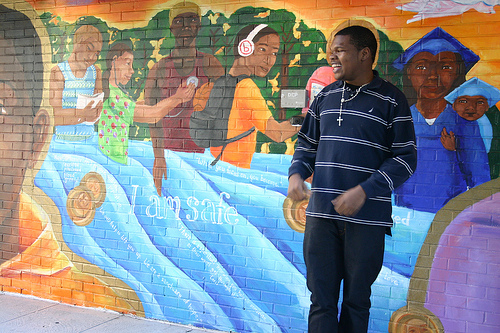 Standing on a corner in Hell’s Kitchen smoking a cigarette, Kelron McJunkin looked more like a college kid than a homeless kid. Wearing leather Dr. Martins, a polo shirt and crisp jeans, he waited on a callback for a part-time position at Duane Reade. He’s worked a number of temporary jobs over the past six months while living at Covenant House. As one of the few homeless youth shelters in Manhattan, it requires residents to actively pursue employment.

“They help you out, they do your resume, but basically you gotta do it for yourself,” he said, “It’s like the saying, ‘you can’t help somebody who doesn’t want to help themselves.’”

McJunkin, is a part of a record high population of homeless youth in New York City. These youth continue to function in society, hiding the issue of their homelessness to the outside world. But more than 21,000 children slept in shelters in January 2013, an uptick of 22% from the same time last year.

Covenant House of New York at 41st Street and 10th Avenue is a decades old shelter that serves homeless youth in New York City. Alice Steigerwald, Deputy Director of Crisis, said the issue of young homelessness is often overlooked because it isn’t visible.

Steigerwalds on who these youths are and why they wind up in the streets.
Audio Clip 1

McJunkin first arrived at the doors of Covenant House in the summer of 2012, after years of turmoil.
When he was 14, his father died of lung cancer. He never truly knew his mother, who was an HIV positive drug addict, and became a ward of the state. At 16, he began living with his sister, but after learning of the death of his mother, he stopped minding his sister and was kicked out. From there, McJunkin moved to Philadelphia to live with an aunt who kicked him out once his father’s social security benefits checks stopped. McJunkin said he spent about three weeks on the street.

“It was hard, but it wasn’t that bad because I know other kids that are really homeless, said McJunkin, “They really slept in the streets all night and had no place to go, no friend’s house, no parents, no family. So I feel they lived worse than I did.”

McJunkin would walk around for hours to avoid sleeping on the street. During the day, he would visit with friends to eat and take showers. Eventually, McJunkin and a friend began stealing cars and selling the parts, which allowed the two to afford an apartment together.

McJunkin on his life on the streets.
Audio Clip 2

Last year, he decided he didn’t want to live as a criminal anymore, and moved back to New York. When he found himself at the doors of Covenant House, Steigerwald and her team were able to house him in one of their 108 beds. She said stories like McJunkin’s are all too familiar.

“The typical kid, they don’t sleep at night, they come and they sleep at our drop in center during the day,” said Steigerwald. “Even if they’re not living here, we give them two meals a day.”

While Covenant House had space for McJunkin, thousands of other homeless youth are turned away each night throughout the city. Giselle Routhier, a policy analyst for Coalition for the Homeless, said there are only about 250 beds for unaccompanied homeless youth like McJunkin in the city. These youth face a unique set of issues.

“That population is highly vulnerable,” said Routhier. “They don’t feel safe within the regular shelter system, so often times [they] will cycle in and out of the youth shelter system whenever they are able to get a bed.”
Covenant House can hold up to 160 residents, but had to downsize due to “financial contingencies”. From 2010 to 2011, Covenant House received about $60,000 less in federal, state, and city funding. At the same time, homelessness continues to rise, 55,000 New Yorkers slept in shelters last month—the highest number since the Great Depression.

Routhier said the rise can be tied to the end of permanent housing assistance for homeless families which lead to a revolving door trend in shelters.

“We now have over 60 percent of families that are entering shelters have been homeless before,” said Routhier. “Prior to 2005, that number was 25 percent. There’s a huge increase of families experiencing repeat episodes of homelessness.”

At Covenant House, residents can stay for one to two months. Steigerwald said it usually takes three to four stays for homeless youth to leave the system.

McJunkin hopes to begin renting an apartment when his current stay at Covenant House ends. After receiving his GED, he plans to attend business school.

“I want to own a business. Something I can call my own, so I would be able to pass it down to my family, so they won’t have to worry about, how to get money or how to survive,” he said.
For McJunkin and the youth like him, record homelessness in New York City is not merely a statistic but a harsh reality.

“Unfortunately, they’re teenagers that have adult problems,” said Steigerwald. “They’re just like us and are fighting for everything they have. They’re fighting for a place to sleep tonight.”