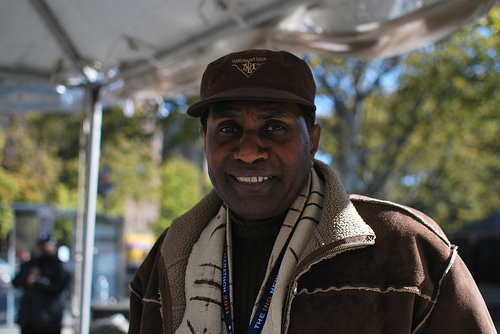 Claude Jay, a Harlem-based performer and business owner, acted as emcee of the Gospel Station singing and welcoming runners into the 21st mile of the race. Photo byJoann Pan

Long-distance runner and ING NYC Marathon’s top female finisher Firehiwot Dado turned onto Broadway in a blaze of red causing Harlem to come alive in the roaring of cheers and slapping of thunder sticks, welcoming the first stream of runners to the race’s homestretch.

“You can do it,” the soulful voice of Claude Jay said, rolling over the crowd’s applause. “Harlem congratulates you.”

With his mouth to the microphone, Jay’s was the first voice the athletes heard upon entering the Harlem Miles—mile markers 21 to 23.

On the corner of 135th Street and 5th Avenue, life-long singer and Harlem-based business owner Jay sang a gospel song, “Mighty Mighty Mighty God,” interrupting himself several times to cheer on the athletes.

“Congratulations. Welcome to the Harlem Miles,” Jay shouted, as Dado ran down Broadway with police escorts on motorcycles as the first woman to enter Harlem and eventually win the 2011 ING New York City Marathon. 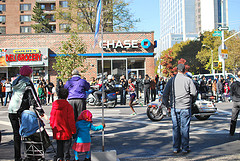 Harlem has always had great energy and presence at the marathon, according to Jay who has been coming to this race “since they started it” in 1970.

This morning’s crowd is a mix of children, parents and the neighborhood’s senior citizens with walkers or sitting in automated wheelchairs.

“The energy is so exciting. Harlem is a big part of New York City,” he said. Crowds lined the sidewalks on 5th Avenue from 135th to 125th Streets, prepared to cheer on about 50,000 runners to follow the pack leaders.

“This is awesome,” Jay said. “This is a Gospel stage. It’s like a sermon in motion because the will and the determination you see here today. It’s an honor to welcome them into Harlem, to New York, to Manhattan.”

Jay is no runner and doesn’t have the urge to give the marathon a try, he will always be on the sidelines welcoming runners to Harlem.

“The best part of this is watching the people on the sidelines and kids respond.” he said. “People really leave here inspired.”

The NYC Marathon is a great event in and for New York City. I am honored to have been a part for several years singing gospel and inspiration music an serving as MC of the Harlem Miles of the marathon. It is exciting and a blessing. It is a sermon in motion, demonstrationg the will and determination or the runners, and support of New Yorker; all working together.