NYC Marathon: Bundled up and waiting 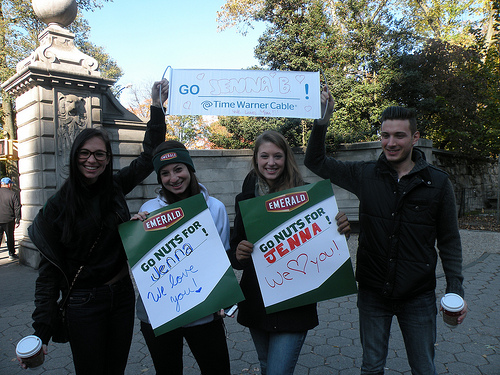 Since nine this morning, the Bernstein family was set up on the corner East 90th Street and Fifth Avenue, waiting to cheer on their favorite 2011 ING New York City Marathon runner, Jenna Bernstein, a first time runner enter the park .

“It’s the home stretch, there’s only a few miles left after this,” Joel Bernstein, Jenna’s father said. When the runners enter the park, they are around mile 24 and have about two and half more left till the finish line.

The family bundled up all morning with hot chocolate and fleece headbands to stay warm. They sat in portable fold-up chairs and made signs donning the phrase, “Go Jenna, we love you.”

As the time passed and the temperature began to rise, so did their anticipation to see Jenna enter into the park for the final push of the race.

“Good Form! Keep it up. You’re almost there,” Joel shouted to the runners as they entered the park. Beginning with the wheel chair division, participants came racing by in streams.

The family was able to track Jenna’s location on the course using Jillian’s iPhone app and the, “track my runners,” option on the ING marathon website. Jillian checked her phone all morning long to keep the family updated with her sister’s progress.

Jenna, 22, has run in a few marathons before, but never one with so many spectators, Linda said.

“She’s so excited,” Linda said. “It’s like always towards the end there’s lots of people, but not the whole way,” she said of other marathons her daughter has run in.

She also competed in the “Tough Mudder” event in May at Mt. Snow in Vermont, in which participants must go through obstacles like a pit of fire and ice cold water, as well as carrying large logs while they run.

“I was scared for her,” Joel said. But her family said it was right up Jenna’s alley.

“She’s intense,” her mother said with a laugh.

Jenna graduated from Cornell University and is in her second year of medical school at University of Connecticut. Alyse Bondi, Jenna’s close friend from Cornell, said Jenna loves to run.

Bondi, 23, lives in the Upper East Side and came to root for Jenna.

“Oh my god, Jenna’s kicking a**!” Bondi said as she checked Jenna’s location from her phone.

Around 1 p.m., the sun shone through the trees and leaves crinkled under huge crowds of runners’ feet. The family geared up to see Jenna.

“I’m like so anxious,” Bondi said. The group worried they might miss her in a huge cluster of runners.

When they finally spotted Jenna come around the corner, they went wild, waving their signs and shouting, “Go Jenna, You can do it,” as she dashed by in a large crowd.

While watching runners pass, the family saw a young woman whiz by in a, “Wonder Woman,” costume. They pointed it out and laughed happily.

“They’re all wonder women today,” Linda said with a smile.

Great article Nicole. Thanks so much for taking an interest in Jenna and us. Your words really captured the spirit of our day.

Thank you Joel, it was a pleasure meeting you guys, I had a blast!