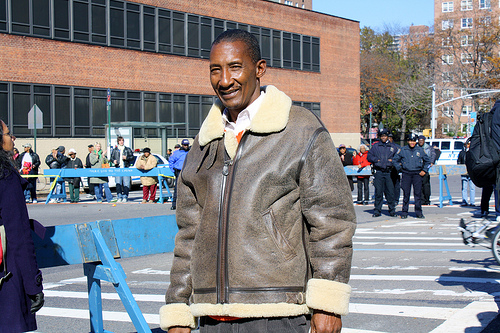 Right off the Madison Avenue bridge at 138th street in Harlem, a different type of record holder is celebrating with the hundreds of people cheering the New York City Marathon runners and dancing to the music of Arrow’s “Feeling Hot, Hot, Hot.”

Ernest Conner, 66, set the first World Record for running a the marathon backwards, in 1980 and he did it in the New York City Marathon.

A tall, distinguished-looking, athletic man, he wore a brown leather Panama hat and a suede jacket to cheer and celebrate.

“I drove here to celebrate my 30th anniversary of my world record,” said Connor, now of Atlantic City. “I was born and raised in Harlem, so watching these runners getting off the bridge into the neighborhood makes me proud.”

Conner knows what it feels like to get off the Madison Avenue Bridge while running.

“When you come off that Bridge all way to 125th Street, it’s all about spirit, music and people cheering,” he said.

According to Conner, Harlem is a unique piece of real state, and when runners get to the Harlem mile, they get more motivated by the music, the crowd and the chanting.

“I still remember people shouting, ‘Go, Ernest! Don’t give up,’ ” he said.

His first marathon was in 1978, when he finished in three hours and 33 minutes. After that, Conner kept on practicing, running and competing.

But in 1980, representing a Harlem organization called “The Tree of Life,” he set the world record for running backwards.

He completed it in five hours and 11 minutes.

At the time, it was a great accomplishment for him and for Harlem.

“We had air time on TV, and news on The New York Times, The Daily News and on The Post,” he said.

He had advice for aspiring marathoners.

You are a great inspiration in my life. May God bless &I keep you safe, healthy &happy running. Love, Jua

You are truly an inspiration! Was proud then and still proud of your accomplishment. Funny, you are still active and can physically outdo some peeps in my generation and younger, lol. Keep up the good health practices! Glad to be your neice!

Hey Ernest. Congrats on all your accomplishments. We knew you were a shining star. Thanks for being such a fun and kind man. Flo and Sharon LS410

I met Ernest in person. He is a true gentleman and an inspiration for us all. I was a runner and a triathlete.
We share our “war” stories. He is a pleasure to talk to and
I am proud to call him “friend”

My husband Eugene and I had breakfast with Ernest on Oct 31, 2017, and he is now 74 and is still in great physical shape. He is thoughtful, kind, sensitive, and has some of the best “life sayings” you can imagine. He respects the life God has given him.

Earnest and I both resided, 2340 7th Avenue Harlem USA. We lived a life of history making. Earnest was one of the history makers. We are very proud of this incredible young man.

My name is Cynthia Walker. I worked with Ernest in 1983 at a company “CHS Planning and Design.” Ernest was one of the most kindest, fun, loving, and giving persons you could ever know. If the world had more people like him, “what a wonderful world this would be.” I lost touch with Ernest and always wondered what happened to him. I remembered he was famous for running backwards, and that he was from Atlantic City NJ. When I found this article on the Internet and saw his picture, “oh what a happy feeling.” Ernest, if you read this, I would love to say hello. I never forgot your kindness. You can respond to my email address. A friend from the past, Cynthia