Ernes Connor, 77, the man who set the first world record in running marathon backward 41 years ago at the NYC Marathon. He came to cheer this year’s racers to the Madison Avenue Bridge in Harlem. November 7, 2021. Photo by Nikol Mudrová

Ernest Connor, the first world record holder for running the marathon backward in New York in 1980 was cheering Marathon runners again in Harlem near the Madison Avenue Bridge.

“This race has always motivated me to get back to the gym and train myself for the next spring,” 77 years-old Connor said while awaiting elite runners who were about to enter Harlem in just a few minutes. 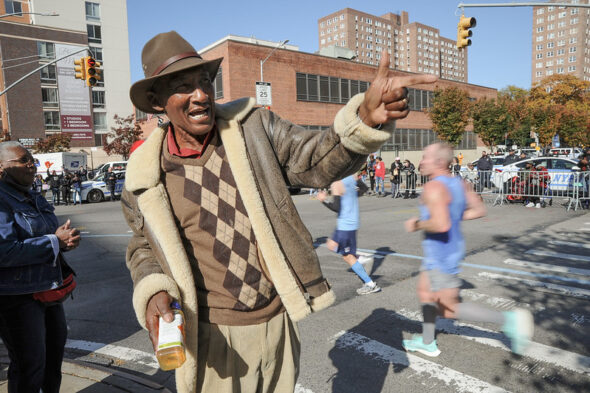 Ernes Connor welcoming runners at the end of Madison Avenue Bridge in Harlem to their 21st mile milestone. November 7, 2021. Photo by Nikol Mudrová

And sure, he celebrated. He danced like he was still a young man as the first runners crossed the bridge after 11 a.m.

“I used to say to them, ‘Welcome to Harlem.’ When I am here, I know I can make it,” Connor said while he clapped his hands.

Running a marathon provided him the understanding of how simple life really is and that he does not need to be intimidated about anything. Running a 26.2 mile marathon backwards is not a common feat, but Connor said there was a point to doing it this way.

“I wanted to be able to present myself as being a master of self-discipline, self-motivation, determination, and purpose,” Connor said.

He finished the race in five hours and 11 minutes and ran for the organization, The Tree of Life, which taught him about universal knowledge.

“It took all my boundaries off, and I felt like I could do anything,” he said. 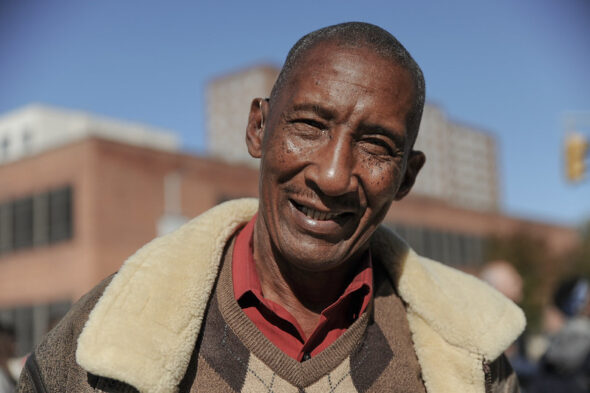 “When I started running, I was living deep in a ghetto in the Bronx,” Connor said.

Today, he lives on the water in Atlantic City, which he considers a dream come true.

“Not only did I run out of the ghetto, but I also ran the ghetto out of me,” he said.

Now, his purpose is to create a better quality of life for young people, which he is working on in Atlantic City-based project called Full Circle Family Entertainment.

But since he cannot run those far distances because of his knees anymore, he keeps himself fit by roller-skating with his grandchild and riding a bicycle on the Atlantic City boardwalk.

And as he learned around midday, that Kenya’s competitors Albert Korir and Peres Jepchirchir won both men’s and women’s races, he laughed. “Kenya took it again. You can only run around the corner, and they have already finished.”