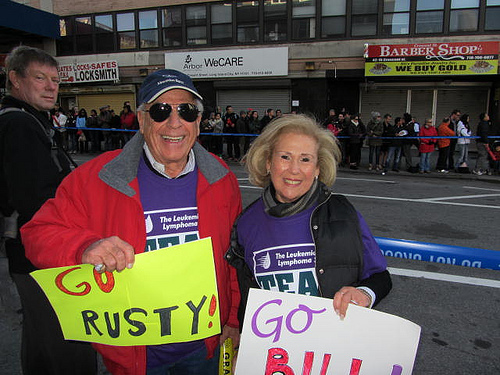 Jack, left, and Barbara Solomon stand along Crescent Street in Queens, waiting for their son Bill, a first-time marathoner at age 50. Photo by Chris Palmer

Standing in the shadow of the 59th Street Bridge in Queens, Jack and Barbara Solomon clapped thundersticks and danced to live music, soaking in the vibrant atmosphere of the ING New York City Marathon while waiting for their son Bill to run up Crescent Street.

“This is fabulous,” Jack said.

“It’s the experience of a lifetime,” said Barbara.

The pair stood among a modest but growing crowd this morning, cheering on wheelchair competitors and the earliest female runners before the race reached fever pitch across the river in Manhattan.

“We’re just caught up in the excitement,” Barbara said.

And they had good reason to be.

The Solomons said their son, who turned 50 this year, was running in his first marathon. They drove into the city from their home in Lido Beach, Long Island to catch a glimpse of him passing by in Queens. They planned to drive over to Central Park later in the afternoon to watch him cross the finish line.

“That will be a challenge,” Jack said with a smile.

The real challenge was keeping their nerve while waiting for their son to run by. Barbara said they have watched their niece, an eight-time marathon runner, compete in this race before. But there was a different sense of anxiety waiting for her son, and she noted that he ran into some difficulties while training.

“I’m worried about his knees,” she said.

Despite her concerns, though, both she and Jack expressed a great deal of pride in their first-time marathoner. They said he had raised several thousand dollars for Team in Training, a national fundraiser for the Leukemia and Lymphoma Society, and even with his sore knees and relative lack of experience in competitive running, they had no doubt he would cross the finish line in Central Park.