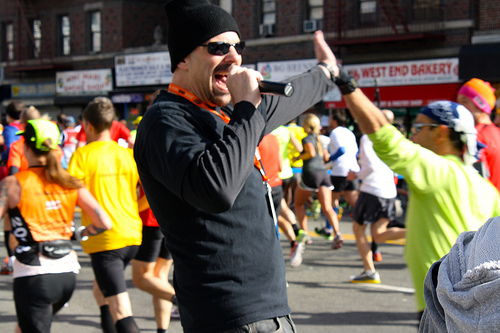 Marathon runners passing the 4th avenue and 88th Street corner in Bay Ridge, Brooklyn threw up rock-out symbols, air guitars, and even stopped to dance to the ripping tunes of rock-and-roll street band, The Third Rail.

The four Bay Ridge locals of The Third Rail have become friendly faces to locals and marathon runners alike, now playing for the third year in the New York City Marathon, with 4th avenue and 88th Street becoming their official stomping grounds.

Guitarist Matt Daus, 45, put on an “electrified” show, slinging his guitar behind his head to jam out the chords of Metallica’s “Enter Sandman”, and pay homage to the Bay Ridge music community he calls home.

“We have a lot of local people we know and they know us back from playing in the 80’s and 90’s to playing The Third Avenue festival every year,” said Daus, “Bay Ridge is one of the last true communities in the city of New York.”

Drummer Derek Rushton, 44, threw his drum sticks into the air in between bashing his drum set to Led Zeppelin, hoping his co-workers running in the marathon caught his beats.

Named after the third rail in the subway, the band has been playing for 25 years. Starting as a home band in the basement of guitarist and bass players Matt and Paul Daus, the band began opening for Brooklyn rock bands in the 80’s and 90’s. Of all the arenas they’ve performed, the New York City Marathon is the most captivating.

Paul Daus, 42, feeds off the energy of the Bay Ridge marathon audience, which he said has made playing music after 25 years worthwhile.

“When the audience gets involved, you get an adrenaline kick,” said Paul Daus, “That’s the exciting part about it, when you have somebody coming and saying ‘wow you sound really good’ it makes you feel good, and all the time you spend rehearsing or in your room playing guitar for hours on end actually pays off.”

For Matt Daus and lead singer Rob Delcastillo, 47, the combination of the audience interaction and the event itself is an invigorating experience.

“Here you’re one with the people and you’re part of a bigger event, an ancillary part of it where as when you’re on stage, everybody is looking at you as the event,” said Matt Daus. 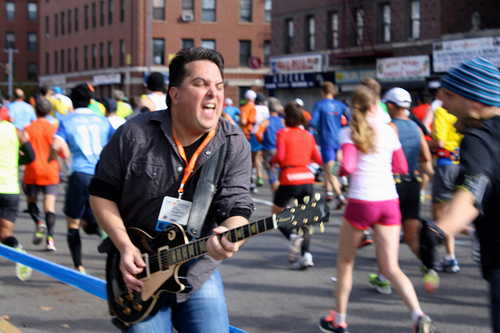 The audience is just as much a part of the band as the members themselves.

“We have an open door policy,” said Delcastillo. “Anybody who wants to come and be part of the show, it’s more than fine.”

The lively interaction goes both ways. With wireless capabilities, the band members sailed into the marathon crowd and got spectators to sing on the microphone.

While tighter security measures this year meant ropes guarding the band off, that did not stop them from getting up close with runners and onlookers alike, jutting their hands out to high-five runners and drawing their legs over the ropes to rip guitar shreds as close as possible to the action.

“I saw the bands playing there and said, ‘we’ve got to do this one day,” said Daus.

For DelCastillo and Paul Daus, running the marathon was always a goal. 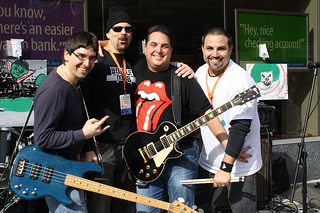 “I was very much into running when I was younger and it’s always something I wanted to do but never got the chance,” said Daus. “Now my knees are shot and I don’t think I can.”

While bad knees made participating in the event difficult, the band members paved their own way into the event, showing that no matter the age, you can still rock out.

“I was cursed to have the knees of a 90 year old man afflicted with arthritis, but I’m lucky and blessed to have the lungs of an athlete,” said Delcastillo. He gripped the microphone before getting back to belting Freddie Mercury’s “Another One Bites the Dust”.

by Megan Jamerson and Neil Giardino Staten Island is only a short ferry ride south of Manhattan, but when it […] 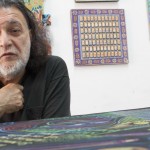 With rising rents, the cultural center is about to be driven out of the area.

How about those 40 women drummers druming about 10 blocks away from these guys who met the runners as they came off the bridge?? First time musicians for the marathon!
http://www.batalanyc.com