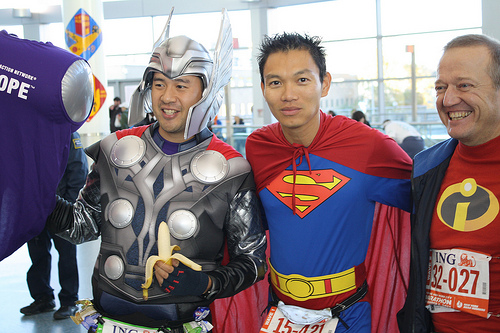 Hideki Kinoshita (left) and Steve Shannon (right) pose for pictures for fellow runners on their way to board the Staten Island Ferry to reach the start of the 2011 ING New York City Marathon. Photo by Eric Zerkel

With an estimated 50,000-registered runners, blending in at the New York City Marathon is far too easy. Ordinary runners don sneakers and other athletic garb with the extraordinary hope of completing the 26.2-mile feat. But ordinary just isn’t the Marathon Maniacs.

Surrounded by thousands of other prospective runners waiting to board the Staten Island Ferry to reach the start of the race, the small, close-knit group of five runners stood clad head to toe in superhero costumes.

This makeshift league of justice doesn’t jump tall buildings in a single bound, or even save heroines in distress, but accomplishes an even more incredible feat, running marathons—lots of them.

“I’ve been running marathons every week, consecutively, since August,” Kinoshita said. “My goal is to run 100 marathons and at least one marathon in all 50 states. It’s just one big party that lasts for four or five hours. It’s addicting.”

But Kinioshita isn’t the only one with this running affliction. In fact, Kinoshita’s resume pales in comparison to some of the other members of Marathon Maniacs.

The club features a tiered membership, which, at the lowest level, requires the completion of two marathons within 16 days, and stretches to “titanium level,” which requires a modest 52 marathons over a year span.

The members who run the most marathons in a one-year span, are dubbed, “Maniac of the Year,” with last year’s winners completing 106 marathons, or 2,777.2 miles.

Kinoshita said the club has over 4,500 members and has allowed him to meet individuals scattered across the country.

“We travel all over the country together,” said Kinoshita. “I’ve found hundreds of friends through the Maniacs. It’s been great.”

And while Shannon has gone at a slower pace than Kinoshita, racking up 49 marathons since his first in 1998, he says the group of marathon pros has to find ways to switch things up.

“I said, what the heck, I’ve run 49 marathons and I’ve never ran one dressed in costume,” Shannon said. “I’m young, well at least I’d like to think I am, and I’m only going to live once, so I went for it.”

Despite their antics and endless accolades the Maniacs know exactly what keeps them running back for more.

“Crossing the finish line is pretty sweet,” Shannon said. “But it’s not really about the destination; it’s about the journey. Absorbing the crowds and the energy from all the people around you, that’s what it’s all about.”