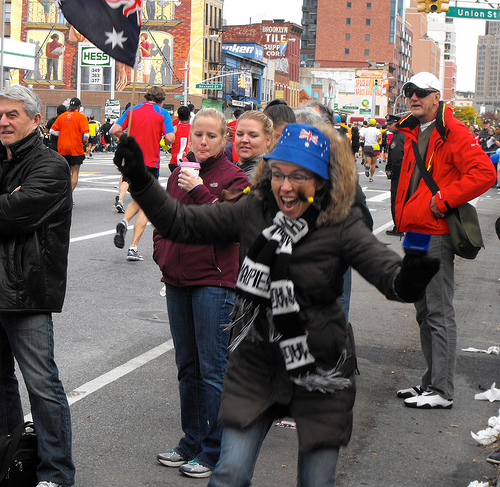 Jennifer Henry, 46 of Park Slope, cheers in joy after she runs a few steps with a fellow “Ausie.” Photo by Reuben Jones 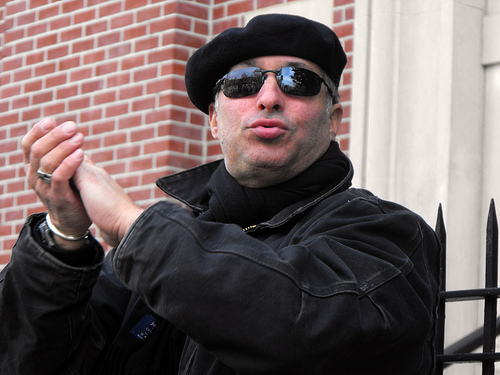 Christopher Neal Rommelmann, 50 of Brooklyn Heights, cheers on runners alongside mile eight of the course at the NYC Marathon. Photo by Reuben Jones

Bundled up in a scarf, jacket and black beret Christopher Neal Rommelmann, 50 of Brooklyn Heights, took the job of cheering on runners in the NYC City Marathon pretty seriously. He’s run 20 marathons all over the world, but a recent injury sidelined him today.

Standing alongside mile eight of the course, near Park Slope, Rommelmann said this is the part of the race where runners start to lose some of the initial nervousness and begin to start “hitting their stride.”

According to Rommelmann, the hardest part of the race is the beginning, but the end result is very rewarding.

“It’s euphoric, you feel like you can do anything,” Rommelmann said, “[You feel like] all the other problems in life you can conquer.”

Rommelmann said this year’s run is special because of the recent memories of the Boston Marathon bombing.

“Everybody is all in support because of Boston,” said Rommelmann, “We will bend, we will not break.”

The NYPD beefed up security for the race this year after the Boston Marathon bombing last April that killed three people and injured over 250 . Police used baggage screenings, helicopters, surveillance cameras and bomb-sniffing dogs to make sure the 26-mile race that featured more than 47,000 runners went smoothly.

Rommelmann said for people watching, the marathon is an experience that should not be missed.

“You gotta bundle up a little bit, but it’s so worth it,” he said.

Jennifer Henry, 46 of Park Slope, cheers in joy after she runs a few steps with a fellow “Aussie.” Photo by Reuben Jones

The screams of “Aussie, Aussie, Aussie!” from Jennifer Henry aren’t hard to hear even over the band, the voices of the crowd and the runners’ footsteps hitting the ground one by one.

Henry, 46, has been a resident of Park Slope for five years, but it’s clear she hasn’t forgotten where she is from.

Decked out in an Australian hat and holding high her home country’s flag, Henry said one of the reasons she comes to watch the New York City Marathon is to support her compatriots.

“Thought it might be nice for them [Australians] to see something they recognize,” said Henry, “They will see the flag and find me.”

It wasn’t hard for runners to spot or hear Henry. As one runner passed, she joined him for a few strides down the street and let him knew loudly there was another Australian in the crowd.

Henry, who works for a scientific non-profit and came to the United States because of her job, said she has never run the race, but the joy for her is watching those people who might be running their first or last marathon.

“You can see all walks of life going past,” Henry said, “Inspiring to see people who have had a journey.”
She was referring to those runners in the race who might have or are overcoming injuries.

Henry said she had not missed a race since she moved to the States and is motivated by wanting to help those runners that need more support.

“Makes me feel good,” she said.