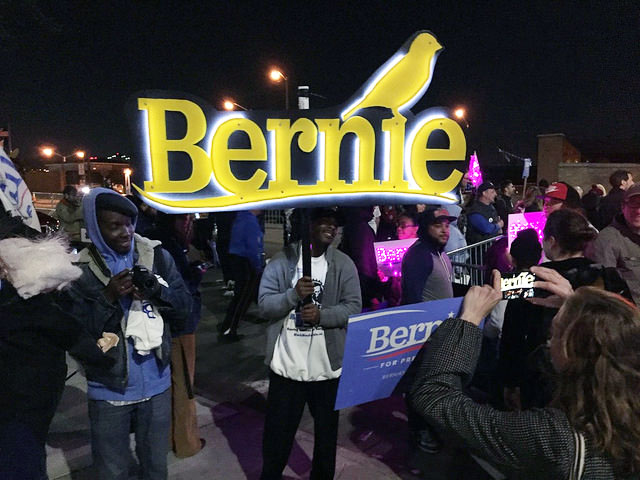 Supporters display at light up sign for Sanders at the  Brooklyn Navy Yard before the Democratic presidential debate yesterday or Sanders. by Leann Garofolo

They came from all over the country to take on the more subdued Hilary Clinton supporters who gathered on the opposite corner carrying the official “I’m With Her” signs. But it was the eclectic array of homemade Sanders campaign gear that stole the show on this chilly spring night.

“I have never come out like this for anybody,” said Kyle Cranston, of South Hampton in Long island, New York. He was decked out in a black “Feel the Bern” t-shirt, topped with a blazer sporting colorful Bernie buttons. His black fitted baseball cap said “Bernie for President,” and he carried a blue sign emblazoned with the same logo. 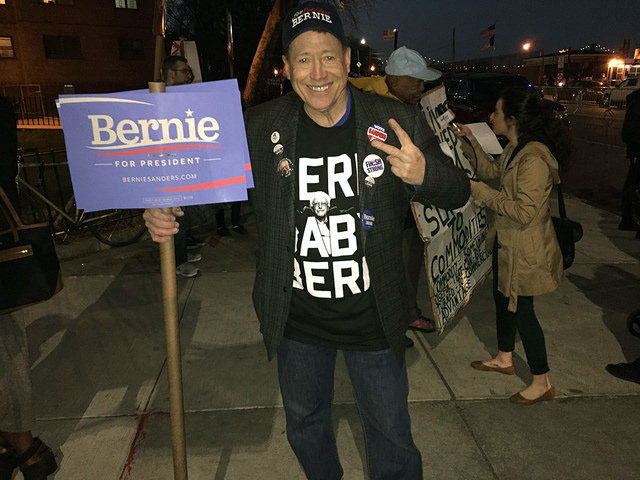 Kyle Cranston, of South Hampton in Long Island, N.Y. was decked out in Sanders attire outside of the debate venue. by Leann Garofolo

It was not Cranston’s first time braving the cold for Sanders. In February, he attended the New Hampshire primary, traveled to Boston for Super Tuesday, and has been making phone calls and canvassing for his candidate.

The stakes were high for the democratic candidates who both have roots in New York. Sanders were born in Flatbush, Brooklyn to Jewish immigrants, and Hillary Clinton was the city’s senator for eight years. She calls New York her adopted home.

Liz Sawyers, of Prospect-Lefferts Gardens, Brooklyn, was the coordinator of the Communication Workers of America (CWA) members who attended the rally. Under her black winter coat was a white t-shirt that said “Bernie is bae”, with a sketch of the candidate’s face inside a red heart.

“Earlier this afternoon, just as the sun was going down, the CWA members marched down the street,” said Sawyers. “We had like, 600 CWA members here. It was great.” 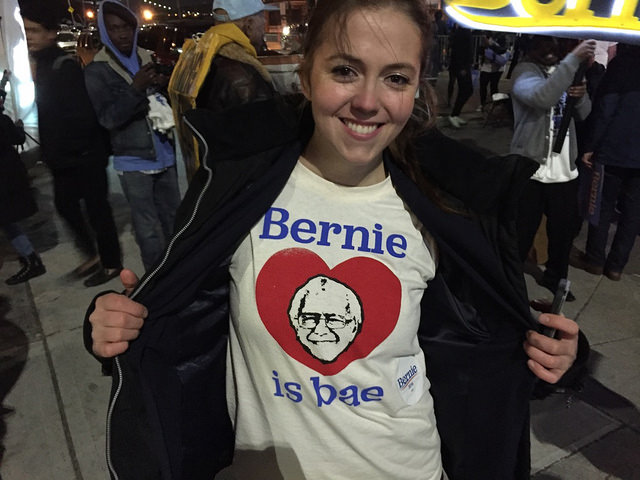 Liz Sawyers organized a CWA rally of over 600 people to show support for he candidate. by Leann Garofolo

As an independent business owner teaching public speech and rhetoric, Sawyers is passionate about fair labor. Earlier in the week, the CWA began striking back against Verizon after the parties failed to negotiate a fair contract.

Sanders showed his support and solidarity for the workers on Wednesday when he joined a crowd of 2,000 CWA Verizon and Verizon Wireless workers on the picket line in Brooklyn.

But this rally was also interactive.

A Playstation was set up where kids and adults got to play Bernie “jumping” over obstacles to reach the end goal of being elected as president. A virtual Bernie was navigated as he jumped over things such as “Big Oil Problem” and “Dodged Another Bush.”

“You basically jump over corporate interest and Wall Street bulls and try and get to the end and try and get elected,” said the game’s creator, Grayson Earle of the game that was projected on a big screen. He made the game in just about two weeks in his spare time with The Illuminators, a political art project based in N.Y.C. “If you don’t win you just go back to the community and you reorganize and you try again.”

While many came to show their support, others came to rally for other causes that were near and dear to their heart.

Paul Schuberg, of Rockaway, Queens, stopped by with a “War Wagon” to support veterans.

His mobile cart was piled thick with campaign buttons, along with a donation jar adorned with the American flag. His goal was to sell buttons and raise money to donate to homeless vets who need food, shelter, and permanent housing.

While not an actual veteran himself, he called himself a veteran of “the war on poverty, the war on injustice.” Schubert said he votes based on the candidate, not the party.

“I am a voter,” said Schuberg. “I vote for the best person for the job after examining their history, their record, very carefully.”

“I think we need to have a conversation about that,” said Siegel as he continued to give out flyers to passerby. According to the flyer’s colorfully coordinated pie chart, 54 percent of federal income tax dollars are spent on the military budget, which Siegel viewed as a problem.

“Bernie at least says that we should freeze the military budget at its current level,” said Siegel. “I’m for protecting whatever is left of social equality in our country.”

A group called Black Men for Bernie also came out to support him.

Still, others at the rally just wanted to get in on the action.

April Brooker, of Sunnyside, Queens, had hopes of getting inside the venue. She carried a puppet of Donald Trump, who she referred to as “Donald J. Tramp.” Despite the puppet, she did not say she wasn’t a Trump supporter or which of the democratic candidates she supported.

“I’m investigating both sides,” said Brooker, mimicking the Trump puppet as though it were the one speaking. “I like a lot of what Bernie Sanders has to say, but I like the experience Hillary has, so that’s why I’m very eager to see how it turns out.”