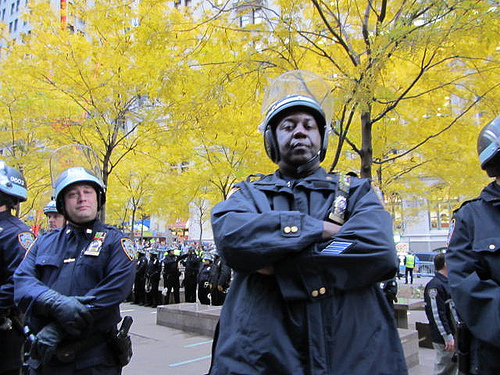 NYPD occupied Zuccotti Park this morning, refusing to allow protestors to re-enter after they were evicted by police last night. Photo by Chris Palmer

Shortly after midnight, about 1,000 New York City Police Department officers in riot gear cleared Zuccotti Park of the Occupy Wall Street protesters who have called the downtown park home for the past two months.

The park was completely emptied of protesters, tents, sleeping bags, books and other belongings, by the New York City Police Department, the Fire Department and Sanitation Department, within a few hours.

“Protestors have had two months to occupy the park with tents and sleeping bags. Now they will have to occupy the space with the power of their arguments,” Mayor Bloomberg stated in a press release.

Bloomberg cites dangers to public health, safety and accessibility for the clearance.

“The dangers posed were evident last week,” he stated in the press release. “When an EMT was injured as protestors attempted to prevent him and several police officers from helping a mentally ill man who was menacing others. As an increasing number of large tents and other structures have been erected, these dangers have increased.”

Occupy Wall Street demonstrators tied themselves to structures in the park to evade eviction, according to several protesters who were present when the removal process started around 1 a.m.

Kimberly Howard, 25, from Queens, confirms there were about 1,000 police officers present, some of which worked to remove protesters from the park.

“One female was in the position where she was sitting on the floor,”Howard said. “They lifted her up by all fours and went back. There were people chained to the kitchen. I’m hearing a lot of [accounts] of pepper spray, beatings, some people got arrested. These were the people there for it.”

Howard said trucks and police vans showed up after she left an OWS Spokes Council meeting.

“I witnessed Emergency Service Police come in with two officers standing in the streets [directing] multiple Emergency Service Unit Trucks,” she said. “They were moving them very fast. You could hear the engines, stop and speed up again. So, with that I knew something was coming up.”
There are various accounts of individuals being pepper sprayed after groups of protesters tried to get back to the park after police officials secured a circumference of two blocks around the block with barricades.

“I was pepper sprayed,” said Nicole Carty, 23, who had traveled from Brooklyn at 1 a.m. after getting Emergency Response text messages from OWS group members. “At least 30 people were pepper sprayed. There was a lot of police brutality all throughout last night.”

Several individuals who were pepper sprayed were led by others to open cafes around 2 a.m. where they were able to douse their eyes with a solution of milk and water.

Carty was one of the many people who received text messages from those in Zuccotti Park about the surprise clearance. She said groups of people walked the hours trying to figure out a way to get back to the park. NYPD officers forbid her from going towards the park, forcing her to walk north.

Before walking further away from the park, having arrived on the scene in a taxi cab, Carty recalls seeing the protesters who chained themselves to structures.

“I saw at least 40 people were locking down the park,” Carty said. “They eventually had to be cut out of those locks. Others kicked out of the park probably 100, 200 at least. They were told to go somewhere else. That was what I witnessed.”

People were trying to get through barricades set up on Broadway. Adding to the 200 people already on the scene, individuals were arriving by train and cabs, according to several witnesses who congregated in Foley Square and all around Lower Manhattan this morning to figure out the group’s next steps.

“They are pushing us against it,” Carty said. “They had these plastic buckets, they have helmets. They are literally squeezing people, crushing them against the wall. And people were trying to not be crushed against the walls. I saw a lot of brutality.”

This morning, Carty and Ethan Buckner, 20, from Minneapolis, Minn, and a small group of OWS supporters were making their way from Foley Square towards a large congregation in a park next to Sixth Avenue and Canal Street at approximately 9:30 a.m. Hundreds of protesters filled the square next to roads leading to the Holland Tunnel. More than a dozen police vans met the protesters as they settled.

Buckner witnessed people trying to “soft block” intersections around Zuccotti Park, but the group had trouble with the number of police officers “easily over 1,000” outnumbering those that were there.

“We realized they started bringing trucks of our tents out of the barricades,” Buckner said. “We decided to lock down the intersection. They threw away everything, books, tents, computers,everything.”

Several witnesses at the scene state it was mayhem as people were trying to figure our what to do. Many of the OWS demonstrators kicked out of Zuccotti Park found themselves at Foley Square, a few blocks north of City Hall.

Natas Rivera, 25, from Allentown, Pa., was at Foley Square after traveling throughout the night to make it in time to “protect” the movement.

“I watched it live,” Rivera said. “I saw cops taking people’s tents and throwing them into the street. They were literally throwing everything out over the fence. They started throwing stuff. I was ready to get arrested. I fight for what’s right.”

Rivera says the entire circumference of Foley Square was filled with people before the majority of protesters left the square for a victory march, learning this morning that there was a “Temporary Restraining Order” in favor of the protesters.

A lawyer on site at Foley Square would not speak on the record, but confirmed that OWS received word that there is a hearing scheduled for 11:30 a.m. called upon by Manhattan Supreme Court Justice Lucy Billings regarding the demonstrators rights to set up camp at Zuccotti Park.
Meanwhile, OWS is moving forward with plans to “liberate space and build a movement” with an ongoing demonstration at Sixth Avenue and Canal Street.

[…] Original Here: Occupy Wall Street booted out of Zuccotti Park Share this:TwitterFacebookLike this:LikeBe the first to like this […]