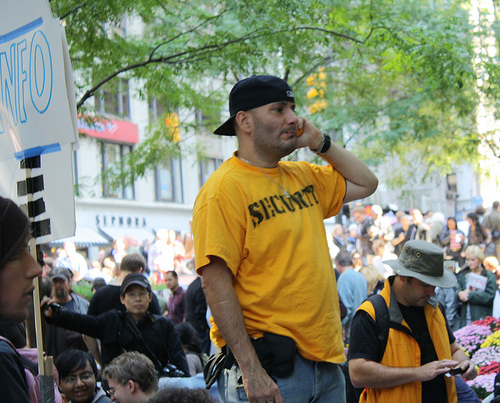 Paul Isaac, of Flatbush, Brooklyn overlooks Zuccotti Park, surveying the crowd for signs of confrontation. As a member of the security force within occupy wall street, Isaac coordinates with other members via hand held radio, if incidents break out. Photo by Eric Zerkel

During the 18 days Occupy Wall Street has commandeered lower Manhattan’s Zuccotti Park, confrontation appeared to be limited to clashes between protestors and police. But with growing support, vocal public dissent has begun to penetrate the ranks of the Zuccotti stronghold, leaving protestors scrambling for methods to manage the swollen ranks of the occupied faithful.

One such method is the creation of Occupied Security, a rag tag group of 20 or so protestors that monitors the park in search of altercations.

Suited up in a yellow t-shirt with the word “security” crudely stenciled on the front, Occupied Security member Paul Isaac, 42, of Flatbush, Brooklyn, stood atop one of the many elevated park planters, relaying information via a hand held radio to other security members scattered throughout the area.

“We are a non-violent, peaceful demonstration, and that’s the way we would like to keep it,” Isaac said. “Unfortunately, we have agent provocateurs who are looking to distract the message of peace and come in and cause a scene. We’re trying to pick out these people before any problems occur.”

Yet despite their collective efforts, altercations do occur. After one man came into the park today and called the protestors, “Welfare communists,” a verbal spat ensued between about 20 protestors and the dissenter. Handheld foghorns blared, and the protestors drowned out the dissenter’s voice with a mocking chorus of the late 60’s hit, “Na Na Hey Hey Kiss Him Goodbye.”

But the dissenter remained, and the situation escalated, causing Patrick Dore, 23, of Bay Ridge, Brooklyn to jump into action.

“He (the dissenter) was making a lot of people feel uncomfortable,” Dore said. “When someone comes in here, in this environment, it gets crazy, you get amped up, everyone’s adrenaline is pumping. So I try to remain calm, and that gets other people to remain calm.”

Dore said he was a part of a de-escalation force within the protestors, a group separate from the security force that sought to maintain the peace by encouraging others to ignore dissenters and walk away from conflict.

In spite of the protestors collective efforts, the dissenter remained, prompting Dore and others to seek out police assistance. The police declined to help end the situation, Dore said, because the officers maintained that the confines of the park were an open sphere of protest.

“If that had happened outside of the park and on the sidewalk than it would have been a different story,” Dore said.

The situation diffused itself, as the dissenter retreated out of the park and into the ranks of the public, leaving to jeers from the protestor faithful.

Although Dore failed to obtain police assistance, many of the security force members believed that police would have no problem coming to their aide. 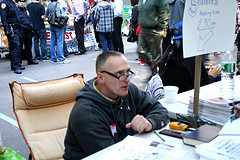 Michael Ruso, of Queensbridge, Brooklyn, mans a post at the security information center. As a former Marine, Ruso said he is no stranger to public security. Photo by Eric Zerkel

“We’re here primarily in an assistant capacity,” said Michael Ruso, 45, of Queensbridge, Brooklyn, who manned a post at the information center for security and is a former Marine. “If something gets out of hand obviously the police will take over.”

Though the officer declined to speak on the matter, the disparity between police orders and protestor security forces poses a potential risk, should situations escalate.

“Police are going to follow the orders of their commander,” said Issac. “I’m sure if the situation gets out of control, they will come in and render us assistance.”

Ruso said there have also been incidents involving not just those with opposing views coming into the camp, but also fights within the Occupy Wall Street crowd.

“We’ve had a couple of incidents with people trying to be trouble makers, but what are you going to do?” Ruso said. “We can’t kick people out. This is a free public space. Live and let live, you know?”