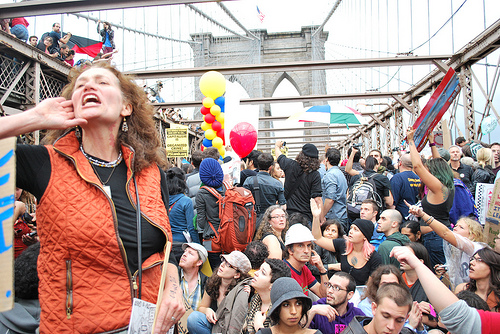 Occupy Wall Street protestors are blocked in on the Brooklyn Bridge. Photo by Joann Pan.

Around 700 Occupy Wall Street protestors were arrested yesterday afternoon after they staged a sit-in on the Brooklyn Bridge.

About 2,000 protestors attempted to march across the bridge around 4 p.m. As marchers beat their drums, chanting, “This is what democracy looks like,” cars cleared into a single file, creeping alongside the road until all traffic was at a standstill. Police officers walked along the highway directing vehicle traffic to the side. Police allowed protestors to march onto the bridge.

Where the bridge meets the South Street Seaport, police officers barricaded the protestors in with orange plastic netting. The crowd was so big that protestors didn’t know they were being blocked in.

When they saw they were being blocked, protesters then tried to induce a sit-in on the bridge to avoid arrest.

“They can’t arrest all of us,” someone shouted.

As the netting closed in, protestors climbed up the wall of the Brooklyn Bridge, about 10 to 15 feet, and onto the elevated walking path.

Stephanie Thibert, 26, of Park Slope, Brooklyn, was at the front of the march until she fell back and helped those who lagged behind. This was her first day with the movement.

“I think they purposefully diverted the pack away just to arrest them,” Thibert said. “I was actually with the first group then I fell behind on the other side of the bridge to watch the rest of the group. Everyone above on the walking path were trying to help those below.”

Sandra Thom, 53, and her two children, who were visiting from Virginia Beach, Va., saw police officers guiding the massive crowd of protestors onto the walking path and the bridge’s roadway.

“I saw that [the road] split,” Thom said. “I said ‘Let’s stay on this side of the street. Something is going to happen up there.’”

All the protestors on the roadway were arrested and bused off to nearby precincts, resulting in a bridge closure on one side for nearly five hours.

Occupy Wall Street protestors filtered into Brooklyn Bridge Park right after the protest and tried to compile a list of those arrested.

Aliya Birdoff, 18, of Harlem, Manhattan, believes this march will have a great impact on the momentum of the movement.

“This is really exciting. I think this is exactly what needs to be happening,” she said. “I think that’s how you get more coverage and that’s how a movement grows. I don’t know how I feel [about the arrests]. I feel like there was a lot of trickery going on.”

The movement continues to grow with chapters in cities across the nation including Chicago, Los Angeles, Cincinnati, Ohio; Omaha, Nebraska; Albany, N.Y.;Dallas, Texas; and Sante Fe, N.M.; and another 21 cities worldwide.

[…] Street has commandeered lower Manhattan’s Zuccotti Park, confrontation appeared to be limited to clashes between protestors and police. But with growing support, vocal public dissent has begun to penetrate the ranks of the Zuccotti […]

[…] the National Day of Action or N17 it includes a march from City Hall to the Brooklyn Bridge, the site of 700 arrests on Oct. […]

[…] more: 700 Occupy Wall Street protestors arrested on the Brooklyn Bridge News — By Joann Pan on October 2, 2011 Share this:TwitterFacebookLike this:LikeBe the first to like […]

[…] was also one of 700 protestors arrested last October during an attempted sit-in on the Brooklyn Bridge. But the strategies have changed since then, and […]