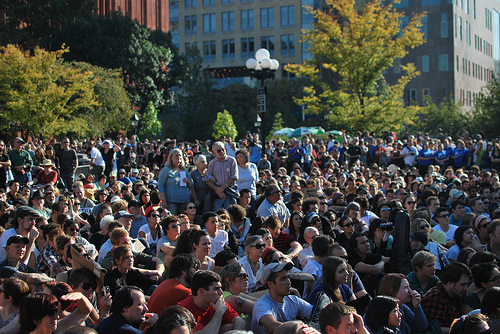 The rally was called upon by OWS organizers in Washington Square Park to accommodate the high number of demonstrators. Photo by Joann Pan

About 2,000 Occupy Wall Street protestors marched and drummed to Washington Square Park yesterday, filling the park to the brim in another demonstration of the growing movement.

No one was arrested, even though the conditions were so cramped in the center of the park that there was literally no room to move.

The focus of the rally was growth. Various members of the OWS working groups – including medical, food and sanitation workers – were present to introduce themselves, explain their roles in the movement and outline the practical tasks needed to keep the movement going, such as the opening and storing of donations that are coming in from around the world.

One by one organizers spoke to the massive crowd using “People’s Mic,” a communication tactic that doesn’t use illegal bullhorns or amplifiers. Instead, voices boomed in unison echoing each speaker’s short sentences so everyone could hear.

“The 99 percent have heard our call and they are supporting us,” a representative from the shipping and inventory working group said. “Our economy is strong and as we progress. Let’s show Wall Street the right way to handle stock.”

The crowd was also urged to start occupations in their own neighborhoods.

“You must start your own General Assembly in your community and occupy your own spaces,” speakers shouted. “Occupy Wall Street is a call to action. The future of this movement lies in our commitment to create the world we want to live in.”

The audience reacted with fingers wiggling up in approval.

Jaclynn Chiodini, 22, of Amherst, Mass., was in the crowd listening carefully for ways to support the homegrown revolution on her college campus. She started the Occupy University at Massachusetts chapter with friends and held a student walkout last week with nearly 200 participants.

“The inspiring thing about Occupy Wall Street is that it spreads to every single city,” Chiodins said. “We wanted to do something in our town and we realized as students, the only place we have direct power is at our university.”

Chiodini is staying the rest of the weekend at the overcrowded Liberty Plaza.

The movement is growing after four weeks of protest. There are “Occupy Together” events scheduled in 1,040 U.S. cities.

“We want a General Assembly in every backyard,” said Kira Annika, 19, of Portland, Ore.

Annika was one of the first protestors to arrive a few days before Sept. 17, the official start date of the movement. She is now with the public relations working group as an OWS spokesperson.

Annika believes the OWS General Assembly that occur twice a day is an essential part of the movement. It is part information session, part decision-making body and open forum. It breeds the idea that everyone gets heard, no matter what is said, and everyone gets to use the “People’s Mic.”

“The whole idea is that we can support each other,” she said.

She disagrees with critics who say the movement lacks direction. The end goal of all these occupations sprouting up is the rebuilding the American dream, Annika said.

“They are missing the point,” Annika said. “The demands right now are not the point. We don’t need concrete, specific, legislative goals and amendments. We need this process. This process is our demand right now. And we are winning, it’s coming up all over the place.”

She points to the solidarity of the movement and the elements of the camp that people are failing to see.

“Here we have healthcare, food, and shelter, if they would let us, air to breathe,” Annika said. “We have all of the basic human needs, and they are provided for anyone that comes through.”

As thousands continue to stream through Zuccotti Park daily, organizers said they are currently thinking about starting a second location locally. Occupy Brooklyn and Occupy Washington Square Park are ideas that have been thrown around.

Nicole Carty, 23, of Williamsburg, Brooklyn, who has been following the movement from the beginning, agrees that the overarching goals are what make it revolutionary and beautiful.

“The way it is constructed, it really is inclusive and very much different in that,” Carty said. “People can come and talk about their grievances. We are united on corporate greed that’s the bottom line issue, how we all approach it is different and this movement has the space for that, which is really important.”